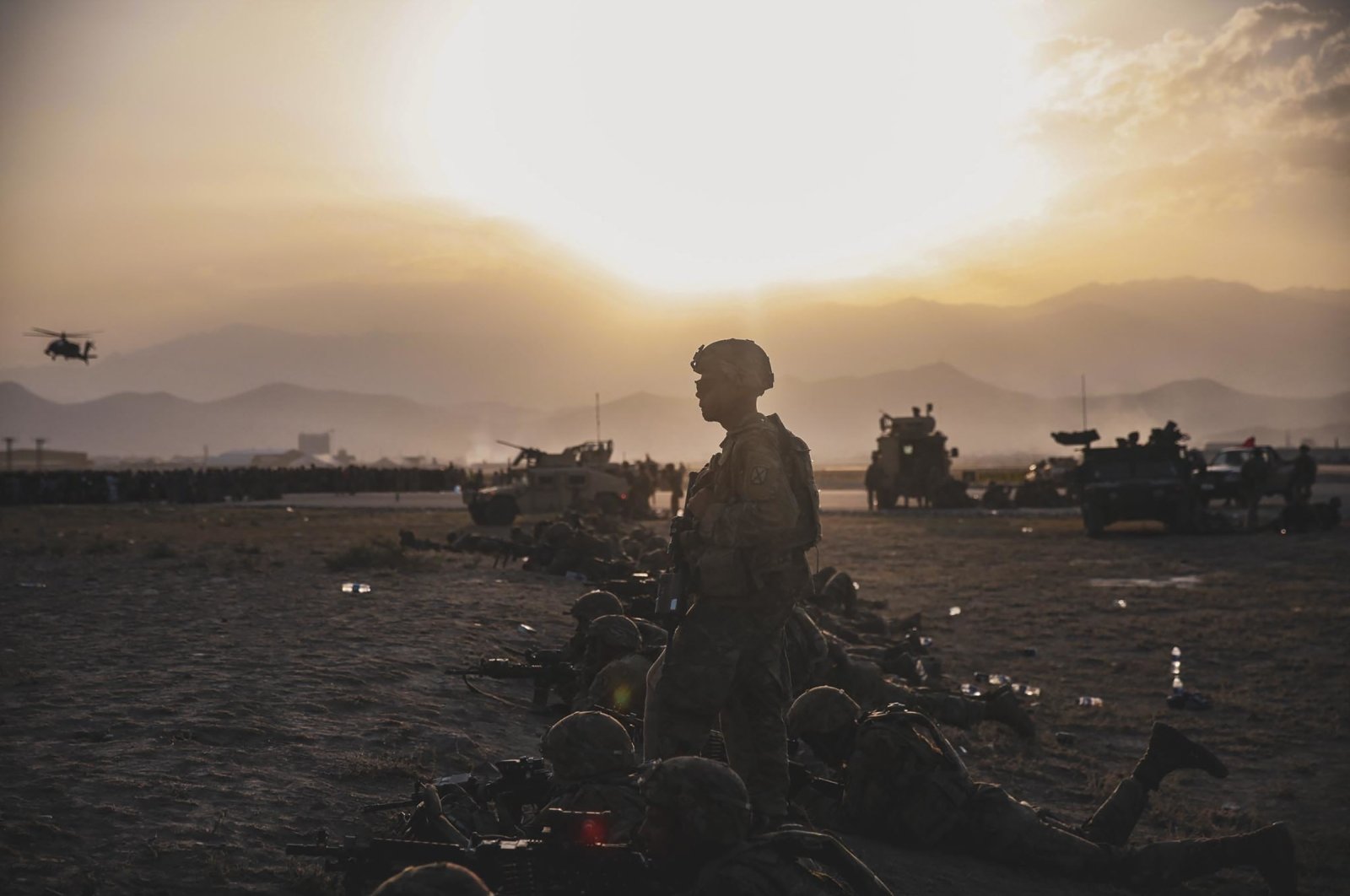 U.S. President Joe Biden said military forces will stay in Kabul until all Americans are evacuated, even if the Aug. 31 deadline passes, while the Taliban's massive seizure of weaponry, as well as footage of militants parading in U.S.-made armored vehicles, has brought only embarrassment and humiliation to the White House

U.S. President Joe Biden said he is committed to keeping U.S. troops in Afghanistan until every American is evacuated, even if that means maintaining a military presence there beyond his Aug. 31 deadline for withdrawal.

Biden also pushed back against criticism that the U.S. should have done more to plan for the evacuation and withdrawal, which has been marked by scenes of violence and chaos as thousands attempted to flee while the Taliban advanced.

In an interview Wednesday with ABC News’ George Stephanopoulos, Biden said the U.S. will do "everything in our power” to evacuate Americans and U.S. allies from Afghanistan before the deadline.

Pressed repeatedly on how the administration would help Americans left in the nation after Aug. 31, Biden said, "If there’s American citizens left, we’re gonna stay till we get them all out.”

Up to 15,000 Americans remain in Afghanistan after the Taliban took full control of the nation last weekend. Defense Secretary Lloyd Austin said earlier Wednesday that the U.S. military does not have the forces and firepower in Afghanistan to expand its current mission from securing the Kabul Hamid Karzai International Airport to collecting Americans and at-risk Afghans elsewhere in the capital and escorting them for evacuation.

The question of whether those seeking to leave the country before Biden’s deadline should be rescued and brought to the airport has arisen amid reports that Taliban checkpoints have stopped some designated evacuees.

"I don’t have the capability to go out and extend operations currently into Kabul,” Austin said. "And where do you take that? How far do you extend into Kabul, and how long does it take to flow those forces in to be able to do that?”

Austin, a retired four-star Army general who commanded forces in Afghanistan, spoke at his first Pentagon news conference since the Taliban swept to power in Kabul on Sunday. He said the State Department was sending more consular affairs officers to speed up the processing of evacuees.

"We’re not close to where we want to be” in terms of the pace of the airlift, Austin said. He said he was mainly focused on the airport, which faced "a number of threats” that must be monitored. "We cannot afford to either not defend that airfield or not have an airfield that's secure, where we have hundreds or thousands of civilians that can access the airfield,” he said, adding that talks with the Taliban were continuing to ensure safe passage for those evacuating.

Austin said there were about 4,500 U.S. troops at the airport, maintaining security to enable the State Department-run evacuation operation that has been marked by degrees of chaos and confusion. Biden, however, told ABC that there wasn’t anything his administration could have done to avoid such chaos.

"The idea that somehow, there’s a way to have gotten out without chaos ensuing, I don’t know how that happens,” he said.

Senior U.S. military officers were talking to Taliban commanders in Kabul about checkpoints and curfews that have limited the number of Americans and Afghans able to enter the airport. John Kirby, the chief Pentagon spokesperson, said that over 24 hours about 2,000 people, including 325 American citizens, had left aboard 18 flights by U.S. Air Force C-17 transport planes.

The number of departing Air Force flights was likely to be similar in the coming 24 hours, Kirby said, although he said he could not estimate how many people they would carry.

Nearly 6,000 people had been evacuated by the U.S. military since Saturday, a White House official said Wednesday night. Kriby said the administration was considering its options for dealing with a separate but related problem – the abandonment by Afghan security forces of an array of military equipment, weapons and aircraft that have fallen into the hands of the Taliban or other militant groups.

"We don't, obviously, want to see our equipment in the hands of those who would act against our interests or the interests of the Afghan people and increase violence and insecurity inside Afghanistan,” Kirby said. "There are numerous policy choices that can be made, up to and including destruction.”

He said those decisions had not yet been made. Kirby said several hundred more U.S. troops were expected to arrive at the airport by Thursday. An Air Force unit arrived overnight that specializes in rapidly setting up and maintaining airfield operations, Kirby said.

And he said Marines trained in evacuation support have continued to arrive and will assist in getting civilians onto flights. The top congressional Republicans, Rep. Kevin McCarthy and Sen. Mitch McConnell, asked Biden on Wednesday for a classified briefing with the "gang of eight” – the top Democrats and Republicans on the House and Senate intelligence committees as well as House Speaker Nancy Pelosi, Senate Majority Leader Chuck Schumer, McCarthy and McConnell.

McCarthy and McConnell said they want a briefing on the number of Americans still in Afghanistan and the plans to evacuate those outside of Kabul. Their letter prompted Pelosi spokesperson Drew Hammill to tweet that she had already requested such a meeting. He also said House members will receive an unclassified telephone briefing Friday and an in-person briefing Tuesday.

Videos of Taliban fighters parading in U.S.-made armored vehicles, wielding U.S.-supplied firearms and climbing on American Black Hawk helicopters after the defeat of Afghan government forces have embarrassed the White House. The group, who easily captured control of the country after a monthslong campaign, seized huge amounts of weaponry, equipment and munitions from the Afghan armed forces, most of it supplied over the past two decades by Washington.

The images are underpinning a political attack on Biden for mishandling the U.S. withdrawal from the country after 20 years of war. Most of the equipment had been seized from the Afghan forces who, despite two decades of training and tens of billions of dollars from the United States, conceded the capital Kabul over the weekend without a fight.

"We don't have a complete picture, obviously, of where every article of defense materials has gone. But certainly, a fair amount of it has fallen into the hands of the Taliban," said White House National Security Advisor Jake Sullivan on Tuesday.

"Obviously, we don't have a sense that they are going to readily hand it over to us," he said.

Republicans seized on the admission to pounce on Biden.

"Thanks to Biden's botched withdrawal, the Taliban is better equipped today than they ever have been," said Republican national chair Ronna McDaniel.

According to official figures, the U.S. military supplied the Afghan army with more than 7,000 machine guns, 4,700 Humvees and 20,000 grenades in recent years.

The Afghans have also received artillery and reconnaissance drones from Washington, as well as more than 200 aircraft, both fixed-wing and helicopters. Their continued operation depended heavily on U.S. technical support and parts, however.

According to photographs published Wednesday by Janes, the defense specialists, some 40 Afghan military aircraft were flown into Uzbekistan over the past week to escape the Taliban advance, including five UH-60 Black Hawk and 16 Russia Mi-17 helicopters and 10 A-29 Super Tucano attack airplanes.

In its 16-month drawdown, the Pentagon removed huge amounts of its own equipment from Afghanistan and handed some of it to the Afghan army. But hardware supplied to the Afghan forces that is now in Taliban hands has raised concerns. Kirby said Wednesday that the department is looking at the issue.

The captured arms and vehicles only expand the Taliban's powers in limited ways, experts say.

Even then, it makes them at best a limited direct threat to better-armed neighbors. On the other hand, the massive amounts of small arms and munitions they inherited, said Schroden, could "conceivably find their way to many different parts of the globe and to a variety of other terrorist groups."

"Probably the best thing the U.S. can do at this point is to work with Afghanistan's neighbors to try and interdict the transport of any of this equipment across the country's borders," he said.