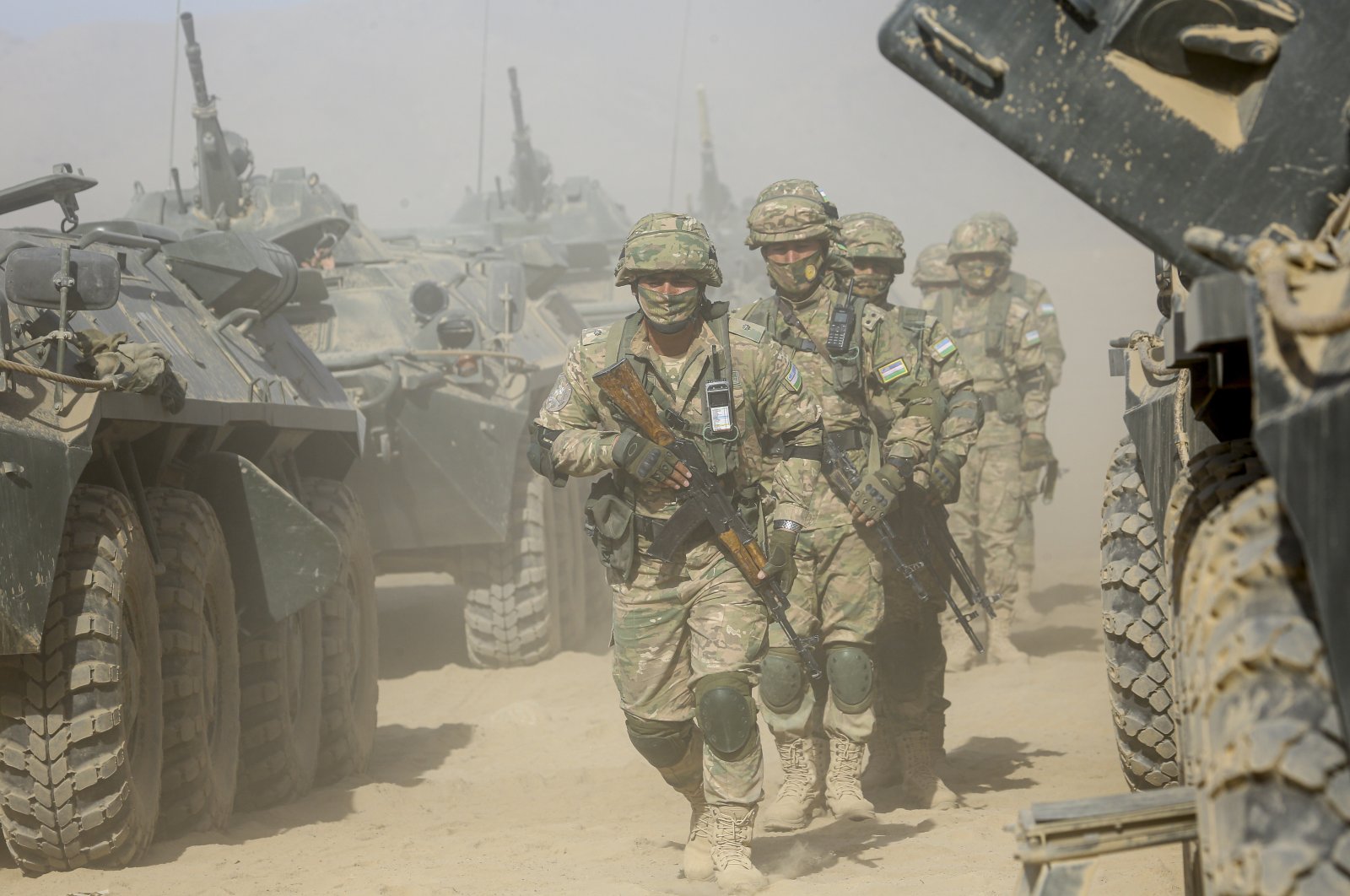 Uzbekistan's troops attend joint military drills together with Russia and Tajikistan at Harb-Maidon firing range about 20 kilometers (about 12 miles) north of the border with Afghanistan, in Tajikistan, Aug. 10, 2021 (AP Photo/Didor Sadulloev, File)
by DAILY SABAH WITH AA Aug 18, 2021 9:41 am

Western countries, particularly the Netherlands, Sweden, France and the United Kingdom, have received heavy criticism for abandoning Afghan personnel in Kabul and failure to evacuate Afghans working for them in their fight against the Taliban after a 20-year presence in the war-torn country.

While a petition has been launched on change.org for evacuation of Afghan workers who worked for France's embassy as 60 translators working for the French army, Britain was denounced for being late in safely removing Afghans working for British forces and personnel in Afghanistan.

"When Afghan employees of the Dutch embassy in Kabul arrived at the office on Sunday, they were flabbergasted to find that the Dutch had all left without telling them anything. They just left," the newspaper said.

U.S. Professor of Journalism from Stockholm University Christian Christensen wrote on Twitter post Tuesday that Swedish staff "refused to answer calls from the Afghan staff and even blocked their official email accounts."

Swedish staff left the embassy as their Afghan colleagues worked. Then, they refused to answer calls from the Afghan staff and even blocked their official email accounts. Left the country. https://t.co/t1JqChlOnC

The Swedish media outlets said that while their 19 nationals in Sweden's Embassy in Kabul were transferred to the U.S. military base in the Qatari capital Doha via helicopter and plane on Monday, the local Afghan employees were abandoned.

Responding to a question on when these Afghans would be taken out of Kabul, Swedish Foreign Minister Ann Linde said at a news conference on Monday that there was chaos in the airport.

Also, the Swedish personnel reportedly blocked even the corporate e-mail accounts of these Afghans and did not answer their phones. In an e-mail message, a group of local Afghan employees earlier notified Sweden's Expressen daily that they were abandoned by their Swedish colleagues.

According to the message, the Afghans called on the daily to be their voice as their lives were in danger and urged the Swedish government to abandon its bureaucratic process and put their lives before the laws. The group alleged that the Taliban were searching house by house to find those employed by foreign embassies and their families.

A signing petition was started on change.org to make the French Embassy in Kabul rescue 60 employees who were working as interpreters for the French army or possessed employment contracts.

An Afghan journalist, Mortaza Behboudi, said on French TV that Paris abandoned the translators who helped them in Kabul, adding: "They were not on the evacuation list of the French Embassy in Kabul. Locked in their homes, they are hiding away."

The U.K., for its part, has faced criticism for being late to evacuate the Afghans who worked for British forces and personnel in the country.

Charlie Herbert, a former senior NATO adviser to the Afghan Interior Ministry, was critical of London, saying the government was not swift enough to ensure the safety of the Afghans and evacuate them.

Herbert, also a former military commander, said he had sent letters to the British secretaries about three-and-a-half weeks ago, saying the Afghan translators should be immediately taken out of the country and relocated to the U.K., but the letter was overlooked.

Noting that several young translators and their families were hiding, he further said it was now not possible to evacuate these people.

The German army was able to remove beer and wine belonging to the German army from Afghanistan in June, but Germany's government was unable to evacuate local Afghan personnel assisting its soldiers from the country.

The Bild newspaper published a story with the headline "Germany's withdrawal from Afghanistan: Beer and wine were shipped – local staff are still staying," where the daily claimed that "there was capacity to evacuate alcohol, but not local personnel in Afghanistan."

It reported that Germany brought back 65,000 cans of beer and 340 bottles of wine earlier in June, questioning if the drinks were of more value than the local Afghan personnel.

"Those who worked for many years for Germany and risked their lives are apparently worth less than cans of beer for the federal government," the daily said in a news analysis piece.

German President Frank-Walter Steinmeier said the events unfolding at the Kabul airport were shameful and his country should evacuate the Afghans who extended help to German authorities in Afghanistan.

The images of desperation at the Kabul airport are shameful for the political West,” Frank-Walter Steinmeier told a news conference in Berlin.

Australian Prime Minister Scott Morrison said his government would not be able to help all Afghans who assisted their military units after the Taliban entered capital Kabul.

Noting that the government was committed to supporting those who provided service and assistance to the Australian Defense Force, he said this support would not reach all of the Afghans. Australia would continue to help the local Afghans that stood by the Australian force, he added.

"On-the-ground events have overtaken many efforts. We wish it were different," he said.

The Taliban captured the Afghani capital of Kabul on Sunday, sending waves of shock across the nation and the world.

Afghanistan's President Ashraf Ghani fled the country with several cars and a helicopter full of cash. Chaos and panic occurred in the capital, with thousands of Afghans flocking to the Kabul Hamid Karzai International Airport trying to escape the Taliban's revenge.

Footage depicting people hanging and falling from military planes rapidly spread on social media. At least seven people died in the stampede. The reason is not clear, but witnesses said that U.S. troops fired into the air in order to prevent the crowd from running onto the tarmac to board military flights.

Over the course of history, Western powers have invaded countries thousands of miles away in the name of "democracy." They caused a power vacuum that was quickly filled by the very forces they had set out to expel and left destruction and despair in Vietnam, Iraq and Afghanistan, never learning from each disaster.