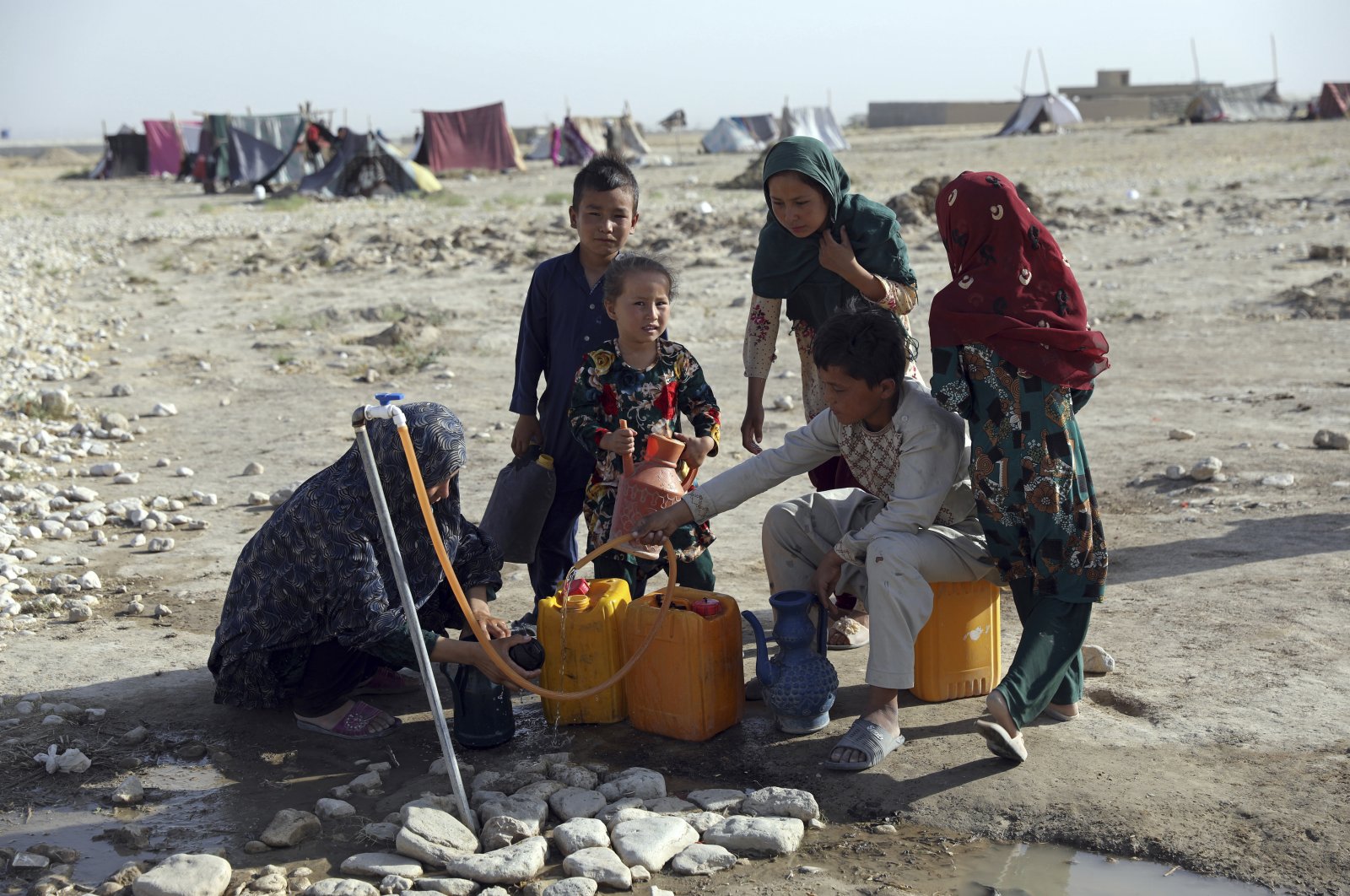 Internally displaced Afghans, who fled their home due to fighting between the Taliban and Afghan security personnel, fill water containers from a public water tap at a camp on the outskirts of Mazar-e-Sharif, northern Afghanistan, July 8, 2021. (AP Photo)
by French Press Agency - AFP Jul 17, 2021 12:31 pm
RECOMMENDED

The negotiators of the Afghan government and the Taliban met in Qatar for talks Saturday as fighting continues in the country amid the withdrawal of foreign troops. The two sides have been meeting on and off for months in the Qatari capital Doha, but the talks have lost momentum as the insurgents have made battlefield gains.

Several high-ranking officials, including former Afghan former chief executive Abdullah Abdullah, gathered in a luxury hotel after morning prayers. They were joined by negotiators from the Taliban's political office in Doha. Former president Hamid Karzai had also been due to travel to Doha but remained in Kabul, according to a source.

"We expect that it (will) speed the talks and ... in a short time, both sides will reach a result and we will witness a durable and dignified peace in Afghanistan," she told Agence France-Presse (AFP).

The Taliban have capitalized on the final stages of the withdrawal of United States and other foreign troops from Afghanistan to launch a series of lightning offensives across the country.

"We are ready for dialogue, for talks and negotiations, and our priority is to solve the problems through dialogue," Taliban spokesperson Muhamad Naeem told the Al Jazeera broadcaster ahead of Saturday's talks. "The other side must have a true and sincere will to end the problems," he said. Talks between the government and the Taliban side led by Mullah Abdul Ghani Baradar began with Koranic recitations, Naeem tweeted Saturday.

Pakistan Saturday partially reopened its side of the southern border crossing with Afghanistan, shut after the Taliban seized control of the strategic Afghan frontier town of Spin Boldak from government forces last week Muhammad Tayyab, a local paramilitary official, said the decision was taken because of "relative calm on the other side," but that the crossing would remain closed to trade.

The Taliban have also tightened their grip on the north, with clashes continuing Saturday in the stronghold of warlord Abdul Rashid Dostum, which borders Turkmenistan.

Also on Saturday, the French government flew out around 100 of its citizens and Afghans working for the embassy from the capital, as security deteriorated, a French diplomatic source said. Several other countries including India, China, Germany and Canada have flown out their citizens or told them to leave in recent days.

There have been weeks of intensifying fighting across Afghanistan, with the Taliban pressing multiple offensives and overrunning dozens of districts at a staggering rate.

As fighting raged over large swathes of Afghanistan, a war of words was also heating up between Kabul and Islamabad, after the Afghan vice president accused the Pakistani military of providing "close air support to Taliban in certain areas." Pakistan strongly denied the claim, with a foreign ministry statement saying the country "took necessary measures within its territory to safeguard our own troops and population."

Islamabad had touted a conference of regional leaders to address the spiraling violence. Instead, it announced it would delay the summit until after the Muslim festival of Qurban Bayram, also known as Eid al-Adha, due to start next week at the end of the annual hajj pilgrimage, clearing the way for the Doha gathering.

Afghanistan's southern border has long been a flashpoint in relations with its eastern neighbor. Pakistan's Balochistan province has been home to the Taliban's top leadership for decades, along with a large contingent of reserve fighters who regularly enter Afghanistan to bolster their ranks.

Foreign troops have been in Afghanistan for nearly two decades following the U.S.-led invasion launched in the aftermath of the Sept. 11 terrorist attacks. They have appeared largely out of the picture in recent months, but fears are growing that Afghan forces will be overwhelmed without the vital air support they provide.

The speed and scale of the Taliban onslaught have caught many by surprise, with analysts saying it appears aimed at forcing the government to negotiate on the insurgents' terms or suffer complete military defeat.