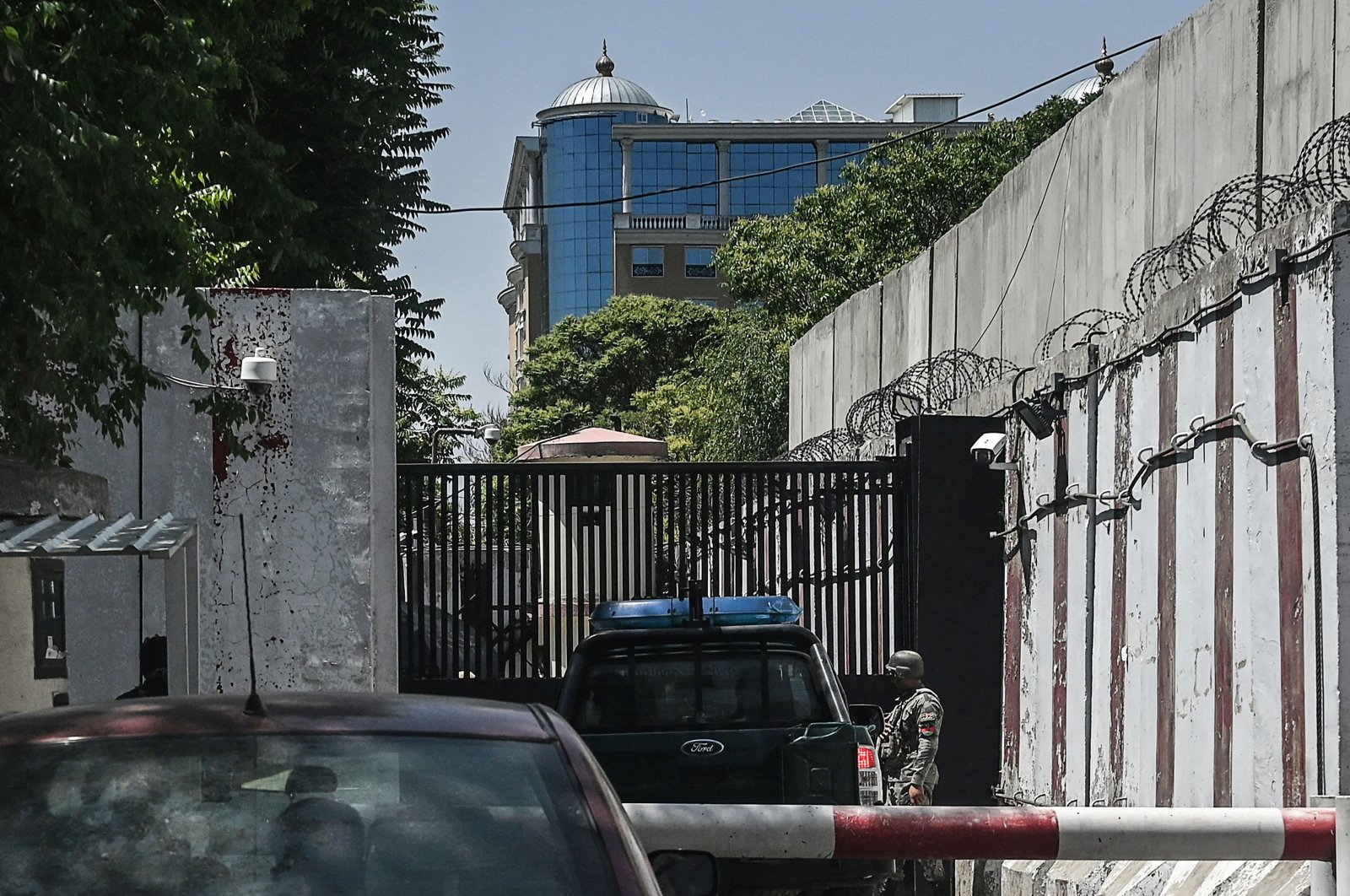 A security officer stands guard in front of an entrance gate near the Australian Embassy at the Green Zone in Kabul on May 25, 2021, after Australia abruptly announced it will shutter its embassy in Afghanistan this week over security fears as foreign troops withdraw. (AFP Photo)
by French Press Agency - AFP May 28, 2021 1:02 pm
RECOMMENDED

Australia is to close its embassy in Afghanistan's capital Kabul Friday, underlining the security fears for foreign missions and their local workers as U.S.-led troops pull out of the war-torn country.

With President Joe Biden's September 11 deadline looming, nations are weighing how they might operate without the security blanket provided by U.S. and NATO forces, while scrambling to work out what to do with thousands of Afghan staff who fear being marked as collaborators by the Taliban.

"Western countries are not fully sure about the continuation and survival of the incumbent government," he said.

The Afghan government insists it can keep the Taliban at bay, but the insurgents have made huge gains in the countryside over the past months and engage daily with local security forces.

The Taliban are now present in almost every Afghan province, have full or partial control of thousands of districts, and have effectively encircled several cities – a similar situation to 1996 when they took over most of the country.

Their tactics have spurred speculation they are waiting for the last U.S. troops to leave before launching all-out attacks to retake power by force.

The Taliban tried to calm foreign missions, telling AFP earlier this week they can "continue their operations as usual," but their track record is still fresh in memories.

When the Taliban seized control of Kabul in 1996, they entered the United Nations compound and abducted the country's former leader, Najibullah Ahmadzai, who they brutally tortured and murdered.

Two years later, the Taliban oversaw the killing of 10 Iranian diplomats at their consulate in the northern Afghan city of Mazar-i-Sharif.

Still, Musawi had some hope.

"I think Australia will not close their embassy forever in Afghanistan," he said.

"After the peace talks become clear between the government and the Taliban – or the current government might agree to power-sharing with the Taliban – in that case, Australia will reopen its embassy."

The Telegraph newspaper, meanwhile, reported Friday that Britain was preparing to relocate hundreds of embassy workers and their families to avoid a "Saigon moment" – the panicked 1975 helicopter evacuation of the U.S. Embassy in South Vietnam as the Viet Cong and communist forces seized the city.

The U.K. has expanded its scheme giving military interpreters asylum, the newspaper said, and was offering residency to embassy staff who might be at risk.

Washington said late Thursday it was "rapidly" formulating plans to evacuate potentially thousands who worked for coalition forces in Afghanistan over the past two decades.

"We recognize that there are a significant amount of Afghans that supported the United States and supported the coalition, and that they could be at risk," said Joint Chiefs Chairperson General Mark Milley.

"We recognize that a very important task is to ensure that we remain faithful to them and that we do what is necessary to ensure their protection and, if necessary, get them out of the country if that is what they want to do."

Still, thousands of Afghans are scrambling for visas or asylum, and one group was due to hold a demonstration near the fortified green zone in the capital later Friday to press their claims.

"The closure of the Australian Embassy in Kabul is not good news for Afghans," said Ahmad Rashed, 25, a bank employee.

"I believe, more embassies and NGOs might stop their operations in Afghanistan and I feel we will be abandoned once again," he told AFP.