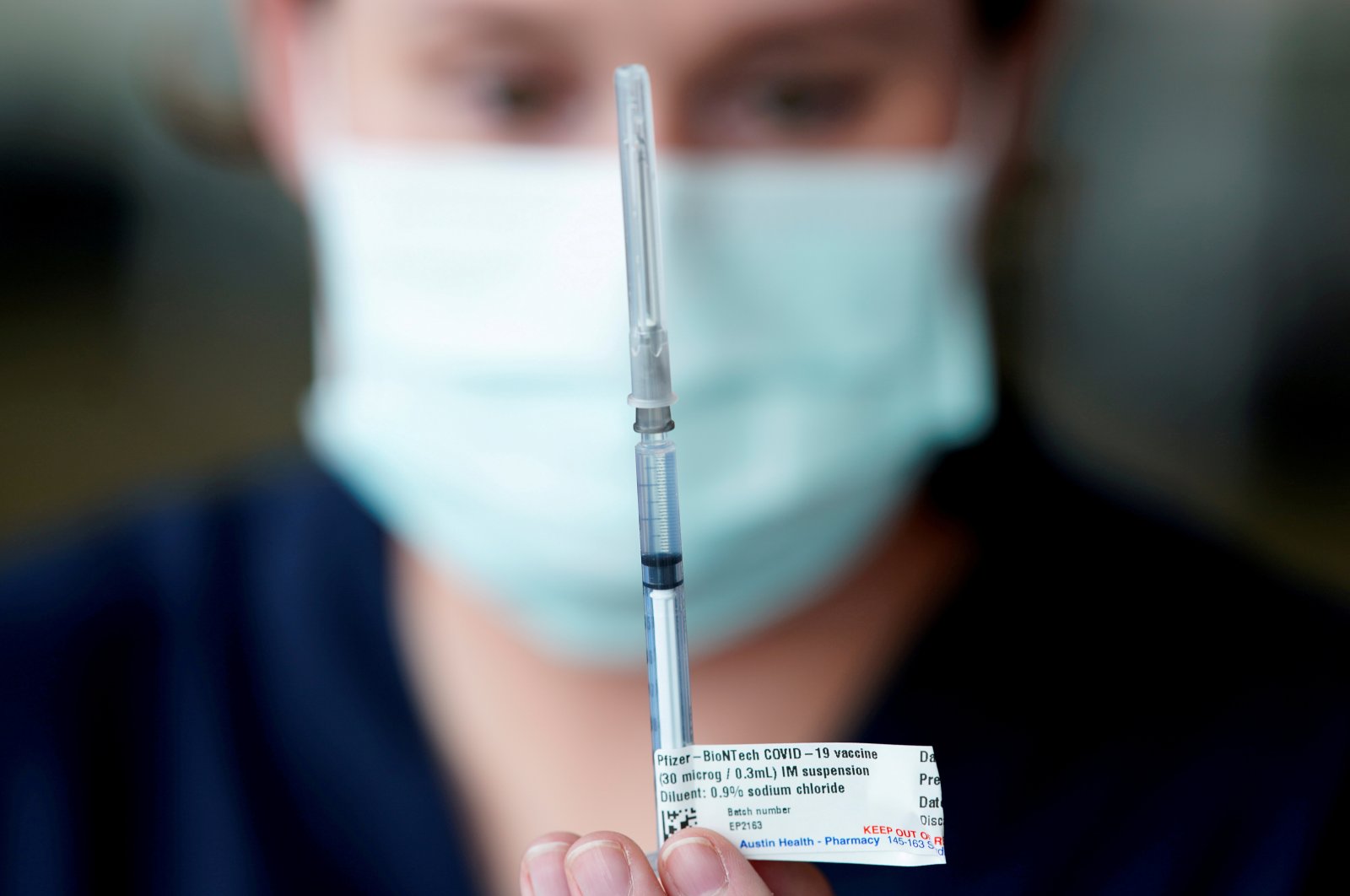 A health care professional prepares a dose of the Pfizer coronavirus disease (COVID-19) vaccine as high-risk workers receive the first vaccines in the state of Victoria's rollout of the program, in Melbourne, Australia, Feb. 22, 2021. (Reuters Photo)
by REUTERS Apr 12, 2021 10:51 am
RECOMMENDED

Australia has abandoned its COVID-19 vaccination goal to inoculate nearly 26 million of its population by the end of 2021, after the European Medicine Agency (EMA) reiterated the possibility of links between the AstraZeneca shot and blood clots and advised using the Pfizer vaccine instead of AstraZeneca's shot for people under the age of 50.

Australia, which had banked on the AstraZeneca vaccine for the majority of its shots, had no plans to set any new targets for completing its vaccination program, Prime Minister Scott Morrison said in a Facebook post on Sunday afternoon.

"While we would like to see these doses completed before the end of the year, it is not possible to set such targets given the many uncertainties involved," Morrison said. Authorities in Canberra changed their recommendation on Pfizer shots for under-50s on Thursday, after European regulators reiterated the possibility of links between the AstraZeneca shot and reports of rare cases of blood clots.

Australia, which raced to double its order of the Pfizer vaccine last week, had originally planned to have its entire population vaccinated by the end of October.

Chief Medical Officer Paul Kelly said Australia will have 40 million doses from Pfizer by the end of the year, enough to vaccinate all Australian adults. "Can I tell you on a week by week basis how much of that is coming in? Or how much will be here by the middle of the year? No, I can't. I can't answer that question," Kelly told reporters on Monday.

Pressed on whether there would be enough Pfizer vaccines for health care workers under the age of 50 by mid-year, he said only that the government still hopes to have all vulnerable groups vaccinated by then

The government is waiting for projections on how many people might refuse the AstraZeneca vaccine and how many more Pfizer or other vaccines might be needed so it can recalibrate its rollout. Kelly declined to comment on whether Moderna Inc and Johnson & Johnson were resisting sending their vaccines to Australia as the country doesn't have a no-fault vaccine compensation scheme, but said it was up to the government to consider whether Australia should have such a provision.

Australia's hardline response to the virus largely stopped community transmission but the vaccination rollout has become a hot political topic – and a source of friction between Morrison and state and territory leaders – after the country vaccinated only a fraction of its 4 million target by the end of March.

About 1.16 million COVID-19 doses have now been administered, Morrison said, noting the speed of Australia's vaccination program was in line with other peer nations, including Germany and France, and ahead of Canada and Japan.

Australia began vaccinations much later than some other nations, partly because of its low number of infections, which stand at just under 29,400, with 909 deaths, since the pandemic began.