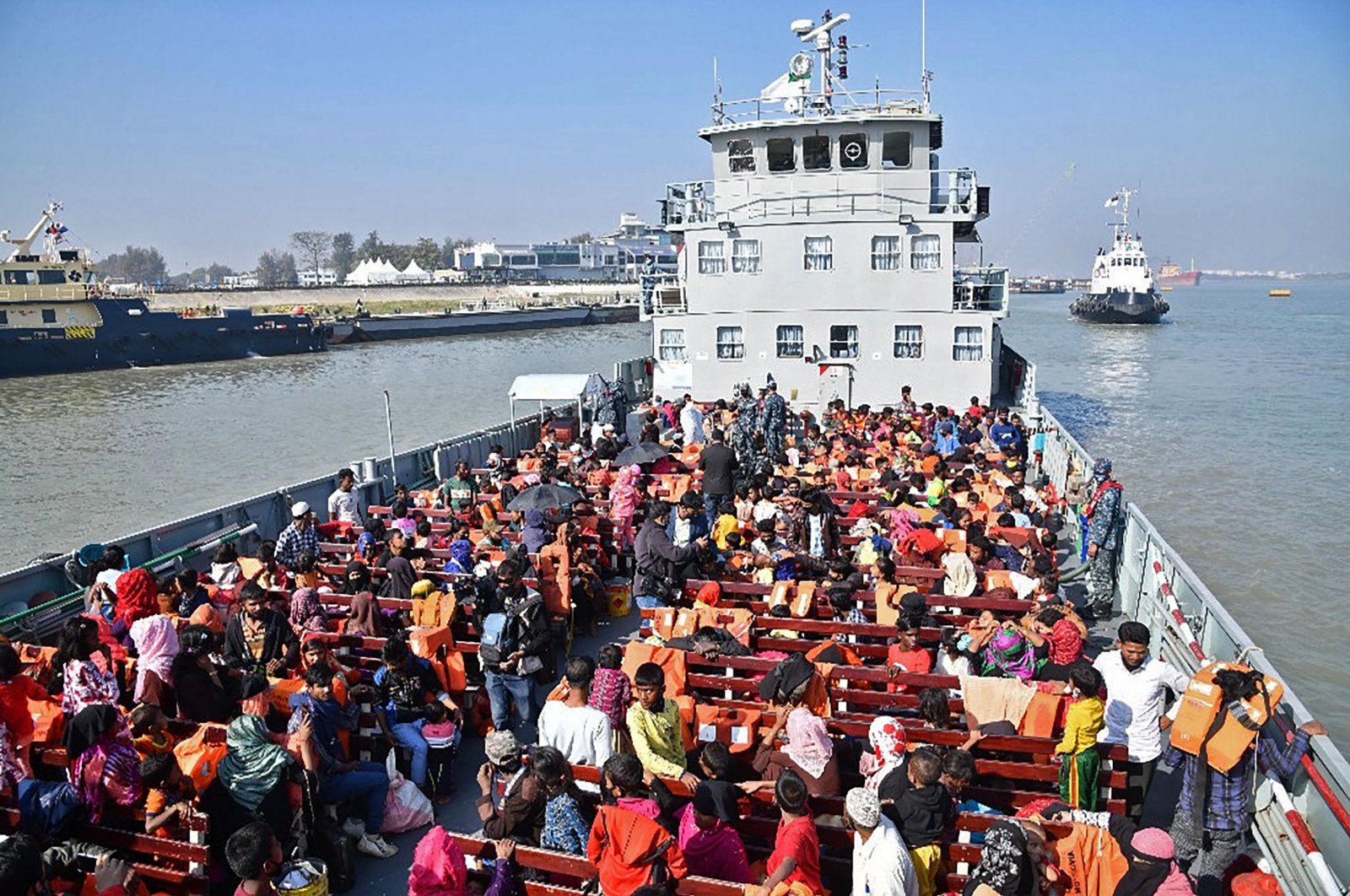 Rohingya refugees are seen on a Bangladesh Navy ship while they are being relocated to Bhashan Char Island in the Bay of Bengal, Chittagong, Bangladesh, Jan. 29, 2021. (AFP Photo)
by Daily Sabah with Reuters Jan 29, 2021 10:31 am
RECOMMENDED

More than 1,700 Rohingya refugees, members of a Muslim minority who have fled Myanmar, will be moved to a remote island with more readying to go on Saturday after Bangladesh earlier relocated around 3,500 people despite calls by rights groups not to carry out further moves, citing the risk of storms and floods lashing the site.

They are the newest addition to the roughly 3,500 Rohingya refugees from neighboring Myanmar that Bangladesh has sent to the island of Bhasan Char in the Bay of Bengal since early December from border camps where a million live in ramshackle huts.

"Today we are expecting 1,700-plus people to arrive here," Commodore Abdullah Al Mamun Chowdhury, the officer in charge of the island, told Reuters by telephone on Friday. More Rohingya who volunteered to shift to the island were being transferred to the nearest port city of Chittagong from the camps, he added.

"Tomorrow they will be moved to Bhasan Char. All together we are expecting 3,000-plus people," Chowdhury said. The island is several hours' journey away from the southern port.

The Rohingya, a minority group who fled violence in Buddhist-majority Myanmar, are not allowed to move off the island without permission from the government. Bangladesh says the relocation is voluntary, but some of the first group, sent in December, spoke of being coerced.

The island surfaced only 20 years ago and was not previously inhabited. It was regularly submerged by monsoon rains but now has flood protection embankments, houses, hospitals and mosques built by the Bangladesh Navy at a cost of more than $112 million. The island's facilities are designed to accommodate just a fraction of the million Rohingya Muslims who fled waves of violent persecution in their native Myanmar and are currently living in crowded, squalid refugee camps in Cox's Bazar district, whereas many as a dozen people share a single shelter and there is scarce access to soap and water in some areas.

The government says overcrowding in the Cox's Bazar district camps is fuelling crime, as efforts to return them to Myanmar flounder.

"What options do we have? How long can we live in the crowded camps under tarpaulins?" asked Mohammed Ibrahim, 25, en route to the island where some of his relatives have already been moved. "This is going nowhere, the way the international community is handling our crisis," he told Reuters by mobile telephone.

Dhaka has dismissed flood concerns over the island, citing that the government built a 12-kilometer (7.5-mile) embankment that is 2 meters (6.5 feet) high. In addition, housing for 100,000 people, hospitals and cyclone centers have been erected.

Bangladesh has drawn criticism for its reluctance to consult with aid bodies, including the United Nations High Commissioner for Refugees, over the transfers. The agency says it has not been allowed to evaluate the safety and sustainability of life on the island.

"We look forward to continuing a constructive dialogue with the government regarding its Bhasan Char project, including the proposed U.N. technical and protection assessments," it said in an email.

Bangladeshi authorities sent the first group of 1,642 Rohingya to the island on Dec. 4, despite calls for a halt by human rights groups. International aid agencies and the U.N. have opposed the relocation since it was first proposed in 2015, expressing fear that a big storm could overwhelm the island and endanger thousands of lives.

The United Nations wants the refugees to be allowed to make a "free and informed decision” about whether to relocate. Amnesty International and Human Rights Watch (HRW) have urged the government to cancel the plan. An influential Cabinet minister and general secretary of the governing party, Obaidul Quader, said that the Rohingya are being moved to the island because their repatriation to Myanmar has been delayed. He said refugees who were earlier taken to Bhashan Char have expressed satisfaction.

Bangladesh has attempted to start sending refugees back to Myanmar under a bilateral agreement, but no one was willing to go. The Rohingya are not recognized as citizens in Myanmar, rendering them stateless and face other state-sanctioned discrimination.

Bangladesh and Myanmar resumed negotiations, mediated by China, on the repatriation of the Rohingya on Jan. 19 after a year of silence. Dhaka called on Naypyitaw to create conditions in which refugees would agree to return. Both sides tentatively discussed a new attempt to begin repatriation in the second quarter of the new year, although it was not immediately clear what guarantees the Rohingya would receive regarding their safety and livelihoods as planned.

“Myanmar has made all necessary arrangements for the repatriation and reaffirmed Myanmar’s readiness to receive the verified displaced persons in line with the bilateral agreements,” Naypyidaw’s Ministry of Foreign Affairs said in a statement earlier in January.

About 750,000 Rohingya Muslims, mostly women and children, fled from Buddhist-majority Myanmar to Bangladesh after August 2017, when Naypyitaw's military began a harsh crackdown on the minority group following an attack by insurgents. Since Aug. 25, 2017, nearly 24,000 Rohingya Muslims have been killed by Myanmar’s state forces, according to a report by the Ontario International Development Agency (OIDA).

More than 34,000 Rohingya were thrown into fires, over 114,000 were beaten and 18,000 Rohingya women and girls were raped by the Myanmar army and police, according to OIDA's "Forced Rohingya Migration: An Ineffable Experience." The report also states that more than 115,000 Rohingya homes were burned down and another 113,000 were destroyed.