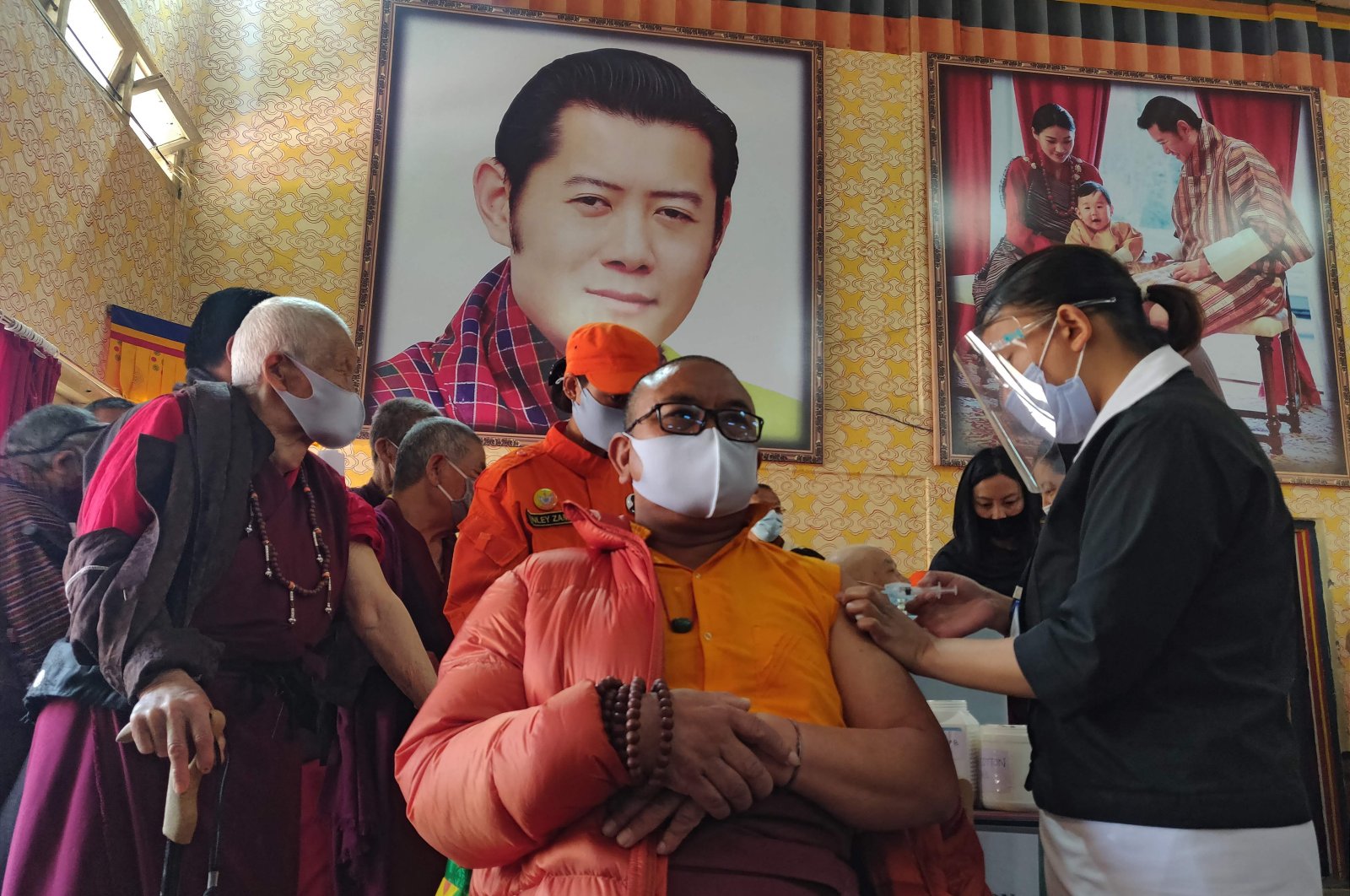 A health worker gives a dose of a COVID-19 vaccine to a Buddhist monk sitting in front of a portrait of Bhutan's King Jigme Khesar Namgyel Wangchuck, at Lungtenzampa Middle Secondary School in Thimphu, Bhutan, March 27, 2021. (AFP Photo)
by Associated Press Apr 12, 2021 11:02 am
RECOMMENDED

Countries around the globe have been racing to vaccinate their populations against COVID-19 but most inoculation campaigns have encountered plenty of obstacles along the way. Europe for instance has been in complete disarray, meanwhile, the small country of Bhutan has already vaccinated 93% of its adult population, overtaking the likes of Israel, the United States and Bahrain, known for their rapid vaccinations.

Those countries took months to reach where they are, painstakingly strengthening their vaccination campaigns in the face of rising coronavirus cases. However, the story of Bhutan's vaccination campaign is nearly finished, just 16 days after it began.

The tiny Himalayan kingdom wedged between India and China has vaccinated nearly 93% of its adult population since March 27. Overall, the country has vaccinated 62% of its 800,000 people. The rapid rollout of the vaccine puts the tiny nation just behind Seychelles, which has given jabs to 66% of its population of nearly 100,000 people.

Its small population helped Bhutan move fast, but its success has also been attributed to its dedicated citizen volunteers, known as "desuups,” and established cold chain storage used during earlier vaccination drives.

Bhutan received its first 150,000 doses of the AstraZeneca vaccine from neighboring India in January, but the shots were distributed beginning in late March to coincide with auspicious dates in Buddhist astrology.

The first dose was administered by and given to a woman born in the Year of the Monkey, accompanied by chants of Buddhist prayers. "Let this small step of mine today help us all prevail through this illness,” the recipient, 30-year-old Ninda Dema, was quoted by the country's Kuensel newspaper as saying.

Dr. Pandup Tshering, secretary to the Ministry of Health, said jabs were still being provided to those who could not get vaccinated during the campaign period and that the country had enough doses to cover its entire population, reported The Associated Press (AP).

Bhutan has recorded 910 infections with the coronavirus and one COVID-19 death so far. It has a mandatory 21-day quarantine for all people arriving in the country. All schools and educational institutions are open and are monitored for compliance with COVID-19 protocols, Tshering said.

Bhutan is the last remaining Buddhist kingdom in the Himalayas, but the country has transitioned from an absolute monarchy to a democratic, constitutional monarchy.