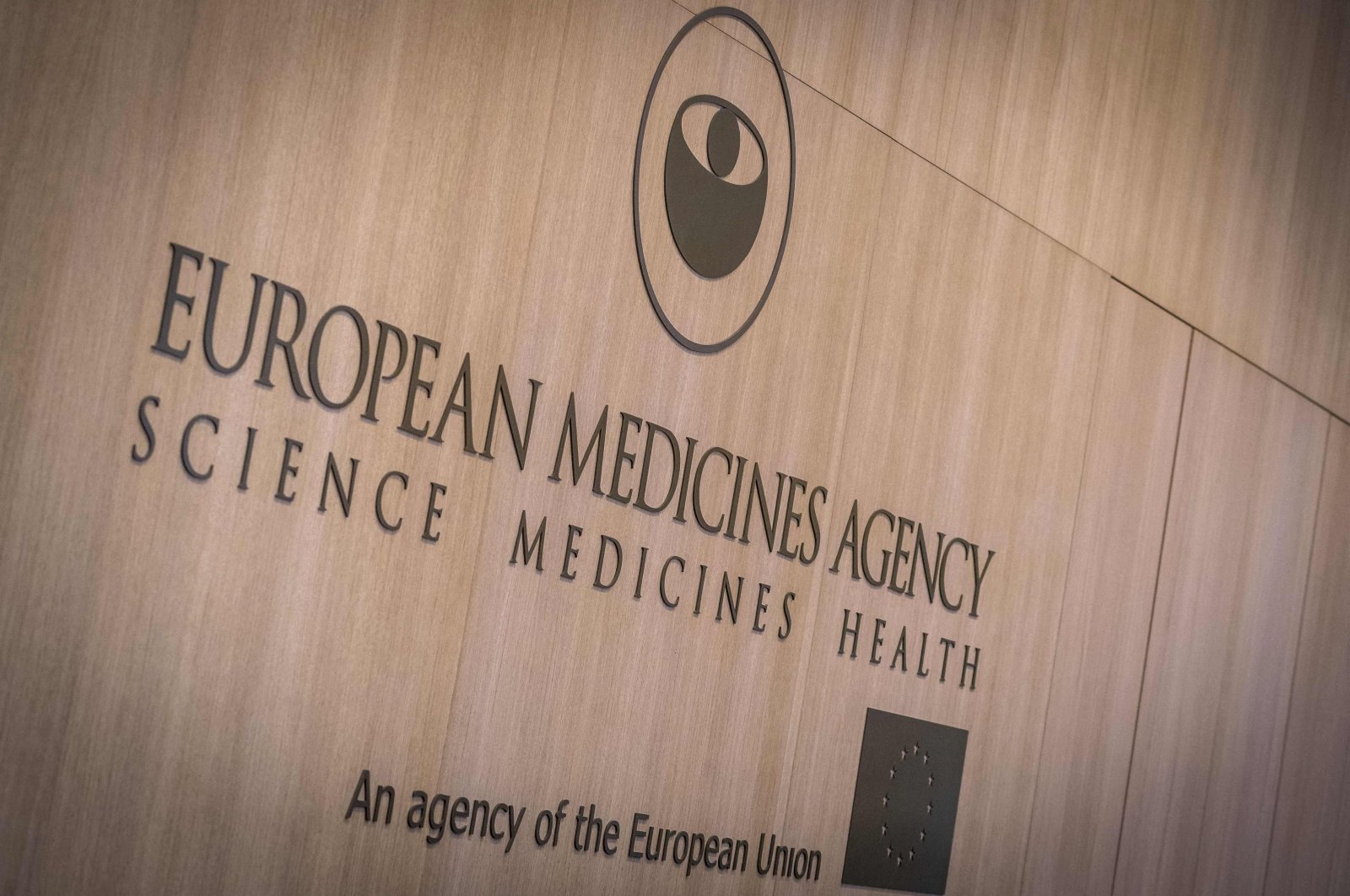 An inscription reads “European Medicines Agency” at the entrance of the new building at the EMA headquarters in Amsterdam, the Netherlands, Nov. 15, 2019. (AFP Photo)
by Associated Press Apr 07, 2021 2:29 pm
RECOMMENDED

As the investigation into AstraZeneca's COVID-19 vaccine and its links to rare blood clots came to an end, the European Union's medicines regulator announced Wednesday the conclusions they have reached, saying the review has found a "possible link” between the two but that the benefits of the shot still outweighed the risks.

In a statement released Wednesday, the European Medicines Agency (EMA) placed no new restrictions on using the vaccine in people 18 and over. The EMA said most of the cases reported have occurred in women under 60 within two weeks of vaccination.

The agency said based on the currently available evidence, it was not able to identify specific risk factors. Experts reviewed several dozen cases that came mainly from Europe and the United Kingdom, where around 25 million people have received the AstraZeneca vaccine.

"The reported cases of unusual blood clotting following vaccination with the AstraZeneca vaccine should be listed as possible side effects of the vaccine,” said Emer Cooke, the agency's executive director, as quoted by The Associated Press (AP).

"One plausible explanation for the combination of blood clots and low blood platelets is an immune response, leading to a condition similar to one seen sometimes in patients treated with heparin," the EMA said, according to Reuters.

Earlier this week, a senior official from the EMA said there was a causal link between the AstraZeneca vaccine and the rare clots that have been seen in dozens of people worldwide, among the tens of millions who have received at least one dose of the shot.

Marco Cavaleri, head of health threats and vaccine strategy at the Amsterdam-based agency, said in comments to Rome’s Il Messaggero newspaper on Tuesday that "it is becoming more and more difficult to affirm that there isn’t a cause-and-effect relationship between AstraZeneca vaccines and the very rare cases of blood clots associated with a low level of platelets.”

However, Cavaleri acknowledged the agency hadn't yet figured out how exactly the vaccine might be causing these rare side effects. The agency said its evaluation "has not yet reached a conclusion and the review is currently ongoing.”

The EMA is particularly focused on two types of rare blood clots, one that appears in multiple blood vessels and another that occurs in a vein that drains blood from the brain. It is also evaluating reports of people who had low levels of blood platelets, which puts them at risk of severe bleeding.

The EMA, the World Health Organization (WHO) and numerous other health authorities have said repeatedly that the AstraZeneca vaccine is safe and effective and that the protection it offers against COVID-19 outweighs the small risks of rare blood clots.

As recently as last week, the EMA said "there is no evidence that would support restricting the use of this vaccine in any population,” a response to several countries doing just that, though an expert said more brain clots were being reported than would be expected.

To date, most of the cases have been reported in younger women, who are more susceptible to developing such rare clots anyway, making understanding what is causing the clots potentially more difficult.

"The problem is these clots are very unusual, and we don't really know what the background rate of them is, so it's very hard to know if the vaccine is contributing to this,” said Dr. Peter English, who formerly chaired the British Medical Association's Public Health Medicine Committee.

A full investigation would likely take months, but English said given the urgency of the continuing pandemic, regulators would likely make a quick decision. "It's very likely we will see a suspension of the vaccine's use in certain groups while they do the further investigations to give us clearer answers," English said.

In March, more than a dozen countries, mostly in Europe, suspended their use of AstraZeneca over the blood clot issue. Most restarted, some with age restrictions, after the EMA said countries should continue using the potentially life-saving vaccine.

The suspensions were seen as particularly damaging for AstraZeneca because they came after repeated missteps in how the company reported data on the vaccine's effectiveness and concerns over how well its shot worked in older people.

That has led to frequently changing advice in some countries on who can take the vaccine, raising worries that AstraZeneca’s credibility could be permanently damaged, spurring more vaccine hesitancy and prolonging the pandemic.

English said the back-and-forth over the AstraZeneca vaccine globally could have serious consequences. "We can’t afford not to use this vaccine if we are going to end the pandemic,” he said.

That’s because the vaccine is cheaper and easier to store than many others, is critical to Europe’s immunization campaign and a pillar of the U.N.-backed program known as COVAX that aims to get vaccines to some of the world’s poorest countries. It has been endorsed for use in more than 50 countries, including by the 27-nation EU and WHO. U.S. authorities are still evaluating the vaccine.

The latest suspension of AstraZeneca came in Spain's Castilla y Leon region, where health chief Veronica Casado said Wednesday that "the principle of prudence” drove her to put a temporary hold on the vaccine that she still backed as being both effective and necessary.

"If there are in fact individuals of a certain age group that could have a higher risk (of clotting) then we need to adjust its use,” Casado told Spanish public radio. "We are not questioning AstraZeneca. We need all the vaccines possible to reach the goal of 70% of the adult population.”

French health authorities said they, too, were awaiting EMA’s conclusions and would follow the agency’s recommendations, especially for the 500,000 people who have received a first dose of AstraZeneca.

English, the former chair of the British drug regulator, said that even rare, serious side effects are seen with established vaccines and that policymakers often decide that bigger public health goals warrants their use, citing the polio vaccine as an example. For every million doses that are given of the oral polio vaccine, about one child is paralyzed from the live virus contained in the vaccine.

On Tuesday, AstraZeneca and Oxford University, which developed the vaccine, paused a study of the shot in children while the U.K. regulator evaluates the link between the shot and rare blood clots in adults.