Biden urged to evacuate Afghan translators to avoid past mistakes 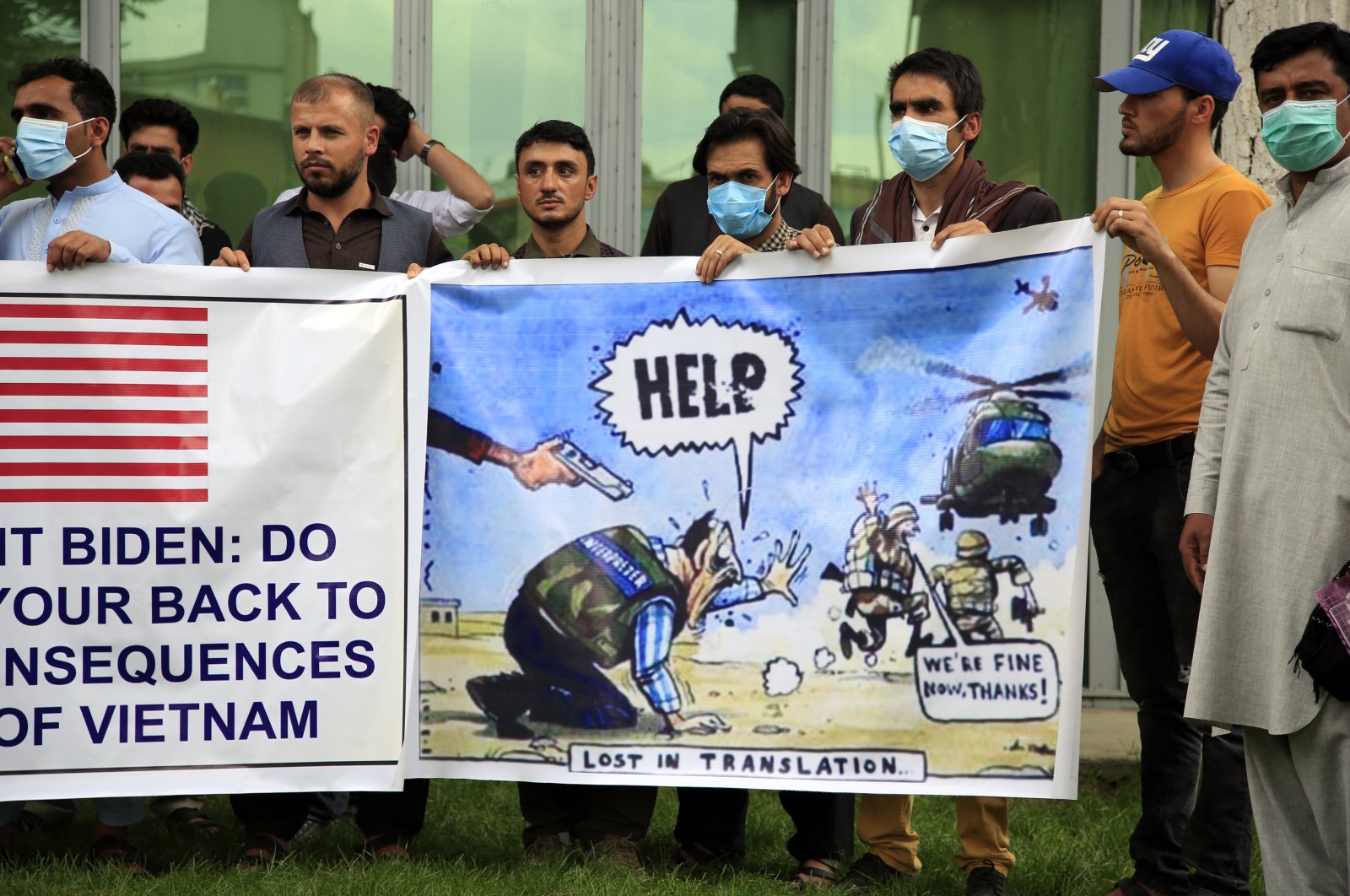 As thousands of Afghan translators who worked for foreign forces are left vulnerable to revenge attacks from the Taliban, U.S. lawmakers have urged the Biden administration to process thousands of visas to avoid former President Nixon's mistake in the Vietnam War

Following protests by Afghan translators desperate to escape from their war-torn country, calls for support are mounting in the United States, where lawmakers warned the White House of historic mistakes made by a previous administration.

In the chaotic final hours of the Vietnam War, the U.S. evacuated thousands of South Vietnamese who supported the American mission and were at risk under the communist government. With U.S. and NATO forces facing a Sept. 11 deadline to leave Afghanistan, many are recalling that hasty exodus as they urge the Biden administration to evacuate thousands of Afghans who worked as interpreters or otherwise helped U.S. military operations there in the past two decades.

Despite unusual bipartisan support in Congress, the administration hasn't agreed to such a move, declining to publicly support something that could undermine security in the country as it unwinds a war that started after the 9/11 attacks.

"We have a moral obligation to protect our brave allies who put their lives on the line for us, and we’ve been working for months to engage the administration and make sure there’s a plan, with few concrete results,” Republican Rep. Peter Meijer of Michigan said during a House hearing last week.

Lawmakers have urged the administration to consider temporarily relocating Afghans who worked for American or NATO forces to a safe overseas location while their U.S. visas are processed.

Some have suggested Guam, a U.S. territory that served a similar purpose after the Vietnam War. The Biden administration for now is focusing on accelerating a special visa program for Afghans who helped U.S. operations and is pouring resources into relieving the backlog.

"We are processing and getting people out at a record pace,” White House Press Secretary Jen Psaki said Wednesday. "We are working with Congress right now to streamline some of the requirements that slow this process down and we’re doing the kind of extensive planning for potential evacuation, should that become necessary.”

Members of Congress are expected to raise the issue Friday when Afghan President Ashraf Ghani comes to Washington to meet with Biden and lawmakers.

Zalmay Khalilzad, the State Department’s special representative for Afghanistan reconstruction, warned lawmakers in May that "the departure of all educated Afghans" would "signal panic" and hurt the morale of the country's security forces.

"This is a delicate, complicated balance that we have to keep," Khalilzad said.

Democratic Rep. Jason Crow of Colorado recently introduced legislation that would nearly double the number of visas available this year to 8,000 and ease eligibility requirements. But he said congressional action will not be quick enough or sufficient. Even if the legislation passed immediately, the number of visas would fall far short of the estimated 18,000 Afghans waiting to be processed. That figure does not include their spouses and children, who would bring the total to about 70,000 people. And the average wait is more than three years.

The process also has been hampered by the coronavirus pandemic, which led the U.S. Embassy in Afghanistan to suspend visa interviews. Crow, a former Army ranger who served in Afghanistan, said he prefers the government "evacuate our Afghan partners to a temporary evacuation site where we can safely conduct robust visa processing without threat to applicants’ safety by the Taliban.”

In a statement this month, the Taliban vowed not to attack those who worked for Western interests, urging Afghans to remain at home and warning their ranks against revenge killings. Still, many Afghans are desperate for a visa, fearing violence not only from the Taliban but heavily armed warlords allied with the U.S. and seeing now as their last chance to leave Afghanistan.

Independent Sen. Angus King of Maine said the government needs to find a "creative” approach to helping Afghans who worked with the U.S. military. That could include sending more people from the State Department or the military to process visas in Afghanistan or evacuating people to a safe place to be vetted.

"It’s not only a moral issue, it’s a national security issue,” said King, who sits on both the Intelligence and Armed Services committees, adding that, "We also have a practical responsibility, in terms of do we want people to help us in the future?”

More than 300 interpreters have been killed in Afghanistan since 2016, according to No One Left Behind, an organization that advocates on their behalf.

Former Army Maj. Matt Zeller said a military evacuation is the only viable option for thousands of Afghans facing threats who have been protected by the presence of U.S. troops.

"I’m only alive because my Afghan Muslim translator saved my life by killing two Taliban fighters who were about to kill me in a battle," said Zeller, whose interpreter waited three years for a visa.

The U.S. government should have learned from what happened in Vietnam, said Jim Jones, a Vietnam veteran and former Idaho Supreme Court chief justice. Initially fearing a mass evacuation would undermine the South Vietnamese military, the U.S. watched for weeks as the North Vietnamese Army overtook South Vietnam before starting to fly out Americans and allies.

The effort ended with the largest helicopter evacuation in history in the final hours of the war. In less than 24 hours, Marine helicopters airlifted about 7,000 U.S. military personnel, South Vietnamese who supported the American mission and their dependents.

Many South Vietnamese soldiers and government officials left behind were killed or held in "reeducation" camps. They included troops who had helped Jones stay alive as an Army artillery officer.

"We had a moral obligation to extract as many as possible but, instead, we abandoned them to a horrific fate,” Jones wrote in the Military Times. "We simply cannot allow that kind of tragedy to happen again with the Afghans. I pray that this great nation does not again turn its back on beleaguered people who placed their trust in us.”

Pentagon leaders told lawmakers Wednesday that they are prepared to carry out an evacuation if ordered, though they also have sought to downplay concerns that history will repeat itself.