Bodies exhumed from rented graves in Philippines as leases expire 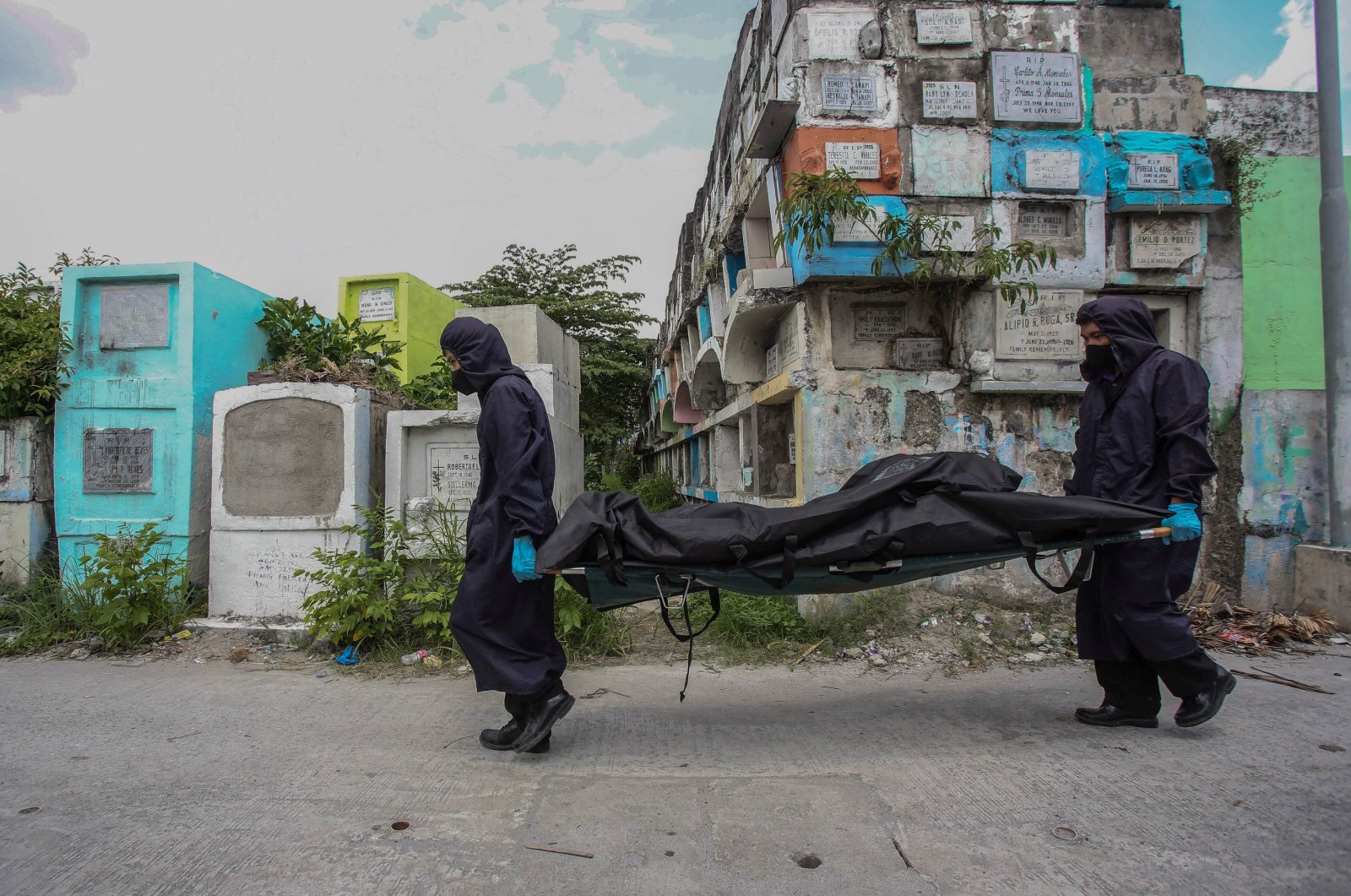 Workers wearing masks, gloves and protective coats carry a body bag containing the skeletal remains of Rodzon Enriquez, who was killed five years ago in the country's war on drugs, after they were exhumed at a cemetery in Manila, the Philippines, July 8, 2021. (AFP Photo)
by French Press Agency - AFP Jul 21, 2021 11:26 am
RECOMMENDED

Rodzon Enriquez is just one example of the human cost of the Philippines' war on drugs. Five years ago the 24-year was shot dead in his bed. Earlier this month, his skeletal remains were removed from a coffin-sized tomb in Manila and placed in a body bag because the lease on his grave is expiring.

Activists estimate tens of thousands of people have died since President Rodrigo Duterte ordered police to go after drug addicts and dealers in a widely condemned campaign that has largely targeted poor men.

Many of the dead were put in "apartment" tombs stacked meters high in jam-packed cemeteries across the sprawling capital, where a five-year lease on a rectangular concrete box costs about 5,000 pesos ($100).

As leases run out, a Catholic charity is helping families unable to afford the renewal fee to retrieve the bones of their loved ones with the aim of having them cremated and put in a permanent burial site.

"I don't want his remains thrown away," Corazon Enriquez, 63, told Agence France-Presse (AFP), after her son's bones were carried away on a stretcher by two men wearing masks, gloves and protective coats.

The mother of seven had welcomed Duterte's promise to rid the country of drugs.

"If you know of any addicts, go ahead and kill them yourself as getting their parents to do it would be too painful," Duterte told the public soon after he was sworn into office.

But Enriquez never imagined the campaign would target her own family.

Rodzon, a fishing port worker who used methamphetamine to stay awake during overnight shifts, was shot dead by police in his bed weeks after Duterte took power, she said.

"I wanted to have him at home – even if his physical body is no longer here, I know he's still there," said Enriquez of the ashes she plans to keep until another location is found.

"I still feel the pain – I would have wanted to swap places with my son."

Father Flavie Villanueva, a vocal critic of Duterte, is spearheading the exhumation effort. He said thousands of cremations could be needed in the coming years as leases expire.

Villanueva hopes to eventually store the ashes in a columbarium to give victims a "dignified" final resting place – and help families find closure.

"It's already too much that you lose a loved one – should you also lose his remains?" said the priest, who is raising money to finance the ambitious plan.

It is too late for some families. The bones of their relatives were removed and thrown into sacks with the remains of others before the tomb leases expired, Villanueva said.

"They're human beings... they deserve better," he added.

'Your papa is here'

On a single day this month, Villanueva oversaw the exhumations of seven drug war dead, as weeping widows and mothers looked on.

Many of the people killed were breadwinners for their families, who now struggle to put food on the table, he said. Extending the leases was beyond their means.

"If you couldn't have anything to feed your children, how could I even worry for the dead if the living in front of me are dying," Villanueva said.

He had gone out to do an extra shift as a tricycle driver to pay for a special meal to share with her and their 11 children. Fuellas was told later that Reynaldo had been on a narcotics "watchlist."

"I'm glad I will be able to bring him home," she said after watching the removal of his remains.

"I can tell my children 'your papa is here.'"

International Criminal Court prosecutors have requested a full-blown investigation into the drug war.

They want to probe allegations that police unlawfully killed as many as tens of thousands of civilians between 2016 and 2019 – overlapping the first three years of Duterte's term.

Duterte, who is barred from seeking reelection next year, has called the ICC "bullshit" and vowed not to cooperate.

Felicitas Narvarte, whose son Edward was shot dead outside a shop two weeks before Duterte was sworn into office, blames the president for his death.

Hours after sharing a takeaway roast chicken at their home, Narvarte said she heard gunshots followed by her son's voice calling out "mum, mum!"

"Only when the person who ordered the killing of drug addicts is jailed will my feelings get better," the 62-year-old told AFP, after placing candles and food in front of her son's tomb to mark the anniversary of his death.

She plans to move his remains to a smaller box that is cheaper and where her grandson – Edward's child – can visit.

But she is running out of time to find the money before the final extension given by the cemetery caretaker expires.

"I wanted it to be in a good place, I don't want it to be merged with other bones," she said.

"He was my sweetest child."