Canadian man sentenced to 11 years on espionage charges in China 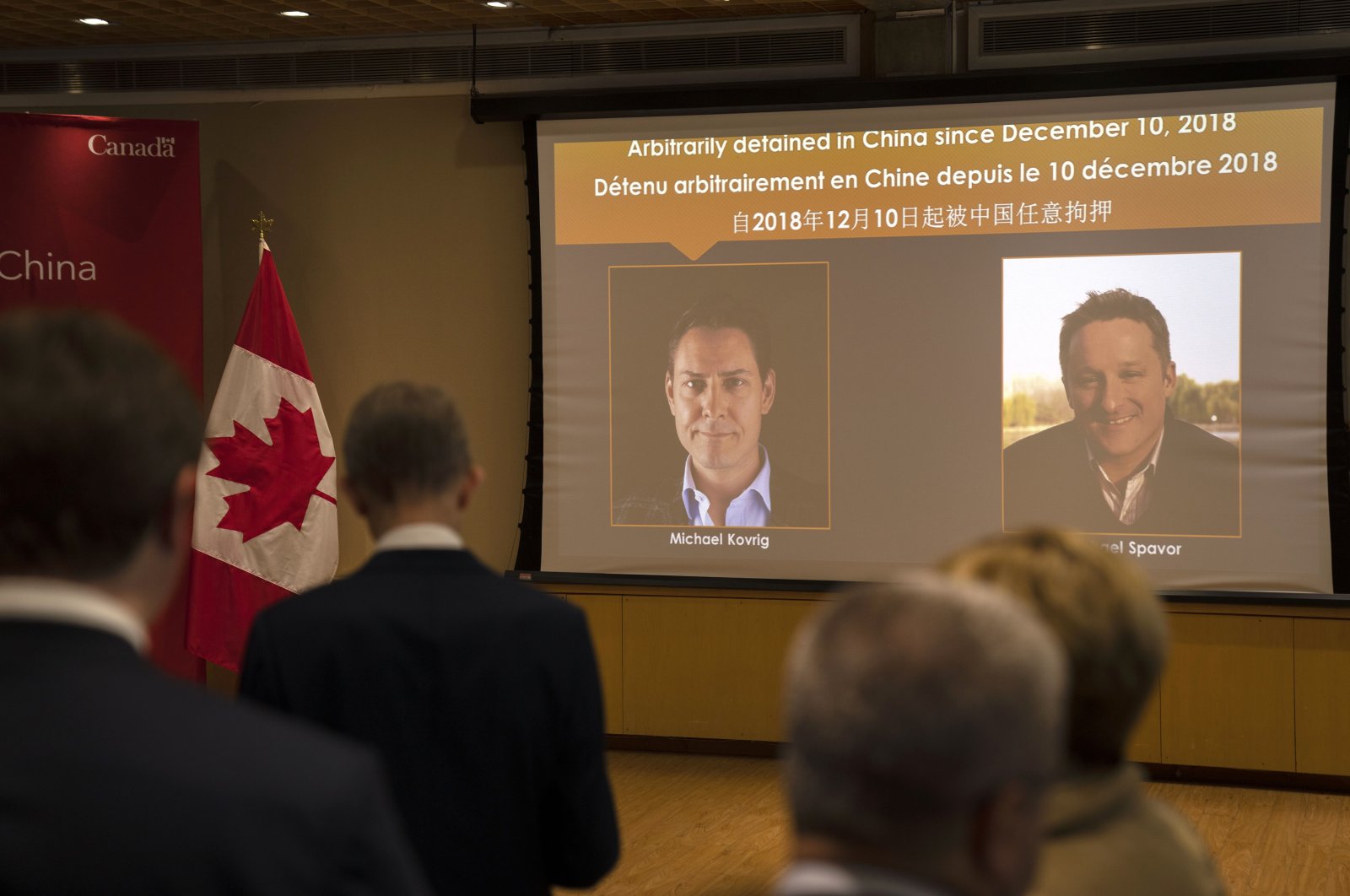 A video screen displays images of Canadians Michael Kovrig,(L), and Michael Spavor at an event held in connection with the announcement of the sentence for Spavor at the Canadian Embassy in Beijing, China, Aug. 11, 2021. (AP Photo)
by REUTERS Aug 11, 2021 8:20 am
RECOMMENDED

A Chinese court convicted Canadian businessperson Michael Spavor of espionage on Wednesday and sentenced him to 11 years in prison, in a case that is embroiled in a wider diplomatic spat involving Washington and Beijing.

His sentencing comes as lawyers in Canada representing the chief financial officer of Chinese telecoms giant Huawei make a final push to convince a court there not to extradite her to the United States.

"We condemn in the strongest possible terms this decision after a legal process that lacked both fairness and transparency," said Canada's ambassador to China, Dominic Barton, who was at the detention center in northeastern China where the verdict was delivered. In a video address to diplomats and journalists gathered at the Canadian Embassy in Beijing, Barton called for the release of Spavor and fellow Canadian Michael Kovrig, who is also awaiting a verdict in an espionage case.

Barton, who visited with Spavor following the verdict, said Spavor had three messages that he asked to be shared with the outside world: "Thank you for all your support", "I am in good spirits," and "I want to get home."

The Dandong Intermediate Court also said 50,000 yuan of Spavor's personal assets. He will be deported on completion of his sentence, Barton said. The potential sentence ranged from five to 20 years. China detained Spavor in December 2018, days after Canada arrested Huawei executive Meng Wanzhou at Vancouver International Airport on a warrant from the United States. He was charged with espionage in June 2019. The Dandong court concluded a one-day trial in March and waited till Wednesday to announce the verdict.

Spavor's family said in March the charges against him are vague and have not been made public, and that he has had "very limited access and interaction with his retained Chinese defense counsel.” Kovrig, a former diplomat, was also detained in China in late 2018 days after Meng's arrest and charged with espionage. His trial concluded in March with the verdict to be announced at an unspecified date.

Some observers have said convictions of the two Canadians could ultimately facilitate an agreement in which they are released and sent back to Canada. China has a conviction rate of well over 99%, and public and media access to trials in sensitive cases is typically limited.

Since Meng's arrest, China has sentenced four Canadians to death over drug charges. They are Robert Schellenberg, Fan Wei, Ye Jianhui and Xu Weihong. China has rejected the suggestion that the cases of the Canadians in China are linked to Meng's case in Canada though Beijing has warned of unspecified consequences unless Meng was released.

Meng was charged with misleading HSBC Holdings PLC about Huawei's business dealings in Iran, potentially causing the bank to violate American economic sanctions against Tehran. Meng, who has said she is innocent, has been fighting her extradition from under house arrest in Vancouver. Her extradition hearings in Canada are currently in their last few weeks ahead of a ruling from the judge, expected sometime in the next few months, before Canada’s justice minister makes a final decision on whether to extradite her.