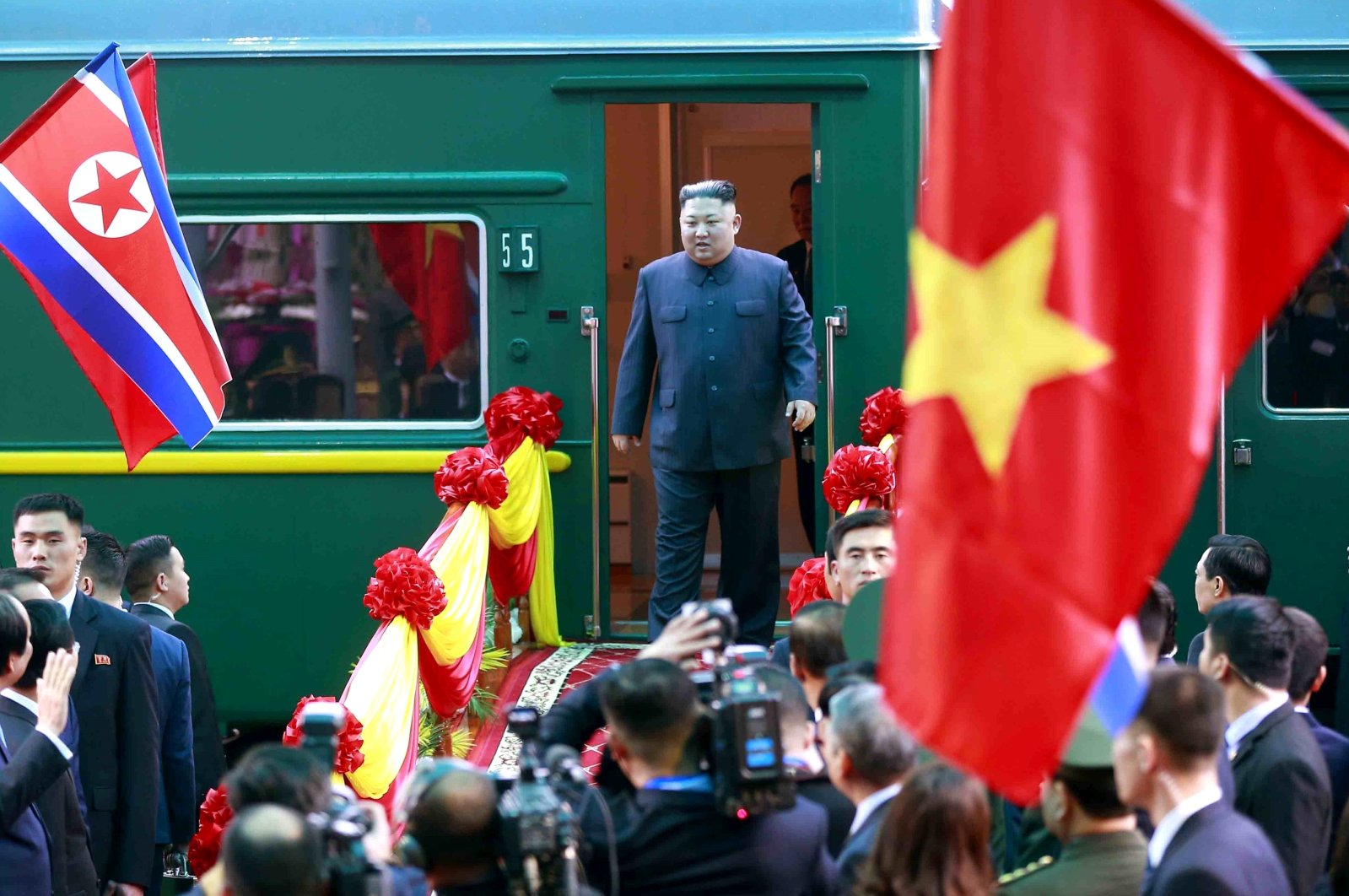 North Korean leader Kim Jong-un (C) steps off the train to be welcomed at Dong Dang Railway Station, to start his visit to Vietnam ahead of the US-North Korea summit hosted in Hanoi, at Dong Dang town, Lang Son province, Vietnam, Feb. 26, 2019. (EPA-EFE Photo)
by REUTERS Nov 02, 2021 9:59 am
RECOMMENDED

China and Russia are pushing the United Nations Security Council (UNSC) to ease sanctions on North Korea by reviving a 2019 attempt to remove a ban on Pyongyang's exports of statues, seafood and textiles and expanding it to include lifting a refined petroleum imports cap.

In a reworked draft resolution, seen by Reuters on Monday, China and Russia want the 15-member council to remove those sanctions "with the intent of enhancing the livelihood of the civilian population" in the isolated Asian state.

North Korea has been subject to U.N. sanctions since 2006 over its nuclear and ballistic missile programs. The draft resolution also includes other measures first proposed by Russia and China nearly two years ago, including lifting a ban on North Koreans working abroad and exempting inter-Korean rail and road cooperation projects from sanctions.

A resolution needs nine votes in favor and no vetoes by the United States, France, Britain, Russia or China to pass. The U.N. missions of Russia and China did not immediately respond to a request for comment on the new text, which diplomats said was circulated to council members on Friday.

"It has been always China's will that we should also address the humanitarian dimension caused by the sanctions imposed by the Security Council," China's U.N. Ambassador Zhang Jun told reporters last month, adding again that the 2019 draft resolution "remains on the table."

A spokesperson for the U.S. mission to the United Nations declined to comment on private council discussions, but added that all U.N. members should be focused on addressing those who are violating the sanctions already in place.

"The Security Council has repeatedly affirmed that it is prepared to modify, suspend, or lift the measures as may be needed in light of the DPRK's compliance," the spokesperson said. "Yet the DPRK has taken no steps to comply with the Security Council's demands regarding its prohibited nuclear and ballistic missile programs."

North Korea is formally known as the Democratic People's Republic of Korea. The UNSC does already allow for humanitarian exemptions. A U.N. rights investigator last month called for sanctions to be eased as North Korea's most vulnerable risk starvation after it slipped deeper into isolation during the COVID-19 pandemic.

The sanctions on industries that Russia and China have proposed lifting previously earned North Korea hundreds of millions of dollars. They were put in place in 2016 and 2017 to try to cut off funding for Pyongyang's nuclear and missile programs. North Korea continued developing its nuclear and ballistic missile programs during the first half of 2021 in violation of U.N. sanctions and despite the country's worsening economic situation, U.N. sanctions monitors reported in August.

The country has long suffered from food insecurity, with observers saying that mismanagement of the economy is exacerbated by sanctions and now the COVID-19 pandemic, which prompted unprecedented border lockdowns there. The new draft resolution would have the council acknowledge "the difficult situation of economy and livelihood of the DPRK in recent years, underscoring the necessity to respect the legitimate security concerns of the DPRK, and ensure the welfare, inherent dignity, and rights of people in the DPRK."