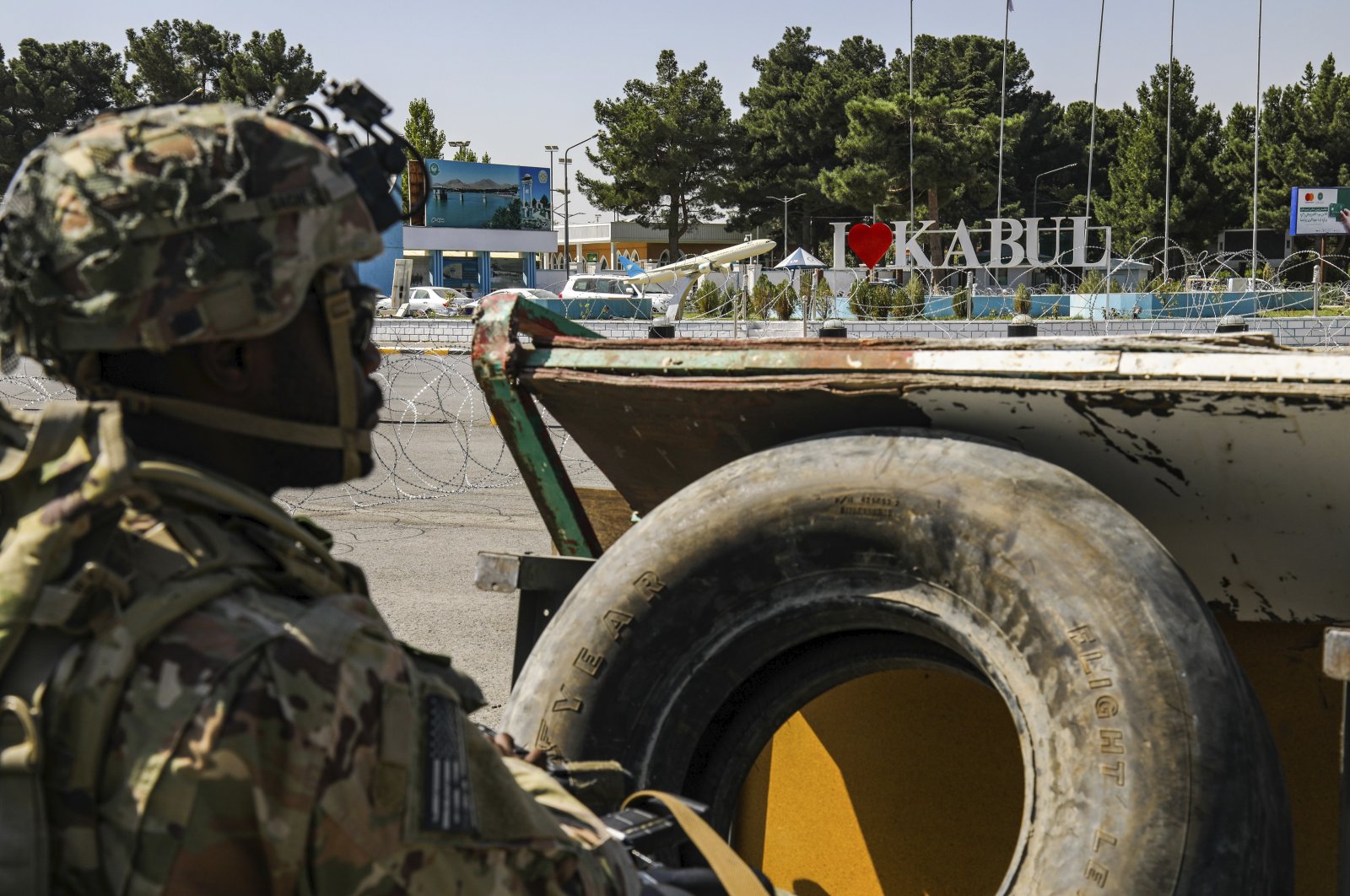 The United States and allies urged the hoards of people teeming at Kabul Hamid Karzai International Airport for over a week to stay away from the hotspot due to a credible threat of a terrorist attack by Daesh militants, as Western troops rush to evacuate as many citizens as possible before the marked Aug. 31 deadline

Western countries warned their citizens of a potential terrorist attack on Kabul Hamid Karzai International Airport, urging them to avoid the area and its surroundings as thousands of people try to board evacuation flights after the Taliban took control.

Britain said an attack could come within hours. Several countries urged people to avoid the airport, with Belgium saying there was a threat of a suicide bombing. But with just days left before the end of the evacuation effort and withdrawal of American troops, few appeared to heed the call.

Over the last week, the airport has been the scene of some of the most searing images of the chaotic end of America's longest war and the Taliban's takeover, as flight after flight landed to pull out those who fear a return to the militants' brutal rule. Already, some countries have ended their evacuations and begun to withdraw their soldiers and diplomats, likely signaling the beginning of the end of one of history's largest airlifts.

The Taliban have so far honored a pledge not to attack Western forces during the evacuation, but insist the foreign troops must be out by America's self-imposed deadline of Aug. 31. But overnight, new warnings emerged from Western capitals about a threat from the Daesh terrorist group.

British Armed Forces Minister James Heappey told the BBC on Thursday there was ”very, very credible reporting of an imminent attack” at the airport, possibly within "hours.” Heappey conceded that people are desperate to leave and "there is an appetite by many in the queue to take their chances, but the reporting of this threat is very credible indeed and there is a real imminence to it.”

"There is every chance that as further reporting comes in, we may be able to change the advice again and process people anew, but there’s no guarantee of that,” he added.

Late Wednesday, the U.S. Embassy warned citizens at three airport gates to leave immediately due to an unspecified security threat. Australia, Britain and New Zealand also advised their citizens Thursday not to go to the airport, with Australia's foreign minister saying there was a "very high threat of a terrorist attack.” Taliban spokesperson Zabihullah Mujahid denied that any attack was imminent.

"It’s not correct,” he wrote in a text message after being asked about the warnings. He did not elaborate.

Nearly 90,000 Afghans and foreigners have fled Afghanistan via the U.S.-led airlift since the Taliban militants took control of the country on Aug. 15. Huge crowds are gathered in and around the airport, becoming increasingly desperate as some foreign nations cease flights ahead of Tuesday's deadline by U.S. President Joe Biden to end the evacuations and withdraw the U.S. troops overseeing it.

One reason for the hard deadline cited by Biden and his aides this week was an "acute" terrorist threat from the regional chapter of the Daesh terrorist group.

Australia's Department of Foreign Affairs said there was an "ongoing and very high threat of terrorist attack."

"Do not travel to Kabul Hamid Karzai International Airport. If you're in the area of the airport, move to a safe location and await further advice."

London issued a similar warning, adding "if you can leave Afghanistan safely by other means, you should do so immediately."

Daesh's Afghanistan-Pakistan chapter has been responsible for some of the deadliest attacks in those countries in recent years. It has massacred civilians in both countries, at mosques, shrines, public squares and even hospitals. The group has especially targeted Muslims from sects it considers heretical, including Shiites. Daesh and the Taliban are rivals and oppose each other.

While Western troops in the airport worked feverishly to move the evacuation as fast as possible, Taliban fighters guarded the perimeter outside, thronged by thousands of people trying to flee rather than stay in a Taliban-ruled Afghanistan.

Ahmedullah Rafiqzai, an Afghan civil aviation official working at the airport, said people continued to crowd around the gates despite the attack warnings.

"It's very easy for a suicide bomber to attack the corridors filled with people and warnings have been issued repeatedly," he told Reuters.

"But people don't want to move, it's their determination to leave this country that they are not scared to even die, everyone is risking their lives."

A NATO country diplomat in the Afghan capital said that although the Taliban were responsible for security outside the airport, threats from Daesh could not be ignored.

"Western forces, under no circumstances, want to be in a position to launch an offensive or a defensive attack against anyone in Afghanistan," the diplomat added. "Our mandate is to ensure evacuations end on Aug. 31."

Another Western official said flight operations had slowed on Wednesday but the pace of evacuations would hasten on Thursday. Taliban guards continue to protect civilians outside the airport, an official of the militant group said.

"Our guards are also risking their lives at Kabul airport, they face a threat too from Daesh," said the official, who spoke on condition of anonymity.

The Taliban have promised a softer brand of rule from their first stint, which ended in 2001 when the United States invaded because they gave sanctuary to al-Qaida. But many Afghans fear a repeat of the Taliban's perverted interpretation of Shariah law, as well as a violent retribution for working with foreign militaries, Western missions, or the previous U.S.-backed government.

There are particular concerns for women, who were largely banned from education and employment and could only leave the house with a male chaperone during the group's 1996-2001 rule.

"They have not only saved our lives, but they have also saved our dreams," one member of a girls robotics team said of the Mexican government after fleeing Afghanistan and landing in Mexico City. "Under this (Taliban) regime, we women will face difficulties ... that is why we are grateful to be here," she told reporters.

The crowds at the airport have led to chaos throughout the airlift operations, with thousands of U.S. troops trying to maintain a secure perimeter for evacuation flights. Some of the Afghans massed outside the airport have foreign passports, visas or eligibility to travel, but most do not. At least eight people have died in the chaos.

Despite the harrowing scenes, the Taliban have ruled out any extension to next Tuesday's deadline to pull out foreign troops, describing it as "a red line."

"They have planes, they have the airport, they should get their citizens and contractors out of here," said Mujahid.

Turkey, which had more than 500 noncombatant troops stationed in Afghanistan, said Wednesday it had started pulling out its forces.

Turkish officials said that the Taliban have asked Turkey for technical help to run the Kabul airport after the departure of foreign forces but insist that Ankara's military also withdraw fully by the end of August deadline.

Belgium said Wednesday it was ending evacuations after its military planes airlifted around 1,100 people – including Europeans and Afghans – in recent days.

France has said it will end its flights Thursday.

The Pentagon, which is managing all Kabul airport operations, has said it has to wind down evacuations several days before Aug. 31.

This is to allow time for the U.S. military to remove its own 6,000-plus troops, plus hundreds of U.S. officials and Afghan security forces, as well as equipment.