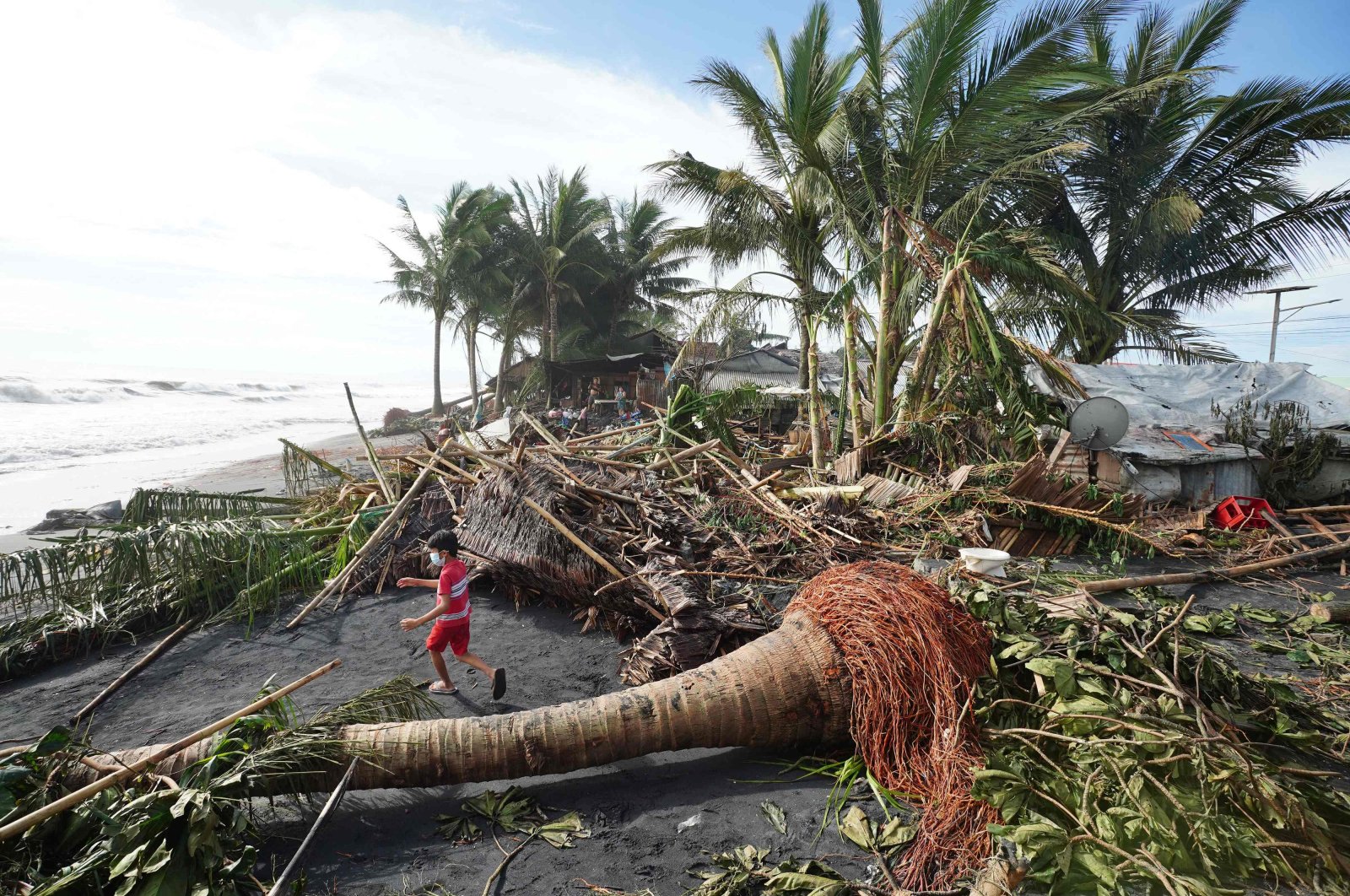 A child plays next to uprooted coconut and banana trees in the coastal town of Dulag in Leyte province a day after Super Typhoon Rai hit, Philippines, Dec. 17, 2021. (AFP Photo)
by Agencies Dec 17, 2021 10:43 am
RECOMMENDED

The feared death toll from the strongest typhoon to hit the Philippines this year has risen to 31, officials said on Saturday, nearly triple the previous day's number as rescue teams reach damaged areas and communication lines are restored.

Four people have been confirmed dead after being hit by falling trees and another 27 people are feared to have died as a result of Typhoon Rai, the country's disaster agency said in a statement.

The latest figures come after a disaster official in the central province of Negros Occidental confirmed 13 people had died, most by drowning, and that another 50 were missing in a flood-hit area.

"We started urging people to evacuate as early as Wednesday, but many were reluctant to leave," Salvador Mesa told Agence France-Presse (AFP).

Typhoon Rai slightly weakened after blowing ashore Thursday on the country’s southeastern coast but remained destructive with sustained winds of 155 kph (96 mph) and gusts of up to 215 kph as it barreled westward toward Palawan province before exiting into the South China Sea, meteorologists said.

Officials were assessing the extent of the damage and casualties wrought by one of the strongest typhoons to hit the country in recent years but said efforts were hampered by widespread power outages, downed communications and roads clogged with fallen trees and debris. Witnesses described ferocious winds that ripped off roofs and forced down trees, while others experienced severe flooding that trapped residents on their roofs.

Dinagat Islands' Governor, Arlene Bag-ao, managed to post a statement on the province's website to say that the island of about 180,000 "has been leveled to the ground."

She pleaded for food, water, temporary shelters, fuel, hygiene kits and medical supplies. She said only a few casualties have been reported in the capital so far because other towns remain isolated.

"We may have survived, but we cannot do the same in the coming days because of our limited capacities as an island province," Bag-ao said, adding some of Dinagat's hospitals could not open due to damage.

"Most of our commercial and cargo vessels ... are now unsuitable for sea voyages, effectively cutting us off from the rest of the country," she added.

Vice Gov. Nilo Demerey managed to reach a nearby province and told DZMM radio network that at least six residents died and that "almost 95% of houses in Dinagat have no roof," and even emergency shelters were destroyed.

"We're currently doing repairs because even our evacuation centers were destroyed. There are no shelters, the churches, gymnasium, schools, public markets and even the capitol were all shattered," Demerey said.

Some 309,000 people remain in evacuation centers, data from the disaster agency showed. Many areas are still without power, and corn and rice plantations have been flooded, said Iloilo Governor Arthur Defensor.

In central Bohol province, which was directly hit by the typhoon, the coast guard said its personnel onboard rubber boats rescued residents who were trapped on roofs and in trees, as waters rose rapidly. It released footage showing coast guard staff helping people from the roof of a house nearly engulfed by brownish floodwater to a rubber boat. They also helped a villager climb down from a tree above the floodwater while another man, also wearing an orange life vest, waited for his turn.

With government contingency funds used for the coronavirus pandemic, President Rodrigo Duterte said he would look for money to help the provinces. He planned to visit the devastated region this weekend.

"I have never experienced such ferocity of the wind in my life and we were not even directly hit,” Mayor Jerry Trenas of central Iloilo city told The Associated Press (AP) by telephone, adding that at least one resident was killed when she was hit by a cluster of bamboo blown down by the storm.

"Many houses were destroyed and we are still checking if there are other casualties," he said in a television interview, according to Deutsche Presse-Agentur (dpa). "There is no electricity as many poles were also toppled."

Workers were clearing roads in the coastal city of nearly half a million people, which remained without power and struggled with erratic cellphone signals, he said.

In central Bohol province, which was directly hit by the typhoon, Governor Arthur Yap said many residents remained trapped on their roofs by floodwater for a second day in the riverside town of Loboc, where his own house was swamped by water up to the second floor. Yap pleaded for volunteers from other regions to help save residents, saying he and other officials were struggling to find a way to deploy rescue boats to Loboc.

"Hundreds of families are trapped on the rooftops right now,” Yap told DZBB radio, adding that residents were exposed to rain and wind overnight. "We need first responders. What’s important now is to save lives.”

It was unclear what happened in other towns in the hard-hit province, which still had no electricity, Yap said.

Coast guard personnel rescued residents trapped in chest-deep waters on Thursday in a southern province, where torrential rains swamped villages in brownish water. In southern Cagayan de Oro city, footage showed two rescuers struggling to keep a month-old baby inside a laundry basin above the water and shield it from the wind and rain with an umbrella.

Presidential spokesperson Karlo Nograles said more than 332,000 people were evacuated from high-risk villages as the typhoon approached from the Pacific Ocean, including nearly 15,000 who were brought to evacuation centers. Crowding in those centers complicated efforts to keep people safely distanced after authorities detected the country’s first infections caused by the omicron variant of the coronavirus. Vaccination campaigns were also halted in provinces lashed by the typhoon.

The coast guard grounded all vessels in dozens of ports affected by stormy weather, stranding more than 4,500 passengers and ferry and cargo ship workers. An international airport in central Cebu province was closed and several mostly domestic flights were canceled while schools and workplaces were shut in the most vulnerable areas, Nograles said.

Photos on social media showed twisted metal sheets, broken glass windows, splintered wood and other debris strewn on roads. In some photos, brown flood waters submerged entire communities, with only rooftops visible. At least 62 cities and towns either lost power entirely or were experiencing disruptions in their electricity services.

About 20 storms and typhoons batter the Philippines each year. The archipelago is located in the seismically active Pacific "Ring of Fire” region, making it one of the world’s most disaster-prone countries. The strongest typhoon ever to hit the Philippines was Typhoon Haiyan, which killed more than 6,300 people and displaced more than 4 million in November 2013.