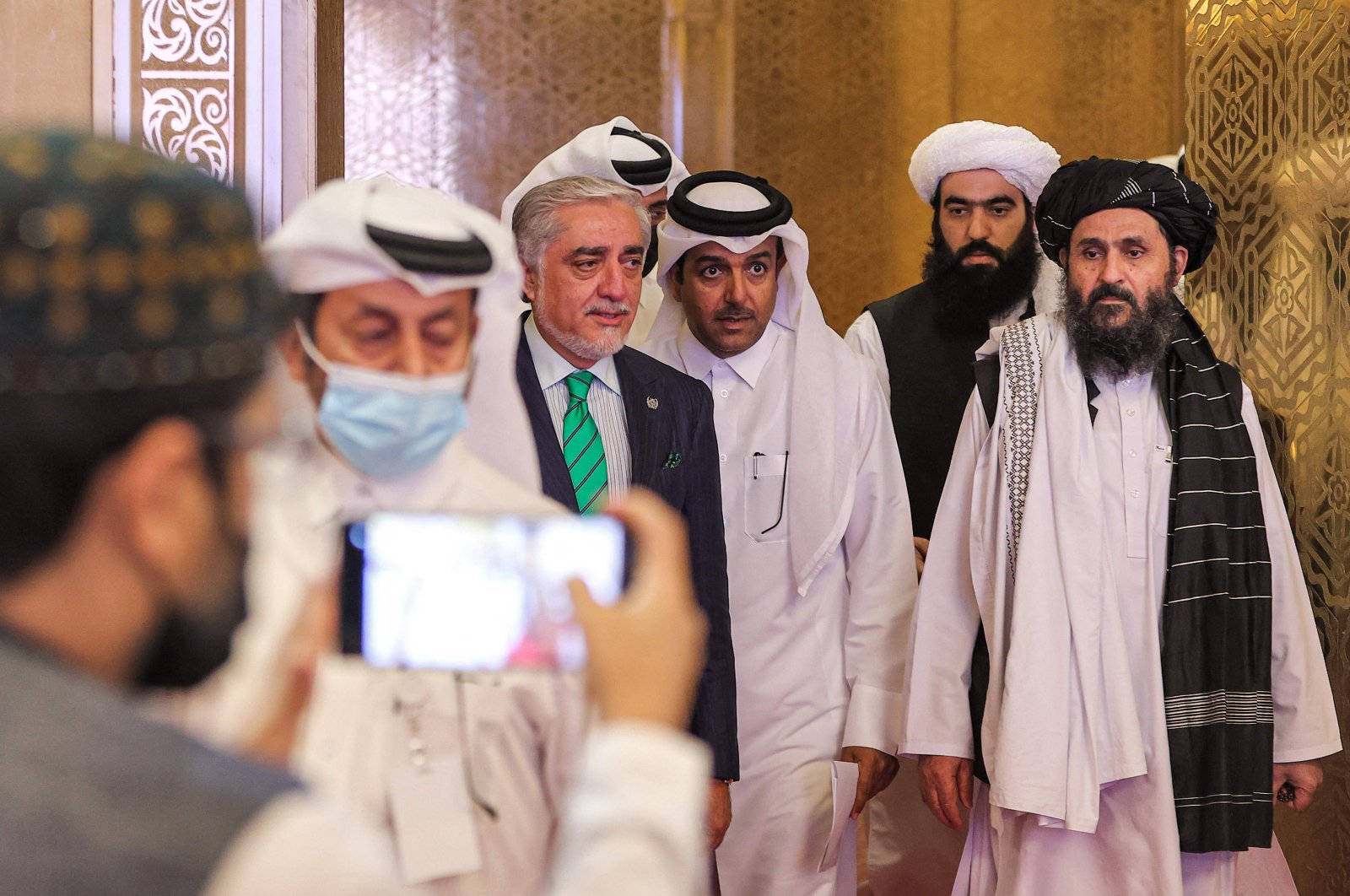 A man uses his phone to take a picture of (L to R) the head of Afghanistan's High Council for National Reconciliation Abdullah Abdullah, Qatar's envoy on counter-terrorism Mutlaq al-Qahtani, and the leader of the Taliban negotiating team Mullah Abdul Ghani Baradar as they arrive to present the final declaration of the peace talks between the Afghan government and the Taliban in Qatar's capital Doha on July 18, 2021. (AFP File Photo)
by Daily Sabah with AFP Jul 19, 2021 9:11 am
RECOMMENDED

Over a dozen diplomatic missions in Afghanistan called for an urgent halt to the Taliban's ruthless military offensive, saying that the group contradicts its statements on wanting a negotiated settlement to end the conflict.

The statement – signed by the U.S., EU, and more than a dozen other missions in Kabul – follows another round of inconclusive talks in Qatar over the weekend between the Afghan government and the Taliban, that many had hoped would kickstart the ailing peace process.

"The Taliban's offensive is in direct contradiction to their claim to support a negotiated settlement," it read.

"It has resulted in loss of innocent Afghan lives, including through continued targeted killings, displacement of the civilian population, looting and burning of buildings, destruction of vital infrastructure, and damage to communication networks."

For months, the two sides have been meeting on and off in the Qatari capital, but have achieved little, if any, notable success, with the discussions appearing to have lost momentum as the militants made enormous battlefield gains.

The sides released a joint statement late Sunday that said little more than they had agreed on the need to reach a "just solution," and to meet again "next week."

As the talks were underway, the Taliban's supreme leader Hibatullah Akhundzada released his own statement saying he "strenuously favours" a political settlement – even as the hardline Islamist movement continues its sweeping offensive across the nation.

Despite coming days ahead of the Eid al-Adha holiday, the Taliban leader's statement notably made no mention of a formal call for a cease-fire.

Over the years the Taliban has announced a series of short truces during Islamic holidays, initially spurring hopes for a larger reduction of violence.

However, the group has been criticized for using the temporary cease-fires to resupply and reinforce their fighters, allowing them to launch devastating onslaughts on Afghanistan's security forces once the truce expires.

With foreign forces in the last stages of a troop withdrawal due to being complete by the end of August, the Taliban have cut a huge swath across the country, capturing hundreds of districts, seizing key border crossings and encircling provincial capitals.

Afghanistan's southern border has long been a flashpoint in relations with its eastern neighbor. Pakistan's Balochistan province has been home to the Taliban's top leadership for decades, along with a large contingent of reserve fighters who regularly enter Afghanistan to bolster their ranks.

Foreign troops have been in Afghanistan for nearly two decades following the U.S.-led invasion launched in the aftermath of the Sept. 11 terrorist attacks. They have appeared largely out of the picture in recent months, but fears are growing that Afghan forces will be overwhelmed without the vital air support they provide.

The speed and scale of the Taliban onslaught have caught many by surprise, with analysts saying it appears aimed at forcing the government to negotiate on the insurgents' terms or suffer complete military defeat.