Evacuations from Afghanistan speed up as Taliban promise peace 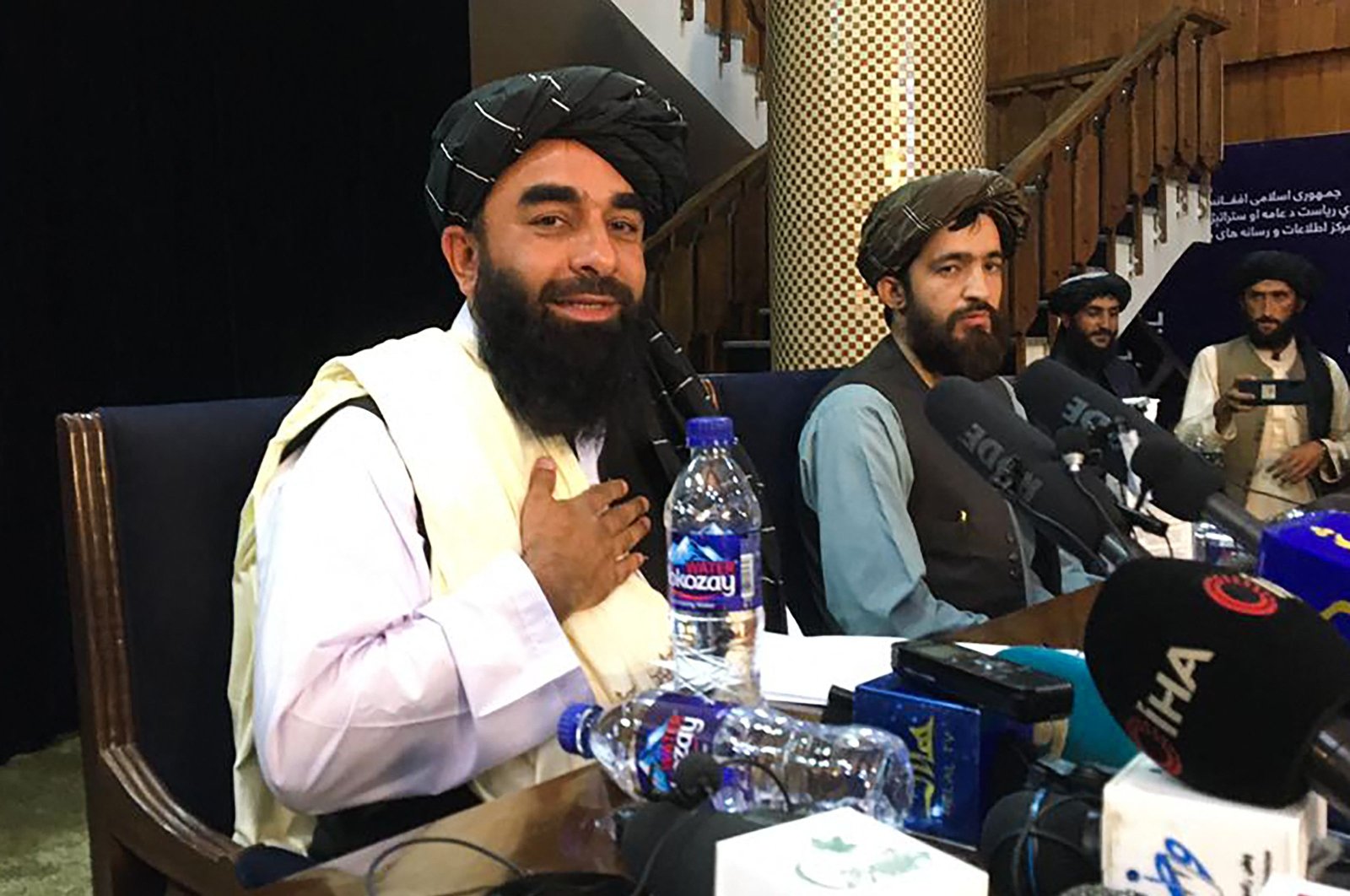 The Taliban ban its fighters from any celebration of the country's takeover, pledging no revenge against opponents and "no shadow of secrecy" as thousands flock to the airport to leave Afghanistan despite militants' promises

Planes carrying hundreds of evacuees from Kabul kept arriving in Western countries as governments stepped up evacuation efforts and the Taliban pledged women's rights, media freedom and amnesty to government officials in Afghanistan.

A British Air Force plane carrying British citizens and embassy staff touched down at an air base in Oxfordshire, United Kingdom, while a German government-chartered Lufthansa flight carrying 130 evacuees landed in Frankfurt, Germany. The United States said its military flights have so far evacuated 3,200 people from Kabul, including 1,100 on Tuesday alone. More than 2,200 diplomats and other civilians have been evacuated from Afghanistan on military flights, a Western security official told Reuters Wednesday.

In Kabul, the Taliban sought to strike a conciliatory tone at their first press conference since their lightning seizure of the Afghan capital, saying that they want peace, will not take revenge against old enemies and would respect the rights of women within the framework of Islamic law. But thousands of Afghans, many of whom helped U.S.-led foreign forces over two decades, are desperate to leave.

"We are continuing at a very fast momentum, logistics show no glitches as of now and we have been able to remove a little over 2,200 diplomatic staff, foreign security staff and Afghans who worked for embassies," the Western security official said. It was unclear when civilian flights would resume, he said. The official did not give a breakdown of how many Afghans were among the more than 2,200 people to leave nor was it clear if that tally included more than 600 Afghan men, women and children who flew out Sunday, crammed into a U.S. military C-17 cargo aircraft.

The Taliban, fighting since their 2001 ouster to expel foreign forces, seized Kabul on Sunday after a lightning offensive as U.S.-led Western units withdrew under a deal that included a Taliban promise not to attack them as they leave.

U.S. forces running the airport had to stop flights on Monday after thousands of frightened Afghans swamped the facility looking for a flight out. Flights resumed on Tuesday as the situation came under control. As they consolidated power, the Taliban said one of their leaders and co-founders, Mullah Abdul Ghani Baradar, had returned to Afghanistan for the first time in more than 10 years.

He chose to touch down in Afghanistan's second-biggest city Kandahar – the Taliban's spiritual birthplace and capital during their first time in power. He arrived from Qatar, where he has spent months leading talks with the U.S. and then Afghan peace negotiators.

Footage released by pro-Taliban media showed crowds gathering around Baradar at the airport, pumping their fists in the air and chanting in celebration. But for those fearing reprisals from the Taliban, the emotions were opposite. Baradar was arrested in Pakistan in 2010, but released from prison in 2018 at the request of former U.S. President Donald Trump's administration so he could participate in peace talks.

"Sometimes I stand in front of the window and I think about how I got here and how I'm lucky that I'm not in Afghanistan now," Afghan human rights researcher Mohammad Ehsan Saadat, who fled his home country with his family, told Agence France-Presse (AFP) in Canada.

In Kabul, some shops have reopened and traffic is on the streets, but schools remain closed and tensions are still high. "The fear is there," said a shopkeeper who asked not to be named after reopening his store.

As Baradar was returning, a Taliban spokesperson held the movement's first news briefing since their return to Kabul, suggesting they would impose their laws more softly than during their earlier time in power, between 1996-2001.

"We don't want any internal or external enemies," Zabihullah Mujahid, the Taliban's main spokesperson, told reporters, revealing his identity for the first time. "All those in the opposite side are pardoned from A to Z," Mujahid said. "We will not seek revenge."

Mujahid said the new regime would be "positively different" from their 1996-2001 stint, infamous for deaths by stoning, girls being banned from school, and women prevented from working in contact with men.

"If the question is based on ideology, and beliefs, there is no difference ... but if we calculate it based on experience, maturity, and insight, no doubt there are many differences," Mujahid told reporters. He also said they were "committed to letting women work in accordance with the principles of Islam," without offering specifics.

A spokesperson for the group in Doha, Suhail Shaheen, told Britain's Sky News that women would not be required to wear the all-covering burqa, but did not say what attire would be acceptable.

During their rule, also guided by Shariah, the Taliban stopped women from working. Girls were not allowed to go to school and women had to wear all-enveloping burqas to go out and only when accompanied by a male relative.

In an interview, Ramiz Alakbarov, U.N. humanitarian coordinator for Afghanistan, told Reuters that the Taliban had assured the U.N. it can pursue humanitarian work in Afghanistan, which is suffering from a severe drought. The European Union said it would only cooperate with Taliban authorities if they respected fundamental rights, including those of women.

Meanwhile, the leaders of the Taliban will show themselves to the world, an official of the movement said Wednesday, unlike during the past 20 years, when its leaders have lived largely in secret.

"Slowly, gradually, the world will see all our leaders, there will be no shadow of secrecy," the senior Taliban official, who declined to be identified, told Reuters.

The official said Taliban members had been ordered not to celebrate their recent sweep of the country, which brought them to the capital, Kabul, on Sunday, and added that civilians should hand over weapons and ammunition.

"They have to walk the talk. Right now they are not doing that," she told Reuters.

Several women were ordered to leave their jobs during the Taliban's rapid advance across Afghanistan. Mujahid said the Taliban would not seek retribution against former soldiers and government officials, and were granting an amnesty for ex-soldiers as well as contractors and translators who worked for international forces.

"Nobody is going to harm you, nobody is going to knock on your doors," he said, adding that there was a "huge difference" between the Taliban now and 20 years ago. He also said families trying to flee the country at the airport should return home and nothing would happen to them.

Mujahid's conciliatory tone contrasted with comments by Afghan First Vice President Amrullah Saleh, who declared himself the "legitimate caretaker president" after President Ashraf Ghani fled the country, and vowed not to bow to Kabul's new rulers. Saleh appears to have gone underground and it is unclear how much support he can muster in a country exhausted by decades of conflict.

U.S. President Joe Biden and British Prime Minister Boris Johnson said they had agreed to hold a virtual meeting of G-7 leaders next week to discuss a common strategy and approach to Afghanistan.

The decision by Biden, a Democrat, to stick to the withdrawal deal struck last year by his Republican predecessor Trump has stirred widespread criticism at home and among U.S. allies. Biden said he had to decide between asking U.S. forces to fight endlessly or follow through on Trump's withdrawal deal. He blamed the Taliban takeover on Afghan leaders who fled and the army's unwillingness to fight.

"If the Taliban says they are going to respect the rights of their citizens, we will be looking for them to uphold that statement and make good on that statement," State Department spokesperson Ned Price said. Russia and China have quickly signaled their willingness to work with the Taliban. Russia said Tuesday that the Taliban's initial assurances had been a "positive signal" and that the militants were behaving in a "civilized manner."