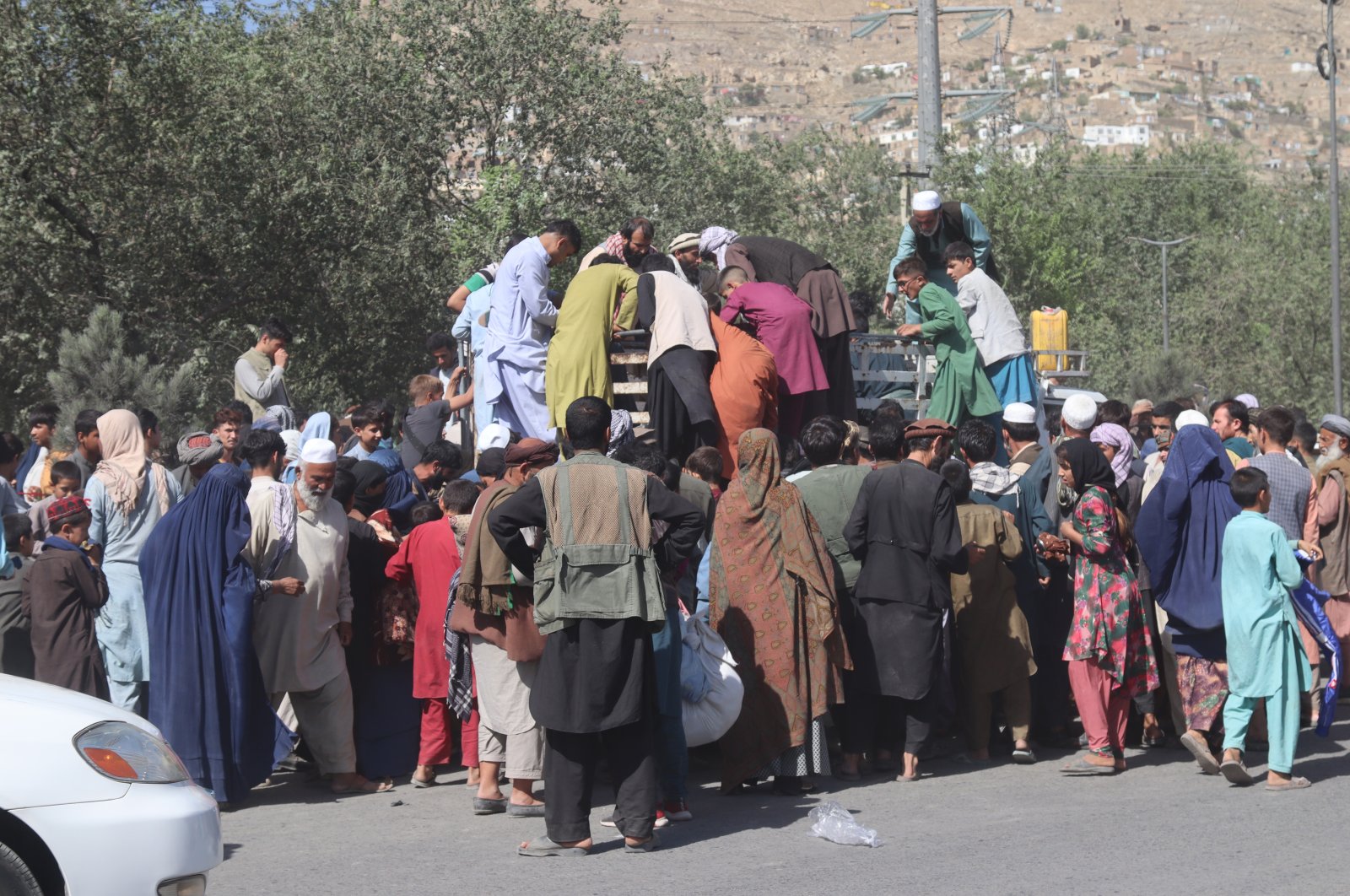 Afghans who are displaced from Kunduz and Takhar provinces due to fighting between Taliban and Afghan forces gather to collect food, as they live in temporary shelters at a camp in Kabul, Afghanistan, Aug. 10, 2021. (EPA-EFE Photo)
by Agencies Aug 11, 2021 3:07 pm
RECOMMENDED

Germany is halting deportations to Afghanistan for the time being due to the unstable security situation in the country, the Interior Ministry said Wednesday.

"The interior minister has decided to suspend deportations to Afghanistan in light of the current security situation," ministry spokesperson Steve Alter wrote on Twitter. "Due to the current developments in the security situation, the interior minister decided to suspend deportations to Afghanistan for the time being," Alter also said, according to remarks carried by the Deutsche Presse-Agentur (dpa).

Since the start of the withdrawal of international troops from Afghanistan in early May, the Taliban have made massive territorial gains. Insurgents have captured control of nine out of 34 provincial capitals in recent days, with the fighting resulting in a rising number of civilian casualties.

The Netherlands also announced Wednesday it was suspending deportations. Dutch State Secretary for Justice and Security Ankie Broekers-Knol announced a "moratorium on (deportation) decisions and departures." The halt "will apply for six months and will apply to foreign nationals of Afghan nationality," she wrote in a letter to the Dutch parliament.

Earlier, Germany and Netherlands were among several EU countries that urged the European Commission to continue the deportation of Afghans migrants despite the worsening situation due to the Taliban's military advance. The governments of Austria, Belgium, Denmark and Greece joined them. Six states wrote to the EU's executive arm saying they should be allowed to send Afghan migrants back if their asylum bids fail.

In a letter dated Aug. 5, the interior ministers of the six states urged the EU’s executive branch to "intensify talks” with the Afghan government to ensure that the deportations of refugees would continue.

"Stopping returns sends the wrong signal and is likely to motivate even more Afghan citizens to leave their home for the EU,” the ministers wrote to the European Commission. The commission confirmed Tuesday that it had received the letter and would reply when ready.

Asked whether Afghanistan was a safe place to forcibly send people, spokesperson Adalbert Jahnz said, "It is up to each (EU) member state to make an individual assessment of whether a return is possible.”

Emboldened by the Biden administration’s decision to pull American troops out of Afghanistan and end NATO’s troop training mission in the country, Taliban insurgents have captured five out of the country’s 34 provincial capitals in less than a week.

Afghan security forces, which have been backed, trained and financed with billions of dollars in a 20-year-long Western military effort that included many EU countries, appear unable to cope with the offensive.