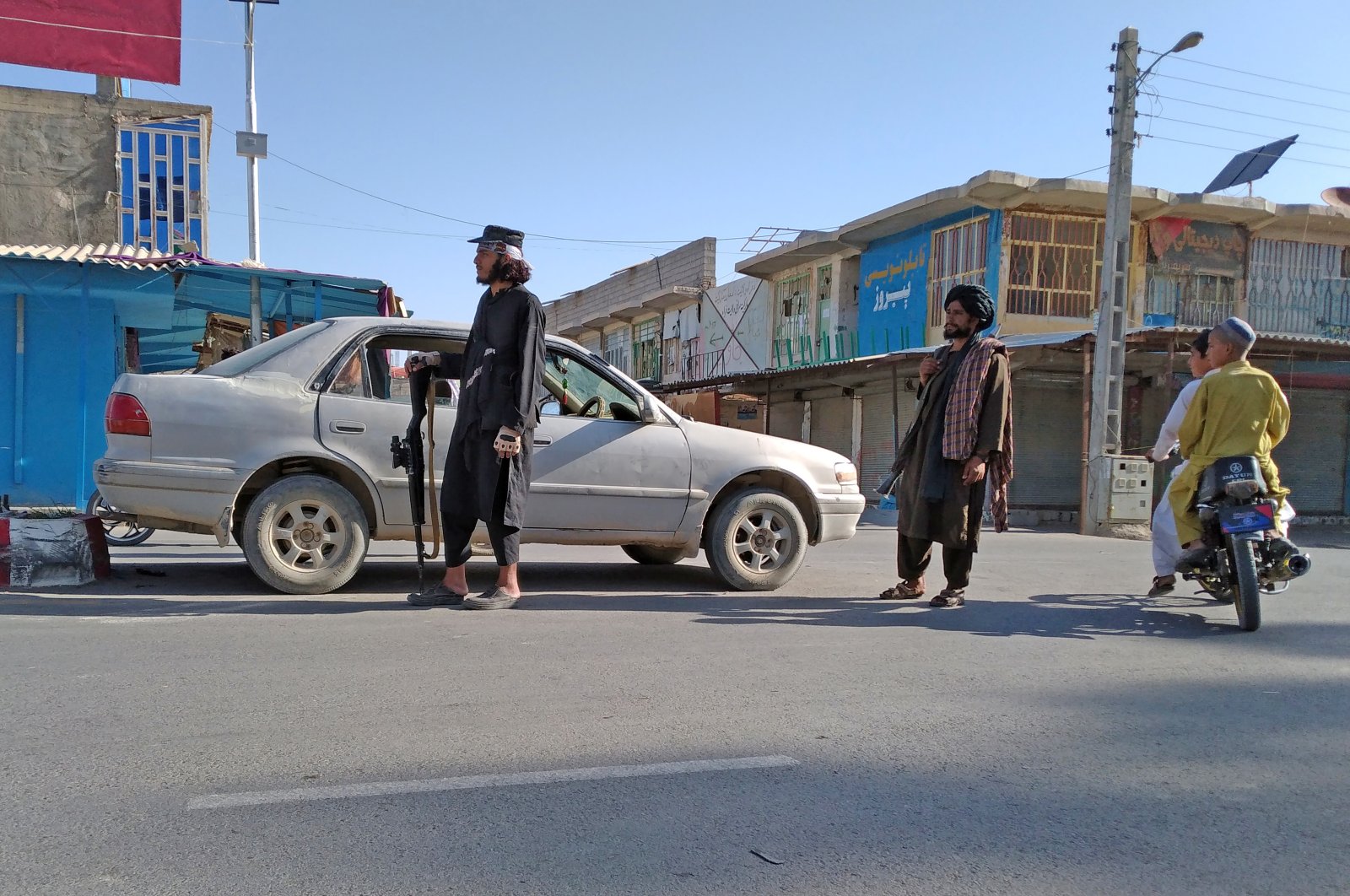 Taliban fighters stand guard at a checkpoint inside the city of Farah, capital of Farah province southwest of Kabul, Afghanistan, Aug. 11, 2021. (AP Photo)
by Agencies Aug 11, 2021 9:13 am
RECOMMENDED

Taliban militants continue their advance in Afghanistan, taking over their ninth provincial capital in the country, local officials confirmed Wednesday.

All high-ranking local officials and security forces stationed in the city have been able to retreat to the Warsaj district in the neighboring Takhar province where security forces from Taluqan, the capital of Takhar, had retreated to three days ago, the officials added.

According to Niazi, the families of all pro-government forces have either escaped or are hiding following the collapse of the city.

With the collapse of Faizabad, a city with an estimated population of over 78,000, the Taliban now control nine provincial capitals of the country's 34 provinces.

The Taliban capture of Faizabad came as President Ashraf Ghani landed in Mazar-e-Sharif to rally its defenders as Taliban forces closed in on the biggest city in the north.

All of these cities have been captured within less than a week. The city of Farah in the west and Pul-e Khumeri city in northern Baghlan province were captured hours before the collapse of Faizabad city.

Badakhshan is known for its gold and lapis lazuli mines. The province also shares a border with Tajikistan, Pakistan and China. The Russian Defense Ministry urged the countries of the Collective Security Treaty Organization (CSTO) to be prepared against the threat of drug smugglers and terrorists infiltrating Russia through the Central Asian states as the militants have taken control of the entire length of Afghanistan's border with Uzbekistan and Tajikistan

The country’s Defense Minister Sergei Shoigu, speaking at a forum titled “Territory of Senses” in Moscow on Tuesday, stated that the Russian, Tajik and Uzbek armies conducted joint drills near the Afghan border. He added that Moscow will continue to hold such exercises with its Central Asian allies in the region on a regular basis. The joint drills conducted by troops from the three countries on Tuesday are designed to respond to the aggravated situation in the region and repel terrorist threats from neighboring Afghanistan.

After a long battle in Faizabad, government forces retreated to a neighboring district, Mujadidi, the provincial council member from Badakhshan, told Reuters. He said Taliban fighters had taken most of the province and laid siege to Faizabad before launching an offensive Tuesday.

The loss of the city is the latest setback for the beleaguered government, which has been struggling to stem the momentum of Taliban assaults in the last few months. The Taliban are battling to defeat the United States-backed government. The speed of their advance has shocked the government and its allies.

Taliban forces now control 65% of Afghanistan, have taken or threaten to take 11 provincial capitals and seek to deprive Kabul of its traditional support from national forces in the north, a senior European Union official said Tuesday.

Afghan officials and the Taliban said Wednesday that the insurgents seized a major army base in Kunduz province, completing their northeast blitz.

The base of the 217 Corps fell Wednesday at the airport. The Taliban posted video online that the group described as showing soldiers abandoning the base. The Afghan government did not immediately respond to a request for comment. The 217 Corps is one of seven commands in the Afghan National Army.

U.S. President Joe Biden urged Afghan leaders to fight for their homeland, saying on Tuesday he did not regret his decision to withdraw, noting that the U.S. had spent more than $1 trillion over 20 years and lost thousands of troops.

The U.S. was providing significant air support, food, equipment and salaries to Afghan forces, he said.

The north was for years Afghanistan's most peaceful region, with only a minimal Taliban presence. During their 1996 to 2001 rule, the Taliban were never completely in control of the north but this time, they seem intent on securing it before closing in on the capital.

The government has withdrawn from hard-to-defend rural districts to focus on holding population centers. In some places, government forces have given up without a fight.

Ghani is now appealing for help from the old regional powerbrokers he spent years sidelining as he attempted to project the authority of his central government over traditionally wayward provinces.

He will meet key regional leaders in Mazar-e-Sharif.

"President Ghani is scheduled to meet local government and security officials, political and other group leaders, tribal elders and influential people," the presidential office said on Twitter. In the south, government forces are battling Taliban fighters trying to reach Kandahar province's main prison to release detained comrades, officials there said. Fighting is also taking place in the city of Farah in the west, near the Iranian border, Tolo News reported.

After a stunning blitz by Taliban, Ghani replaced the army chief, while Afghanistan’s acting Finance Minister Khalid Payenda quit and left the country on Wednesday, according to media reports.

In Geneva on Tuesday, United Nations human rights chief Michelle Bachelet said reports of violations that could amount to war crimes and crimes against humanity were emerging, including "deeply disturbing reports" of the summary execution of surrendering government troops.

Some civilians who have fled Taliban advances have said that the insurgents imposed repressive restrictions on women and burned down schools. There have also been reports of revenge killings in areas where the Taliban have gained control.

Six European Union member states warned the bloc's executive against halting deportations of rejected Afghan asylum-seekers arriving in Europe, fearing a possible replay of a 2015-2016 crisis over the arrival of more than a million migrants, mainly from the Middle East.

The U.S. will complete the withdrawal of its forces this month in exchange for Taliban promises to prevent Afghanistan being used for international terrorism. The Taliban promised not to attack foreign forces as they withdraw but did not agree to a cease-fire with the government.