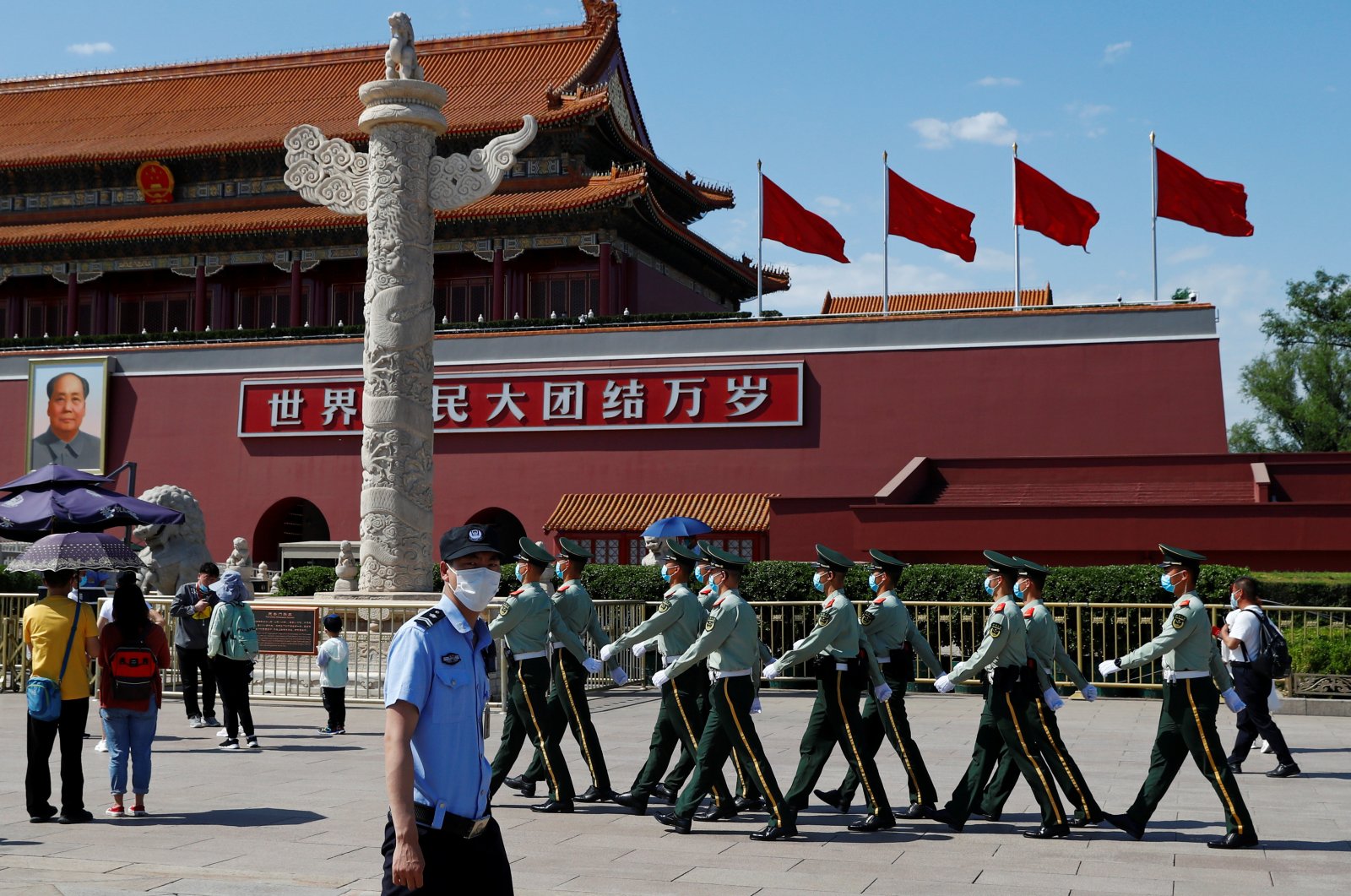 Paramilitary police officers walk in formation in Tiananmen Square near the Great Hall of the People, the venue of the upcoming People's National Congress (NPC) in Beijing, China, May 19, 2020. (Reuters Photo)
by French Press Agency - AFP May 19, 2020 12:35 pm
RECOMMENDED

Hong Kong on Tuesday extended anti-virus measures limiting public gatherings until June 4, a move that means an annual vigil marking the Tiananmen crackdown will likely not take place for the first time in 30 years.

The candlelight vigil usually attracts huge crowds and is the only place on Chinese soil where such a major commemoration of the anniversary is still allowed.

Last year's gathering was especially large and came just a week before seven months of pro-democracy protests and clashes exploded onto the city's streets, sparked initially by a plan to allow extraditions to the authoritarian mainland.

But the coronavirus looks set to end the tradition this year, after authorities said they would extend social distancing rules banning more than eight people gathering in public.

"We have always been extending the measure on a 14-day basis. Our general consideration is mainly on public health," Health Minister Sophia Chan told reporters.

Organizers said they now expected authorities to refuse permission for the annual vigil, which is usually held in Victoria Park.

"We believe the chance is very slim for our application to be approved," Lee Cheuk-yan, chairman of the Hong Kong Alliance in Support of Patriotic Democratic Movements in China, told AFP.

"If the candlelight vigil is banned, it's going to be a symbolic moment as we have been doing it for three decades," he added.

Lee said he expected Hong Kongers might light candles in their local parks instead.

The Tiananmen crackdown began on June 4, 1989, when China's leaders sent tanks and troops to quell student protesters calling for democracy and an end to corruption.

Hundreds were killed, with some estimates suggesting that more than 1,000 perished.

Three decades on, the crackdown remains one of the most sensitive subjects in mainland China and any mention of it is strictly censored.

But in semi-autonomous Hong Kong, which maintains liberties unseen on the mainland, the memory of Tiananmen has been kept alive.

Millions hit the streets to protest Beijing's crackdown in 1989 when the city was a British colony.

The annual vigils continued up to and after the 1997 handover and have become especially charged in recent years as many Hong Kongers chafe under Beijing's rule.

Last year's huge and often violent democracy protests in Hong Kong came to an end at the start of the year as police ramped up arrests and the coronavirus pandemic spread.

Small flash-mob rallies have bubbled up in recent weeks after the easing of social distancing measures.

The city has managed to keep the virus in check, with just over 1,000 infections and four deaths. Bars, restaurants, gyms and cinemas have largely reopened in recent weeks.

Authorities said Tuesday that religious gatherings would be allowed to reopen but only at half capacity. Saunas, party rooms, nightclubs and karaoke lounges will stay closed until at least May 28.