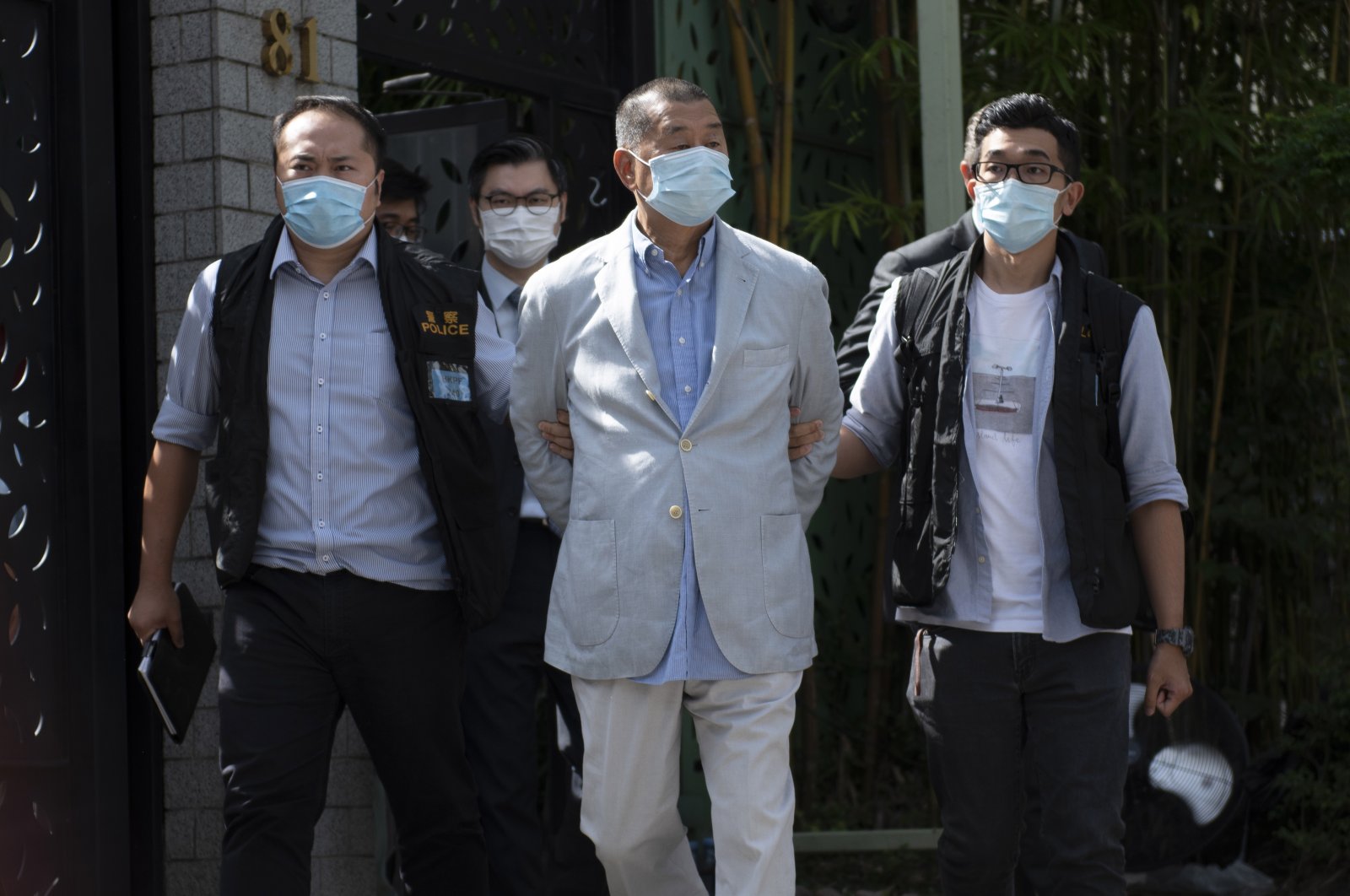 Hong Kong police arrested media tycoon Jimmy Lai and raided the publisher's headquarters Monday in the highest-profile use yet of a new national security law Beijing imposed on the city in June.

"Jimmy Lai is being arrested for collusion with foreign powers at this time,” Mark Simon, an executive of Lai's media group and his aide, wrote on Twitter.

Masked and wearing a blue shirt and a light gray blazer, Lai was led out of his mansion in Kowloon by police officers also wearing surgical masks and was taken away. The 71-year-old owns popular tabloid Apple Daily and is an outspoken pro-democracy figure in Hong Kong who regularly criticizes China’s authoritarian rule.

Hong Kong police said seven people between 39 and 72 years old had been arrested on suspicion of violating the new security law, with offenses including collusion with a foreign country, but the statement did not reveal the names of those arrested. The police did not rule out further arrests being made.

The move, coming days after the U.S. government announced sanctions on Hong Kong and mainland Chinese officials, shows China's determination to move forward with enforcement of the new law despite outside pressure.

The officials shrugged off the sanctions, which may have limited practical effect, with one saying that being named by the U.S. showed that he was doing the right thing for Hong Kong and China. They have rejected any criticism of Hong Kong policy as foreign interference in China's domestic affairs.

Simon said police searched both Lai’s and his son’s home, and detained several other members of media group Next Digital, which Lai founded.

It was not immediately clear how Lai or others at the newspaper may have colluded with foreign forces since the law went into effect.

Last year, Lai met U.S. Vice President Mike Pence and Secretary of State Mike Pompeo at the White House to discuss Hong Kong’s controversial legislation – since withdrawn – that would have allowed criminal suspects to be extradited to mainland China to stand trial.

But Hong Kong officials have said that the national security law, which took effect June 30, would not be applied retroactively. The law is widely seen as a means to curb dissent after anti-government protests rocked the semi-autonomous city for months last year.

At times, officers appeared to get into heated exchanges with Next Digital staff present at the scene. Police also cordoned off the headquarters while the raid was being conducted.

Next Digital operates the Apple Daily tabloid, which Lai founded in 1995, ahead of Britain’s handover of Hong Kong to China. Like Lai, Apple Daily has a strong pro-democracy stance and often urged its readers to take part in pro-democracy protests.

The security law outlaws secessionist, subversive and terrorist acts, as well as collusion with foreign forces in the city's internal affairs. The maximum punishment for serious offenders is life imprisonment.

Last month, Chinese broadcaster CCTV said pro-democracy activist Nathan Law and five others were wanted under the law, although all six had fled overseas. Law had relocated to Britain in July to continue international advocacy work for Hong Kong.