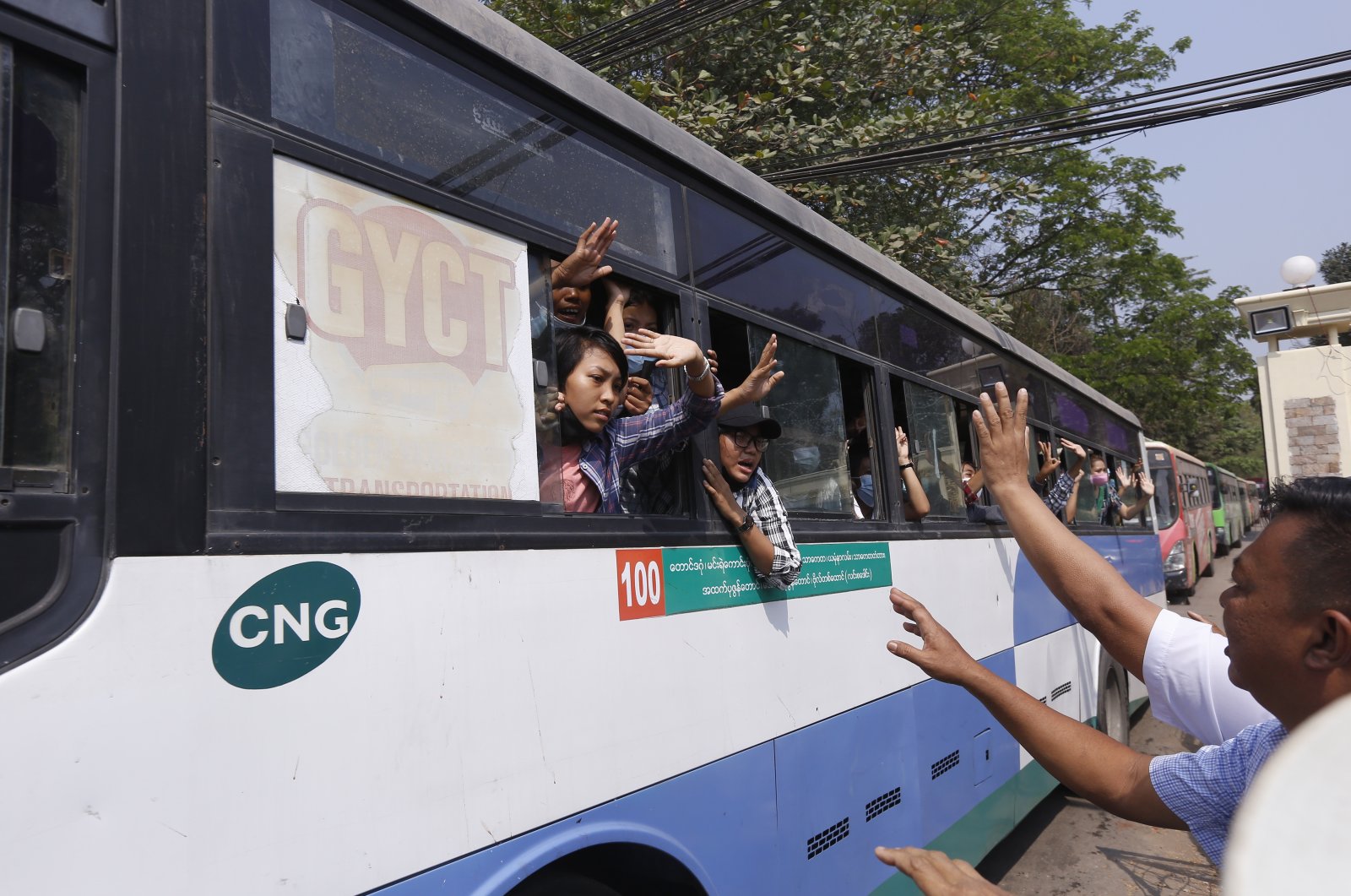 Arrested protesters wave to people while on board a bus that is part of a convoy of buses getting out of Insein prison and will transport them to an undisclosed location in Yangon, Myanmar, March 24, 2021. (AP Photo)
by French Press Agency - AFP Mar 24, 2021 9:37 am
RECOMMENDED

Myanmar freed more than 600 coup detainees from prison on Wednesday, amid fresh outrage at the junta's brutal crackdown on protesters.

The regime has unleashed a deadly wave of violence as it struggles to quell nationwide protests against the Feb. 1 ouster and arrest of Aung San Suu Kyi.

The 75-year-old Nobel laureate was due to have a court hearing on Wednesday in Myanmar's capital Naypyidaw, on criminal charges that could see her permanently barred from political office.

But her lawyer Khin Maung Zaw said the hearing was adjourned until April 1 because of problems with videoconferencing caused by a junta-imposed internet shutdown.

In the commercial hub, Yangon more than 600 people held for protesting against the coup were released on Wednesday from Insein prison.

Lawyer Khin Maung Myint, who was at Insein prison for the hearing of two other clients, said 16 busloads of people left the jail at 10 a.m. local time (4 a.m. GMT).

"They were sent to related police stations to go back home... Some clients called me (after) informing me of their release," he told AFP.

Local media showed images of the prisoners on the buses flashing the three-fingered salute – a sign of resistance for the anti-coup movement – as people waiting outside the prison waved at them and returned the gesture.

Activists called for a nationwide "Silent Strike" on Wednesday, and streets were bare in the cities of Yangon and Naypyidaw.

In the southern city of Myeik, rows of dolls were set up along roads, holding up tiny signs reading "We need democracy" and "We wish for Mother Suu to be healthy."

Three people were killed on Tuesday including seven-year-old girl Khin Myo Chit, shot dead at her home in Mandalay, according to the Assistance Association for Political Prisoners (AAPP), a local monitoring group.

AFP has yet to independently verify the girl's death.

Aid group Save the Children and AAPP both say that at least 20 people aged under 18 have been killed in the crackdown.

"We are horrified that children continue to be among the targets of these fatal attacks on peaceful protestors," Save the Children said in a statement.

"The safety of children must be protected under all circumstances and we once again call on security forces to end these deadly attacks against protesters immediately."

The charity said it was also extremely worried about "hundreds of young people" being held in detention.

Myanmar's junta on Tuesday defended its seven-week crackdown, insisting it would not tolerate "anarchy."

AAPP has verified 275 deaths since the coup, but warns the toll could be higher, and says more than 2,800 people have been detained.

Suu Kyi's lawyer said that on Wednesday morning there was a large police presence outside the court gates and lawyers were not being allowed into the building.

Khin Maung Zaw said he has still not been able to speak to his client privately.

She is also being investigated for corruption allegations.

The military junta alleges the detained chief minister of Yangon confessed to giving Suu Kyi $600,000 in cash, along with more than 11 kilograms ($680,000 worth) of gold.

The junta has also been targeting the media.

Thein Zaw, a photographer for Associated Press (AP), who has been charged with "spreading false news" is also due for a second legal hearing at a court in Yangon's notorious Insein prison on Wednesday.

If convicted he faces up to three years in jail.

He was arrested while covering a protest late last month alongside other reporters.

More than 40 journalists and photographers have been arrested since the coup last month, according to a local monitoring group.