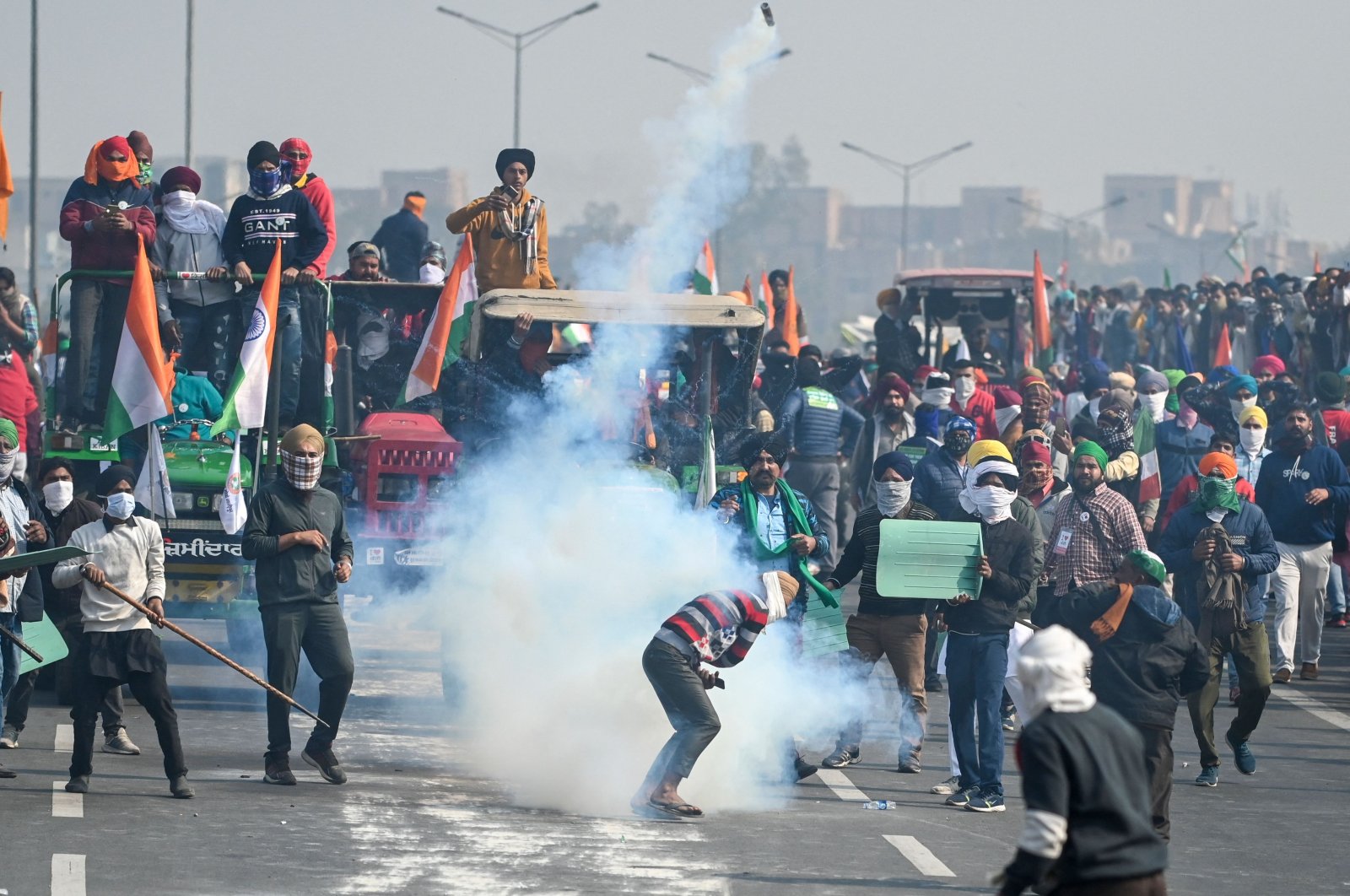 A farmer throws back a tear gas shell fired by the police to disperse them during a tractor rally as farmers continue to demonstrate against the central government's agricultural reforms in New Delhi, India, Jan. 26, 2021. (AFP Photo)
by Agencies Nov 19, 2021 8:17 am
RECOMMENDED

India's Prime Minister Narendra Modi said Friday his government will withdraw the controversial farm laws that prompted yearlong protests from tens of thousands of farmers who said the laws will shatter their livelihoods.

Modi made the surprise announcement during a televised speech that was broadcast live. He said the constitutional process to repeal the laws will begin in December when Parliament sits for the winter session.

"We have decided to repeal all three farm laws. We will start the constitutional process to repeal all the three laws in the parliament session that starts at the end of this month," Modi said in an address to the nation. "I appeal to all the farmers who are part of the protest ... to now return to your home, to your loved ones, to your farms and family. Let's make a fresh start and move forward," he added.

The announcement came on the day of the Guru Purab festival, when Sikhism founder Guru Nanak’s birthday is celebrated, and ahead of key elections in states like Uttar Pradesh and Punjab. Most of the protesters were Sikh farmers from Punjab, as The Associated Press (AP) reported.

The laws were passed in September last year and the government had defended them, saying they were necessary to modernize India's agricultural sector and will boost production through private investment. But the farmers protested, saying the laws will devastate their earnings by ending guaranteed pricing and forcing them to sell their crops to corporations at cheaper prices.

The government had so far yielded very little to the drawn-out demonstrations that posed one of the biggest political challenges to Modi, who swept polls for the second time in 2019.

In November last year, the farmers escalated their movement by hunkering down on the outskirts of New Delhi, where they have camped out for nearly a year, including through a harsh winter and a coronavirus surge that devastated India earlier this year.

While the farmers’ protest movement has been largely peaceful, demonstrators in January broke through police barricades to storm the historic Red Fort in the capital’s center. Clashes with police left one protester dead and hundreds injured.

Small farmers say the changes make them vulnerable to competition from big businesses and that they could eventually lose price support for staples such as wheat and rice.

The government says reform of the sector, which accounts for about 15% of the $2.7 trillion economy, means new opportunities and better prices for farmers.

Rakesh Tikait, a farmers' group leader, said the protests were not being called off. "We will wait for Parliament to repeal the laws," he said on Twitter.

Modi's Bharatiya Janata Party (BJP) government said last year that there was no question of repealing the laws. It attempted to break the impasse with farmer groups by offering to dilute the legislation, but protracted negotiations failed. The government failed to convince small groups of farmers of its intentions, Modi said in a speech.

"We welcome the announcement made by the prime minister, but we need to know the government's stand on our other key demand of making (minimum support prices) compulsory for all crops," said Darshan Pal, another farmers' leader.

Minimum support prices are state-set prices at which the government buys rice and wheat from farmers. The expanded demand for minimum prices on all crops has gained traction among farmers from across the country, not just the northern grain belt.

"Whether it was fear of losing UP or finally facing up to conscience @BJP govt rolls back farm laws. Just the beginning of many more victories for people's voices." Mahua Moitra, a lawmaker from the Trinamool Congress Party and one of Modi's staunchest critics, said on Twitter

Amarinder Singh, former chief minister of Punjab state – home to many of the protesting farmers – on Friday hailed Modi's announcement as "great news."

"Thankful to PM @narendramodi ... for acceding to the demands of every punjabi" he tweeted, according to Agence France-Presse (AFP).