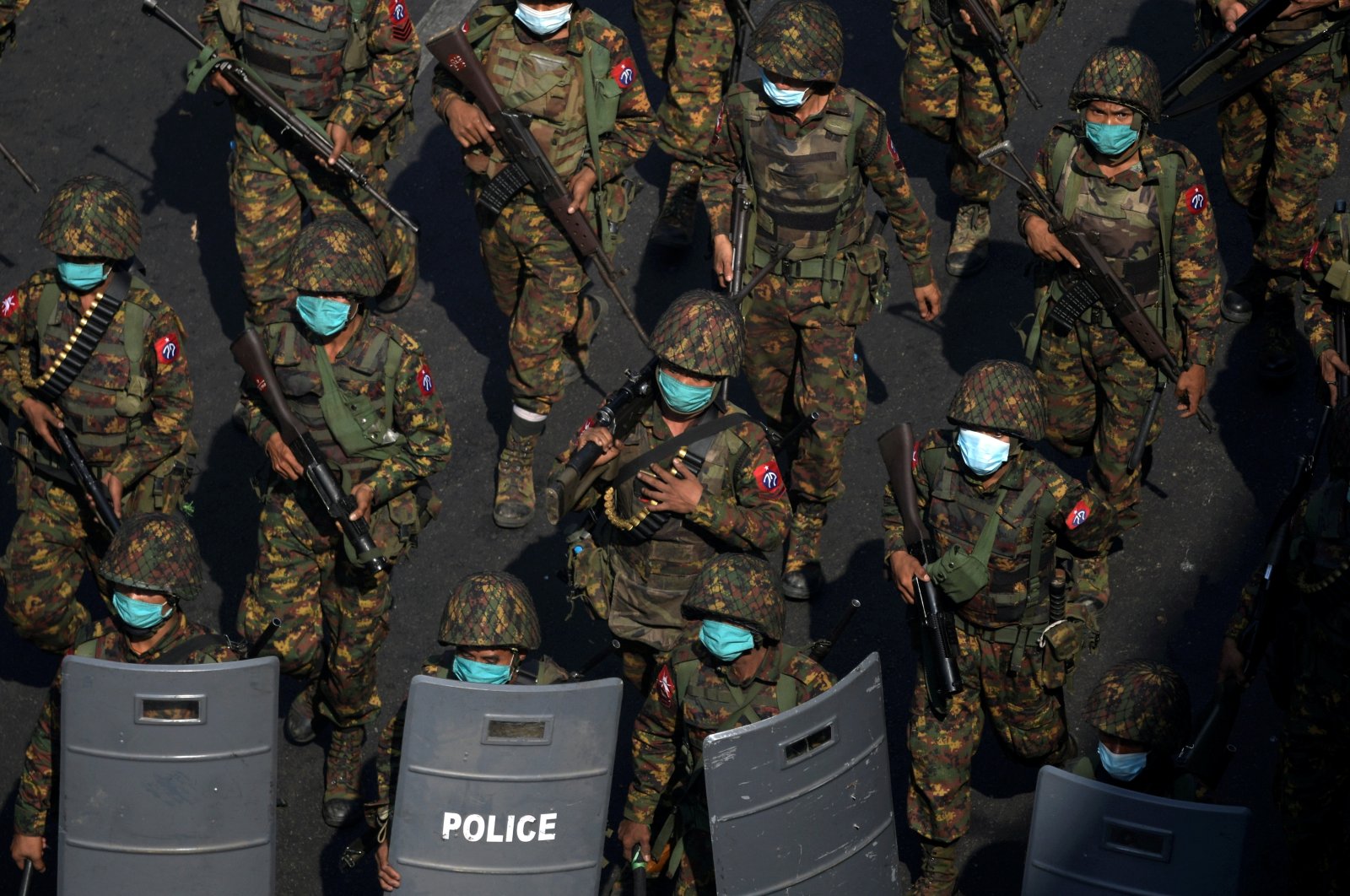 Myanmar soldiers from the 77th light infantry division walk along a street during a protest against the military coup in Yangon, Myanmar, Feb. 28, 2021. (Reuters Photo)
by French Press Agency - AFP Sep 08, 2021 11:05 am
RECOMMENDED

After the self-proclaimed shadow government of Myanmar made a call for a "defensive war" against the junta, protesters have destroyed around a dozen military-owned communications towers, witnesses and reports said Wednesday.

The country has been in chaos since the military seized power in February, sparking mass pro-democracy rallies followed by a deadly crackdown and renewed fighting with ethnic rebel militias in border areas.

More than 1,000 civilians have been killed and nearly 8,000 arrested, according to local observers.

Protesters said they targeted 11 mobile phone masts belonging to the military-owned Mytel, one of the country's four main cell networks, in the town of Budalin in the central Sagaing region.

"Our intention is to destroy the military business. Their businesses support (them) to maintain their power. Therefore, we have to destroy it," a resident involved in the operation told Agence France-Presse (AFP).

Video footage from local media shows an explosion at the base of one tower followed by the structure falling down, to applause from onlookers.

While attacks on military-owned infrastructure and businesses have been seen before, Tuesday's spate of blasts comes after a call to arms from the so-called National Unity Government (NUG).

The NUG, which claims to be the country's legitimate government, is made up of dissident lawmakers in hiding or exile, many of them from ousted leader Aung San Suu Kyi's party.

"We launch a people's defensive war against the junta," he said in a recorded video.

"All citizens within ... Myanmar revolt against the military terrorists led by Min Aung Hlaing."

As early as May the NUG announced the formation of "people's defense forces" to take on the junta's heavily-armed, battle-hardened troops, but they have yet to have a major impact.

The military authorities – officially known as the State Administration Council (SAC) – dismiss the NUG and its affiliates as "terrorists" seeking to bring the country to ruin.

Junta spokesperson Zaw Min Tun accused the NUG of attention-seeking ahead of the United Nations General Assembly in New York next week which will consider whether the junta or shadow government should represent Myanmar.

"The terrorist groups realize that they are nearly failing. That's why they attempt to keep up their efforts in order to grab international attention," Zaw Min Tun said in a statement.

The junta has defended its power grab by alleging massive fraud during elections in late 2020 which Suu Kyi's National League for Democracy won by a landslide.