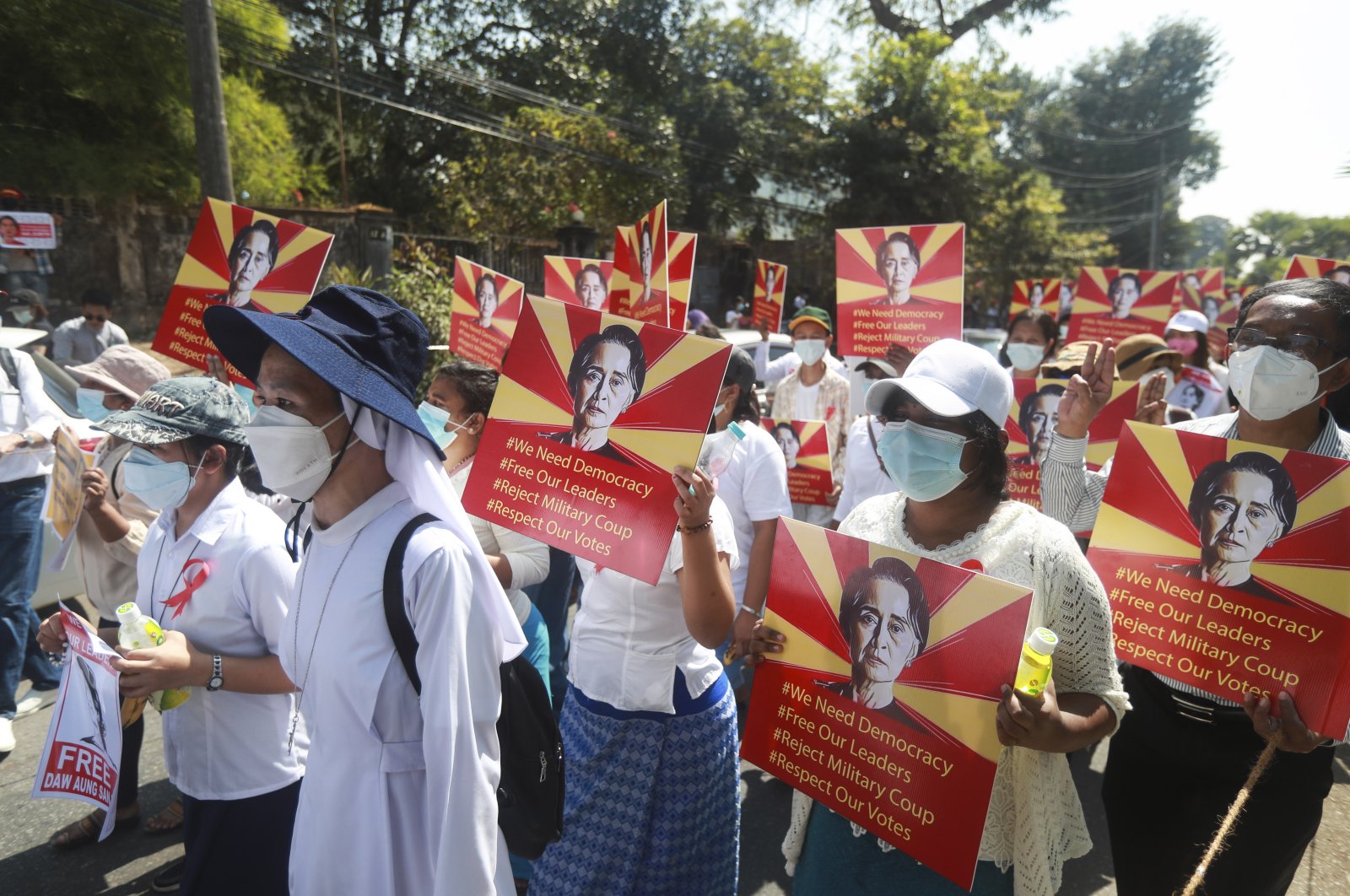 Vast numbers of people all over Myanmar flouted orders against demonstrations Sunday to march again in protest against the military takeover that ousted the elected government of Aung San Suu Kyi.

Large demonstrations were held in the major cities of Yangon, Mandalay and the capital, Naypyitaw, as well as in far-flung areas dominated by ethnic minorities.

Protesters in Yangon again rallied outside the Chinese and U.S. embassies. They accuse Beijing of propping up the military regime and applaud Washington’s actions sanctioning the military.

"The civil disobedience movement and demonstrations show that the people of Myanmar want democracy. We stand with them,” said a statement Saturday on the U.S. Embassy’s Twitter account.

Other protesters carried signs urging people to boycott businesses linked to the military.

Civil servants have been very active in Myanmar protests, and social media postings on Sunday indicated that state railway workers have joined them, with some unconfirmed claims that they have gone on strike.

The military seized power in Myanmar on Feb. 1, detaining Suu Kyi and members of her government and preventing recently elected lawmakers from opening a new session of parliament.

The junta, led by Senior Gen. Min Aung Hlaing, said it was forced to step in because the government failed to properly investigate allegations of fraud in last year’s election, which Suu Kyi’s National League for Democracy party won in a landslide. The state election commission refuted that contention, saying there is no evidence to support it.

Eight days of street demonstrations are estimated to have drawn hundreds of thousands of people to the streets despite the threat of six months' imprisonment for violating an order banning gatherings of five or more people. The same order imposes an 8 p.m. to 4 a.m. curfew.

Protesters also have reason to fear for their personal safety, as police have used rubber bullets to try to break up some demonstrations. A 19-year-old woman who was shot in the head with what experts said was live ammunition at a protest in Naypyitaw was on life support in a hospital and was not expected to recover.

Tributes to the woman were held Sunday by protesters in Yangon and Mandalay, Myanmar's second-biggest city.

Public concern is also rising at what many charge is the military’s manipulation of criminals released from prison to carry out violence and instill panic.

The government last week declared an amnesty that led to the release of more than 23,000 convicts. There are many claims on social media that some have been recruited by the authorities to carry out violent activities at night in residential areas to spread panic, especially by setting fires. Some areas have set up their own neighborhood watch groups in response.

The truth of the allegations about government-directed thugs is difficult to verify, even with videos claiming to show their activities. There is historical precedent, as the military released convicts to carry out violence and cause chaos in 1988 during a failed popular uprising against a military dictatorship.

There was already outrage at nighttime raids during the curfew period in which security personnel tried to seize people from their homes.

In several cases, neighbors and other people rushed to the scene in such numbers that security forces abandoned their attempts to haul in their targets. Videos of such raids were widely posted on social media.

Detainees have included political leaders, government officials, civil servants, activists and student leaders. Medical personnel have been singled out because their community initiated the civil disobedience campaign against the military takeover and remains in its vanguard.

The independent Assistance Association for Political Prisoners says 384 people have been detained since the coup, with 360 still being held. Suu Kyi remains under house arrest, but a remand order holding her on a minor charge of possessing unregistered imported walkie-talkies expires Monday.