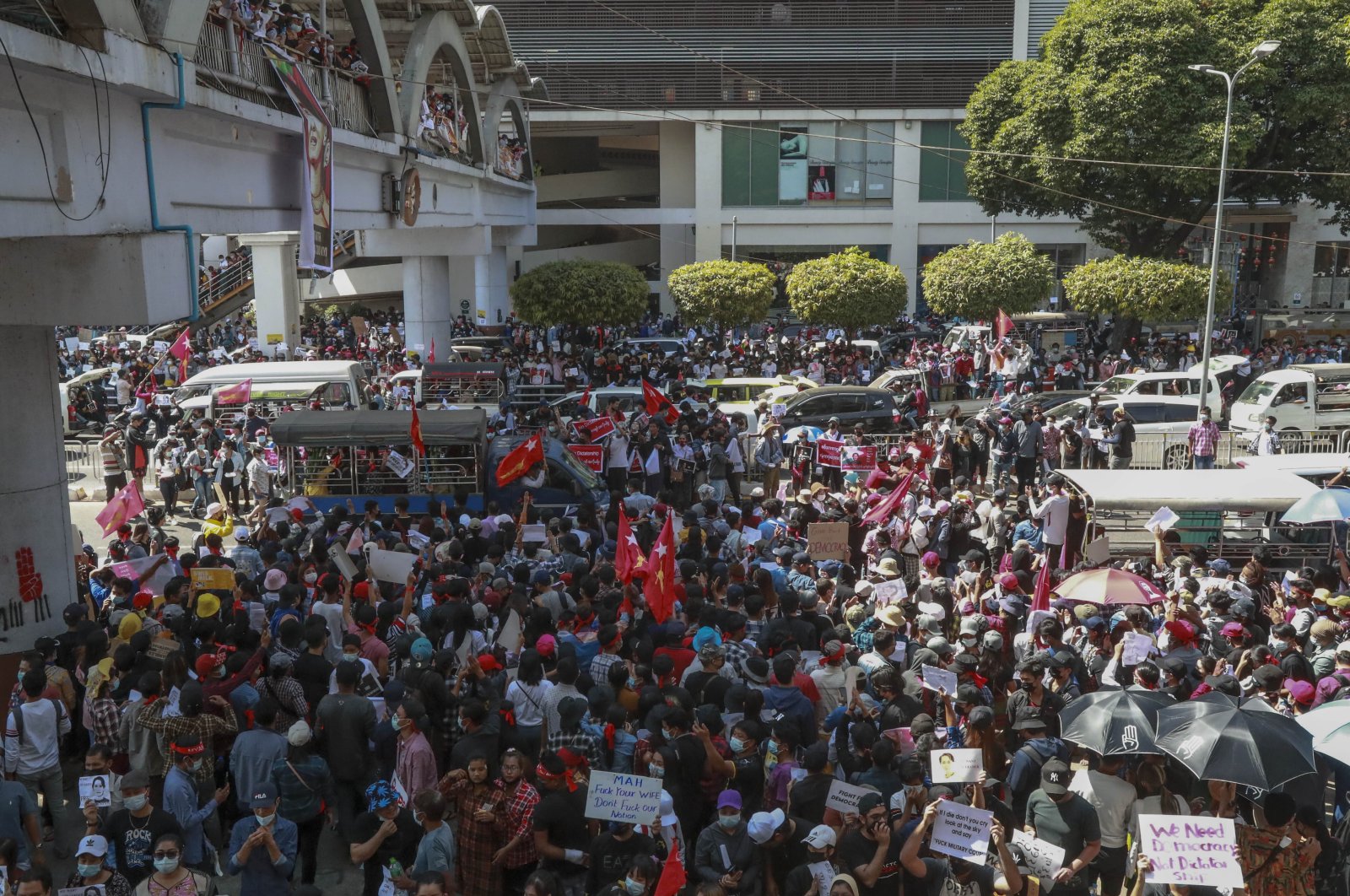 Myanmar demonstrators took to the streets for a fifth consecutive day Wednesday despite police crackdown on anti-coup protests and military stepping up a campaign of intimidation against the ousted civilian leadership.

Protesters took to the streets of Myanmar for a fifth day on Wednesday, vowing to keep up demonstrations against last week's military coup even after a woman was shot and critically wounded during clashes the previous day.

The United States and United Nations condemned Tuesday's use of force against the protesters who are demanding the reversal of the Feb. 1 coup and the release of deposed leader Aung San Suu Kyi, and other leaders of her National League for Democracy (NLD).

"We cannot stay quiet," youth leader Esther Ze Naw told Reuters. "If there is blood shed during our peaceful protests, then there will be more if we let them take over the country."

Thousands of people joined demonstrations in the main city of Yangon. In the capital, Naypyitaw, hundreds of government workers marched in support of a growing civil disobedience campaign.

A group of police in Kayah state in the east joined the protesters and marched in uniform with a sign that said "We don't want dictatorship," according to pictures published in media.

There were no reports of violence Wednesday but soldiers took over a clinic that had been treating wounded protesters in Naypyitaw on Tuesday, a doctor there said.

Another doctor said a woman protester was expected to die from a gunshot wound to the head sustained during a Tuesday confrontation with police in Naypyitaw.

She was wounded when police fired, mostly into the air, to clear the protesters. Three other people were being treated for wounds from suspected rubber bullets, doctors said.

Protesters were also hurt in Mandalay and other cities, where security forces used water cannons and arrested dozens.

Four policemen were injured Tuesday as they tried to disperse protesters, some of whom threw stones and bricks, the military said.

The military has imposed restrictions on gatherings and a night curfew in the biggest cities.

The protests are the largest in Myanmar in more than a decade, reviving memories of almost half a century of direct army rule and spasms of bloody uprisings until the military began relinquishing some power in 2011.

The military justified its takeover on the grounds of fraud in a Nov. 8 election that Suu Kyi's NLD party won by a landslide, as expected. The electoral commission dismissed the army's complaints.

Western countries have condemned the coup but taken little concrete action to press for the restoration of democracy.

The U.S. State Department said it was reviewing assistance to Myanmar to ensure those responsible for the coup faced "significant consequences."

"We repeat our calls for the military to relinquish power, restore democratically elected government, release those detained and lift all telecommunication restrictions and to refrain from violence," spokesperson Ned Price said in Washington.

"The use of disproportionate force against demonstrators is unacceptable," Ola Almgren, the U.N. representative in Myanmar, said.

Avinash Paliwal, a senior lecturer in international relations at London University's School of Oriental and African Studies, said Myanmar will not be as isolated now as it was in the past, with China, India, Southeast Asian neighbors and Japan unlikely to cut ties.

"The country is too important geo-strategically for that to happen. The U.S. and other Western countries will put sanctions – but this coup and its ramifications will be an Asian story, not a Western one," Paliwal said.

A doctor in Naypyitaw said the woman who was shot in the head was in a critical condition and not expected to survive. A social media video verified by Reuters showed her with other protesters some distance from a row of riot police as a water cannon sprayed and several shots could be heard.

The woman, wearing a motorcycle helmet, suddenly collapsed. Pictures of her helmet showed what appeared to be a bullet hole.

"Now we see the military takes brutal action against us," said Htet Shar Ko, an interpreter. "But we young people will keep fighting against the regime under our motto - military dictatorship must fail."

Alongside the protests, a civil disobedience movement has affected hospitals, schools and government offices.

Veteran activist Min Ko Naing called in a Facebook post on all government workers to join the disobedience campaign and for people to take note of those who didn't.

Protesters are also seeking the abolition of a 2008 constitution drawn up under military supervision that gave the generals a veto in parliament and control of several ministries, and for a federal system in ethnically diverse Myanmar.

Suu Kyi, 75, won the Nobel Peace Prize in 1991 for campaigning for democracy and spent nearly 15 years under house arrest. She faces charges of illegally importing six walkie-talkies and her lawyer said he has not been allowed to see her.

Suu Kyi remains hugely popular at home despite damage to her international reputation over the plight of the Muslim Rohingya minority.