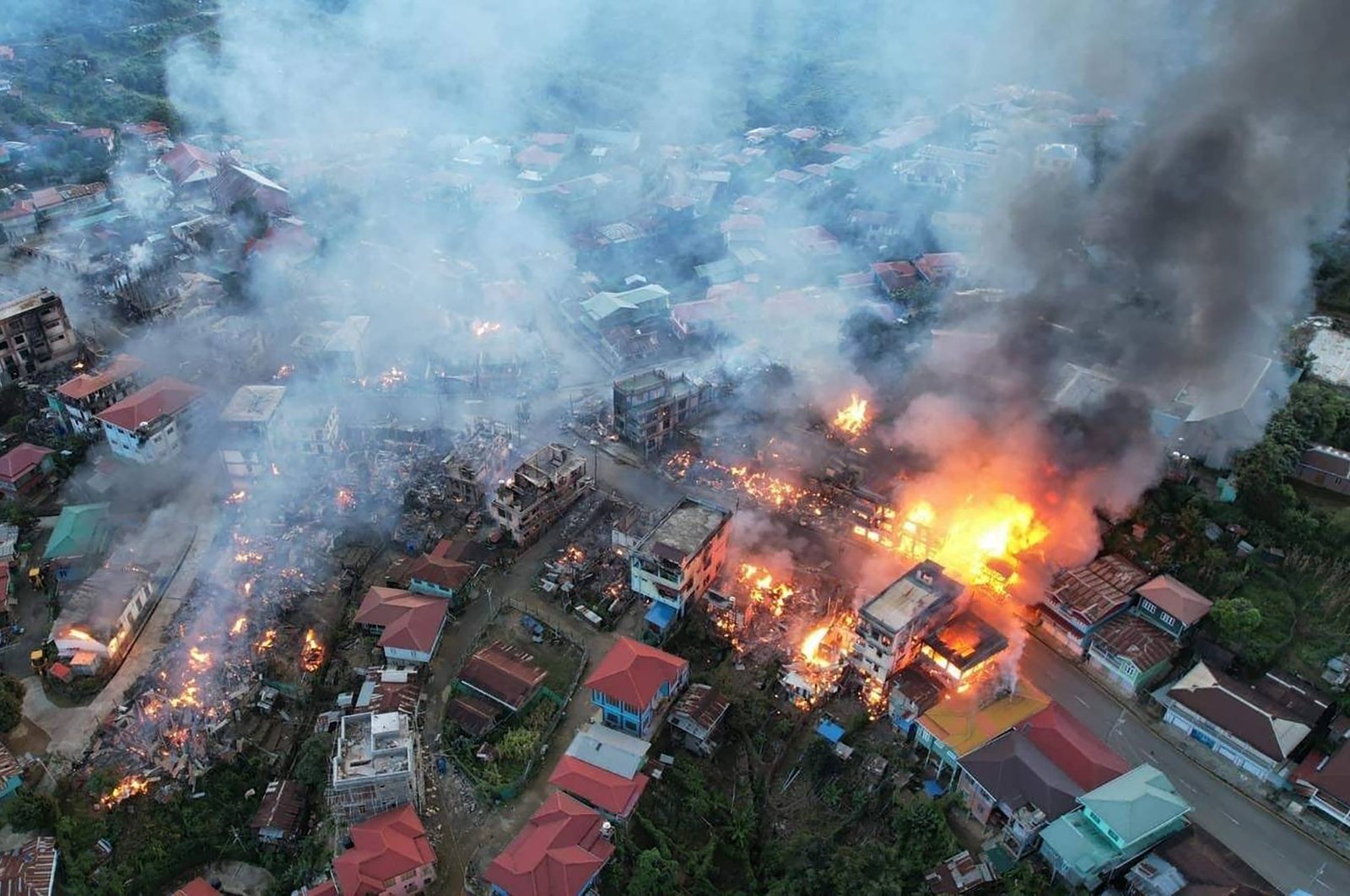 Army shelling in a town in northwest Myanmar has ravaged more than 160 homes that went up in flames, including at least two churches, local media and activists reported Saturday.

The destruction of parts of the town of Thantlang in Chin state appeared to be another escalation in the ongoing struggle between Myanmar’s military-installed government and forces opposed to it. The army seized power in February from the elected government of Aung San Suu Kyi, but has failed to quell the widespread resistance.

A government spokesperson denied “nonsense allegations being reported in the country-destroying media,” and blamed insurgents for instigating the fighting and setting the fires.

Human rights groups and U.N. experts recently warned that the government is planning a major offensive in the country’s northwest, including Chin state, along with the regions of Magway and Sagaing. Residents of the rugged area have a reputation for their fierce fighting spirit, and have put up stiff resistance to military rule despite being only lightly armed with single-shot hunting rifles and homemade weapons.

There were no immediate reports of casualties from the fire, which started early Friday and burned through the night, according to reports.

The humanitarian aid agency Save the Children said its offices were in one of the buildings that were "deliberately set ablaze.”

“The destruction caused by this violence is utterly senseless. Not only has it damaged one of our offices, it risks destroying the whole town and the homes of thousands of families and children,” said a statement from the London-headquartered agency.

Thantlang had already been largely abandoned due to previous attacks by government soldiers.

Eighteen other houses and a hotel were destroyed by fire set off by another shelling on Sept. 18, and a Christian pastor was shot when he tried to help put out the blaze.

More than 10,000 residents then fled the town, some staying temporarily in nearby villages and others seeking shelter across the border in Mizoram, India. About 20 staff and children in care of an orphanage on the outskirts of the town are believed to be its only remaining residents.

The Chin Human Rights Organization issued a statement saying the fires in Thantlang had died down by Saturday morning, after as many as 200 houses may have been destroyed.

“Most of the structures on the main street, which has shop stalls and all kinds of businesses, have been destroyed. There is nothing left to salvage,” said the statement, signed by the group’s deputy executive director, Salai Za Uk Ling. “The manner in which the fire was burning indicates that it was not just the incendiary rocket fires but also deliberately torching of houses and structures manually.”

According to the Chinland Defense Force-Thantlang, a local militia fighting the military, a Presbyterian Church and a building housing the Pentecostal Church on the Rock were among the 164 structures it had counted destroyed by fire.

The defense force said the shelling began after fighting broke out when it tried to prevent government soldiers from looting a house in the town.

In a phone interview Saturday night on state television MRTV, government spokesperson Maj. Gen. Zaw Min Tun said the events began when members of the PDF – or People's Defense Forces, as the local militia are generally known – attacked security forces, who returned fire. He said the insurgents took cover in houses in the town and set fires as they fled, keeping government reinforcements from putting out the flames by shooting at them.

He added that it was not possible to bring firefighting resources from the state capital, Hakha, because a bridge on the road connecting the towns had been blown up on Oct. 21.

"It’s needless to say who blew up the bridge. These videos can be found on country-destroying media," said Zaw Min Thin, in a reference to video that circulated widely on social video showing several explosive charges being detonated on the span. He described the sequence of events as “a deliberate plot.”

The statement from the Chin Human Rights Organization expressed concern that what happened may represent just the beginning of a major government offensive known as “Operation Anawrahta.” The government has not acknowledged such a plan.

“The high number of troops being sent to Chin state in recent days and weeks has been truly unprecedented. They have brought with them destruction and death,” said the human rights group. It called for urgent action on the part of the U.N. Security Council "to help prevent mass atrocities before they happen.”

Back in September, Myanmar's military had launched airstrikes following clashes with fighters opposed to the junta in the Sagaing region, severing phone lines and the internet in some districts according to Reuters.

The Southeast Asian country has been in crisis since the army seized power on Feb. 1, ending a decade of tentative steps towards democracy and triggering outrage at home and abroad and the setting up of People's Defence Forces (PDFs) to take on the military.