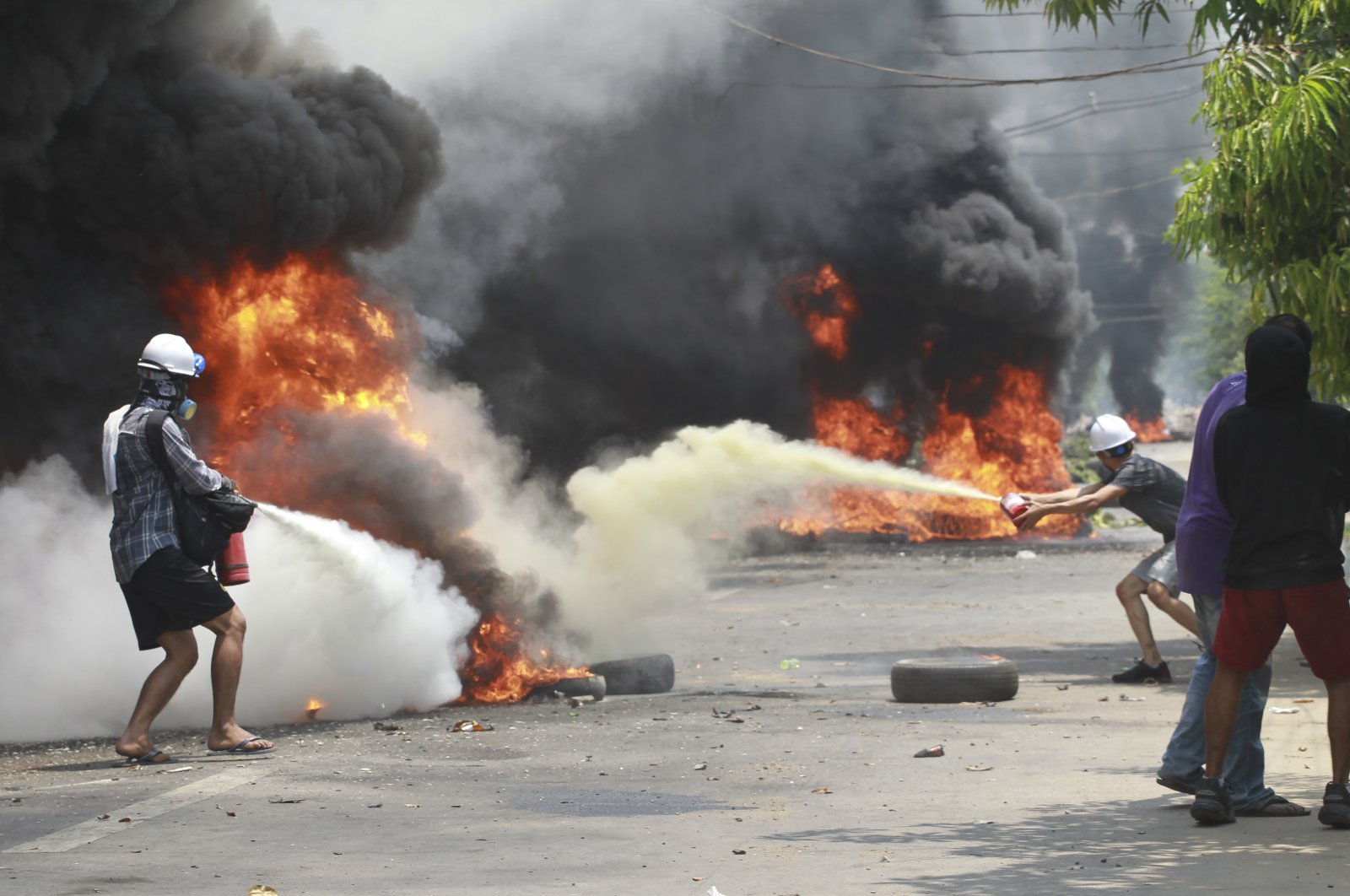 Myanmar's security forces shot and killed at least 114 protesters on Saturday, news reports and witnesses said, a brutal crackdown on dissent that came as the leader of the ruling junta said the military will protect the people and strive for democracy.

Protesters against the Feb. 1 military coup came out on the streets of Yangon, Mandalay and other towns, defying a warning that they could be shot "in the head and back," while the country's generals celebrated Armed Forces Day.

"Today is a day of shame for the armed forces," Dr. Sasa, a spokesperson for the Committee Representing Pyidaungsu Hluttaw (CRPH), an anti-junta group set up by deposed lawmakers, told an online forum.

"The military generals are celebrating Armed Forces Day after they just killed more than 300 innocent civilians," he said, giving a rough estimate of the toll since protests first erupted weeks ago.

At least four people were killed when security forces opened fire at a crowd protesting outside a police station in Yangon's Dala suburb in the early hours of Saturday, Myanmar Now reported. At least 10 people were wounded, the news portal said.

Three people, including a young man who plays in a local under-21 football team, were shot and killed in a protest in the Insein district of the city, a neighbor told Reuters.

Thirteen people were killed in various incidents in Mandalay, Myanmar Now said. Deaths were also reported from the Sagaing region near Mandalay, Lashio town in the east, in the Bago region, near Yangon, and elsewhere, it said.

Myanmar Now said a total of at least 90 people were killed on Saturday. Reuters could not independently verify the numbers killed.

A military spokesperson did not respond to calls seeking comment.

After presiding over a military parade in the capital Naypyitaw to mark Armed Forces Day, Senior General Min Aung Hlaing reiterated a promise to hold elections, without giving any time-frame.

"The army seeks to join hands with the entire nation to safeguard democracy," the general said in a live broadcast on state television, adding that authorities also sought to protect the people and restore peace across the country.

"Violent acts that affect stability and security in order to make demands are inappropriate."

Meanwhile, Turkey strongly condemned the excessive violence towards the civilians in Myanmar in a statement published by the country’s Foreign Ministry Saturday. The ministry reiterated their call for ending such acts against the civilian without delay and the release of all elected leaders, political figures and civilians that have been detained.

The number of people killed in the turmoil since the coup against Aung San Suu Kyi's elected government is now nearly 380, based on Thursday's toll and a tally kept by an activist group.

In an ominous warning on Friday evening, state television said protesters were "in danger of getting shot to the head and back." The warning did not specifically say that security forces had been given shoot-to-kill orders but the junta has previously tried to suggest that some fatal shootings have come from within the crowds.

But it showed the military's determination to prevent any disruptions around Armed Forces Day, which commemorates the start of the resistance to Japanese occupation in 1945 that was orchestrated by Suu Kyi's father, the founder of the military.

Suu Kyi, Myanmar's most popular civilian politician, remains in detention at an undisclosed location. Many other figures in her party are also being held in custody.

In a week that saw international pressure on the junta ramped up with new U.S. and European sanctions, Russia's Deputy Defense Minister Alexander Fomin attended the parade in Naypyitaw, having met senior junta leaders a day earlier.

"Russia is a true friend," Min Aung Hlaing said. There were no signs of other diplomats at an event that is usually attended by scores of officials from foreign nations.

Support from Russia and China, which have also refrained from criticism, is important for the junta as they are permanent members of the United Nations Security Council and can block potential U.N. actions.

Protesters have taken to the streets almost daily since the coup that derailed Myanmar's slow transition to democracy.

Until Friday evening, the activist group Assistance Association for Political Prisoners (AAPP) counted at least 328 protesters who have been killed in the weeks of unrest. Its data shows that around a quarter of them died from shots to the head, raising suspicions they were targeted for killing.

Myanmar's ethnic armed factions will not stand by and do nothing if the junta's forces continue to kill protesters, the leader of one of the main armed groups said.

"It isn’t for the protection of democracy as well, it’s how they harm democracy ... If they continue to shoot at protesters and bully the people, I think all the ethnic groups would not just stand by and do nothing."