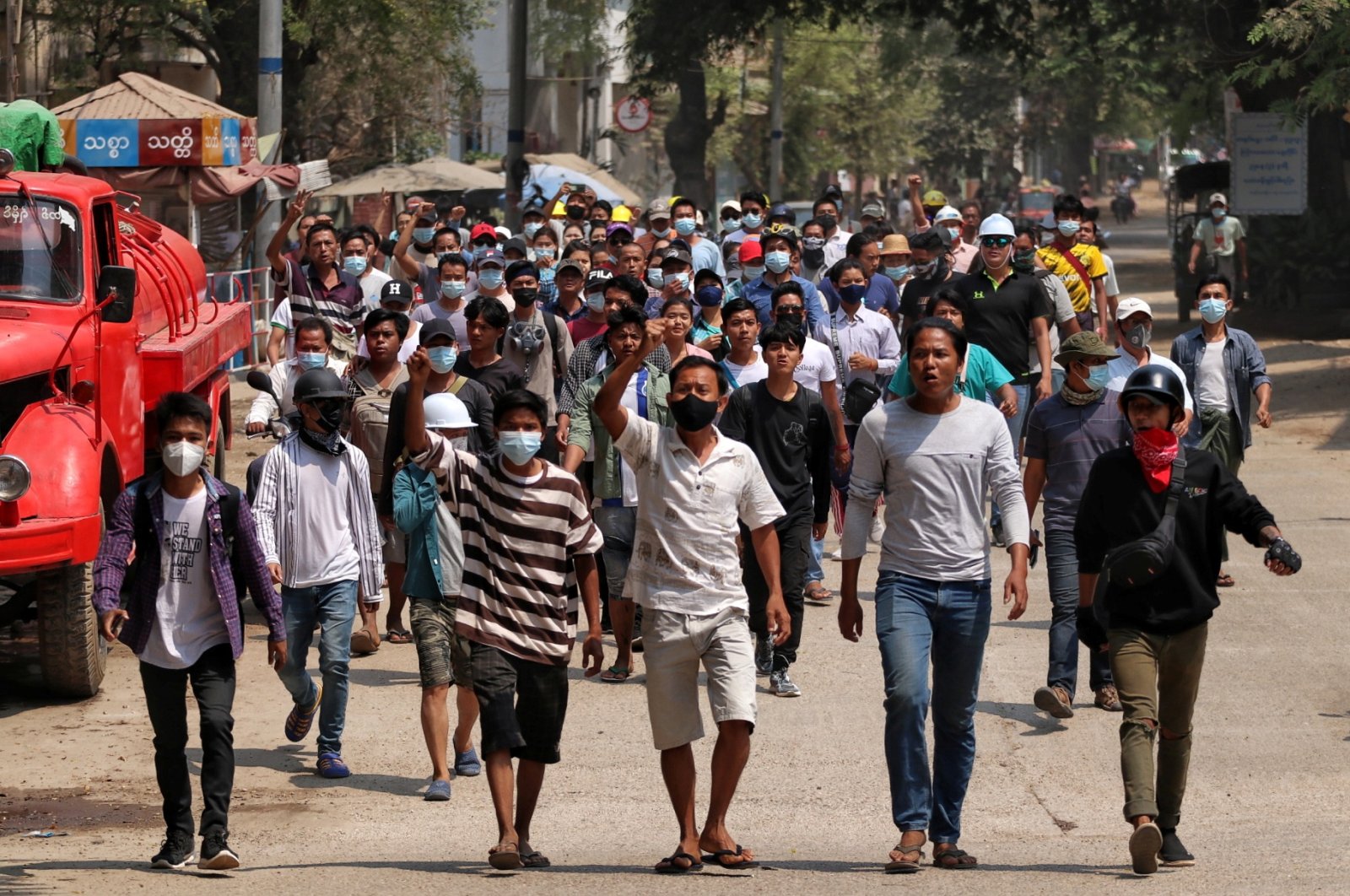 Protesters against the military takeover in Myanmar were not relenting Wednesday as the deadly crackdown on peaceful demonstrations took an increasing toll.

The verified death toll among protesters since the Feb. 1 coup ousting the elected government of Aung San Suu Kyi has now exceeded 200, according to a tally compiled by the independent Assistance Association for Political Prisoners.

"Junta forces target protesters but also ordinary people using sniper rifles regardless of the time or place,” charged the organization.

"Some injured people were arrested and died without access to medical treatment, some individuals have died due to being tortured during interrogation, some others who were shot dead in a crackdown were dragged away without mercy and their dead bodies are not being returned to their families by junta forces,” it elaborated, repeating widespread and credible allegations.

The association, whose tallies include only verified cases, said that as of Tuesday, in addition to 202 fatalities, 2,181 people have been arrested or charged, with 1,862 still being detained or sought.

The coup reversed years of slow progress toward democracy in Myanmar, which for five decades had languished under strict military rule that led to international isolation and sanctions.

Regional media outlets and social media posts reported new peaceful protest marches Wednesday in Taungoo, Thayet, Myingyan, and Madaya, all in central Myanmar, along with Tamu, in the northwest near the border with India, and Pyay, on the Irrawaddy River northwest of Yangon.

There were also fresh reports of the novel protest tactic of lining up rows of signboards in public streets to serve as proxies for human demonstrators, an approach that is being called "non-human strikes.” Such actions took place Wednesday in Pyinmana, a satellite town of the capital Naypyitaw, and Naungcho, a town in Shan State in north-central Myanmar.

Protesters in Yangon’s Kyeemyindine township put a new spin on the tactic, having coconuts stand in for people, painted word by word in Burmese, "Spring Revolution.”

Police in several Yangon neighborhoods on Tuesday night continued their aggressive patrols, firing in the air, attacking several individuals and conducting raids on the homes of suspected protesters. They also dismantled barricades put up Wednesday morning by protesters.

The extent of protests Wednesday in Yangon was hard to gauge as the government further restricted communications, limiting access to timely information. The government ordered mobile internet data service shut on Sunday.

Wi-Fi access, much less extensive, has been left on, but some users reported Wednesday that it has slowed to a crawl, making it difficult to upload photos and video.

Several neighborhoods in Yangon have been under martial law since Monday, putting them under complete control by the military, which has also made it difficult for protesters to organize and communicate.

State television MRTV announced Tuesday evening that a leading figure in the resistance movement, Dr. Sasa, has been charged with high treason, which carries a death sentence.

Sasa, a medical doctor who uses a single name, is a member of the Chin ethnic minority and was appointed a special U.N. envoy by the Committee Representing Pyihtaungsu Hluttaw (CRPH), comprising elected members of Parliament who were not allowed to take their seats.

The CRPH, which operates underground inside the country and with representatives abroad, has established itself as a shadow government that claims to be the sole legitimate representative body of Myanmar’s citizens.

It was declared an illegal treasonous organization by the junta. Sasa is accused of stirring up internal conflict and acting against the junta, which claims to be the country’s sole legitimate ruling body despite having ousted an elected government.

Sasa said he was proud to be charged with treason, "because treason against the junta means that I am standing with the people of Myanmar, giving my life for their freedom, for federal democracy and for justice.”

His statement, dated Tuesday and duplicated on his Facebook page, recounted the Myanmar military’s long history of committing atrocities against ethnic minorities and putting down past protest movements, as well as the killings of civilians following last month’s coup.

"It is these Generals that have committed acts of treason every day. Taking what they want for themselves, denying the people their rights, and oppressing those that stand in their way,” Sasa said.