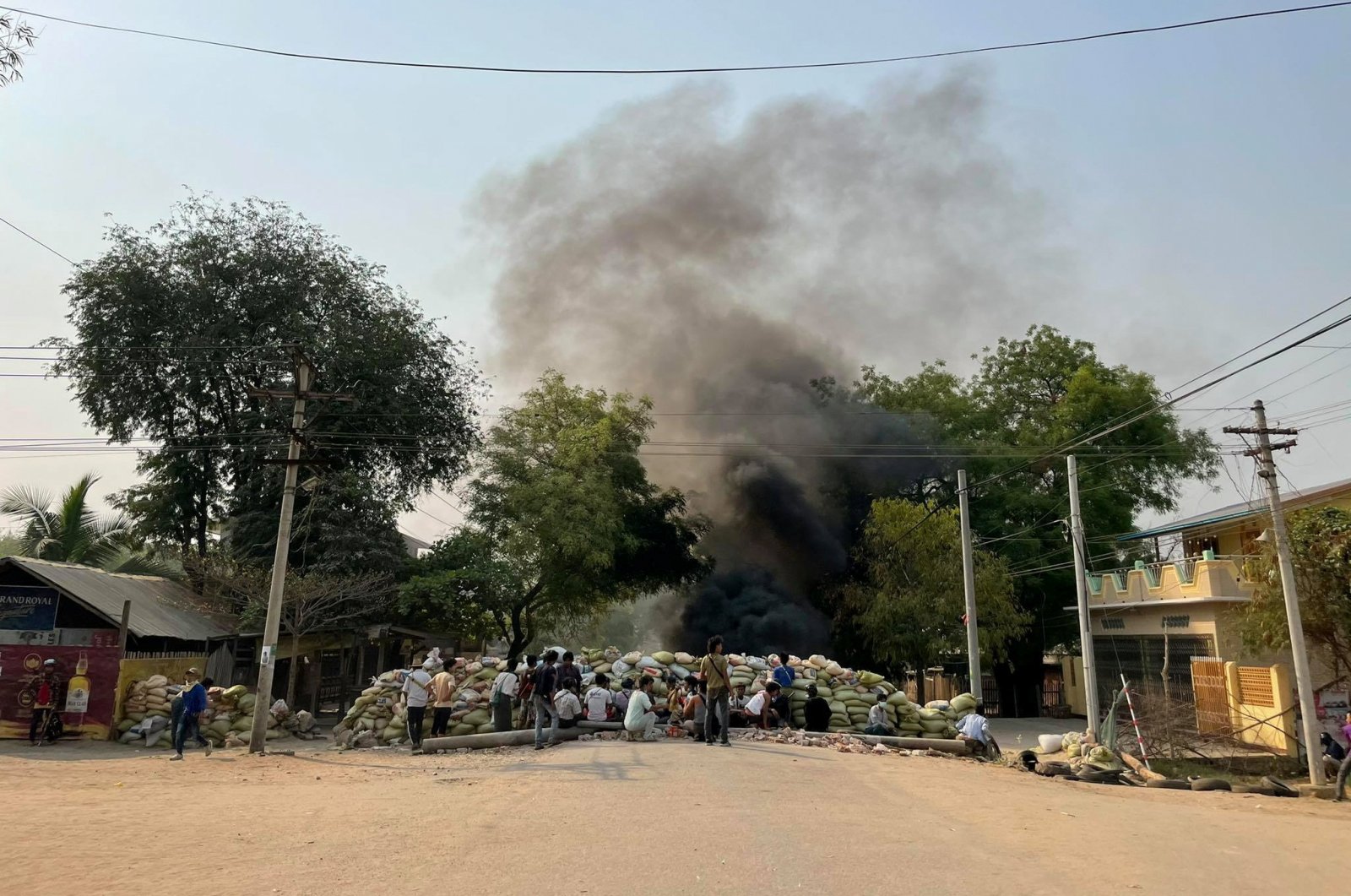 Pro-democracy protesters were met with fire by the Myanmar security forces on Saturday, killing at least five people, a protester and media said, as the military reinforced its bid to end dissent with arrest warrants for online critics and internet blocks.

Despite the killing of more than 550 people by security forces since the Feb. 1 coup, protesters are coming out every day, often in smaller groups in smaller towns, to voice opposition to the reimposition of military rule.

Security forces in the central town of Monywa fired on a crowd killing three people, Myanmar Now news service said, while one man was shot and killed in another central town, Bago, and one in Thaton to the south, the Bago Weekly Journal online news portal reported.

"They started firing non-stop with both stun grenade and live rounds," the protester in Monywa, who asked not to be named, told Reuters via a messaging app. "People backed off and quickly put up ... barriers, but a bullet hit a person in front of me in the head. He died on the spot."

Police and a spokesperson for the junta did not answer telephone calls seeking comment.

The Assistance Association for Political Prisoners activist group said earlier on Saturday the security forces had killed 550 people, 46 of them children, since the military overthrew an elected government led by Aung San Suu Kyi.

The demonstrations that drew tens of thousands of people in the early days of defiance in big cities have largely stopped with opponents of the coup adopting "guerrilla rallies" – small, quick shows of defiance before security forces can respond.

The authorities are waging a campaign to control information. They had shut down mobile data and on Friday ordered internet providers to cut wireless broadband, depriving most customers of access, though some messages and pictures were still being posted and shared on social media.

Authorities issued warrants for 18 celebrities, including social media influencers and two journalists, under a law against material intended to cause a member of the armed forces to mutiny or disregard their duty, state media reported late on Friday.

All of them are known to oppose military rule. The charge can carry a prison term of three years.

Actress Paing Phyoe Thu said she would not be cowed.

"Whether a warrant has been issued or not, as long as I'm alive I'll oppose the military dictatorship who are bullying and killing people. The revolution must prevail," she said on Facebook.

Paing Phyoe Thu regularly attended rallies in the main city of Yangon in the weeks after the coup. Her whereabouts were not immediately known.

State broadcaster Myanma Radio and Television (MRTV) announced the warrants for the 18 with screenshots and links to their Facebook profiles.

While the military has banned platforms like Facebook, it has continued to use social media to track critics and promote its message.

MRTV maintains a YouTube channel and shares links to its broadcasts on Twitter, both of which are officially banned.

"We hope this won’t silence the voices of the people," State Department Spokesperson Jalina Porter told a briefing.

The coup has rekindled old wars with autonomy-seeking ethnic minority forces in the north and the east.

Myanmar's oldest insurgent group, the Karen National Union (KNU), has seen the first military airstrikes on its forces in more than 20 years after it announced its support for the pro-democracy movement.

The KNU said more than 12,000 villagers had fled their homes because of the airstrikes. It called for an international embargo on arms sales to the military.

"Their inhuman actions against unarmed civilians have caused the death of many people including children and students," the group said in a statement.

Media has reported that about 20 people were killed in airstrikes in KNU territory in recent days, including nearly a dozen at a gold mine run by the group.

The KNU signed a cease-fire with the government in 2012 to end their 60-year insurgency.

Fighting has also flared in the north between the army and ethnic Kachin insurgents. The turmoil has sent several thousand refugees fleeing into Thailand and India.