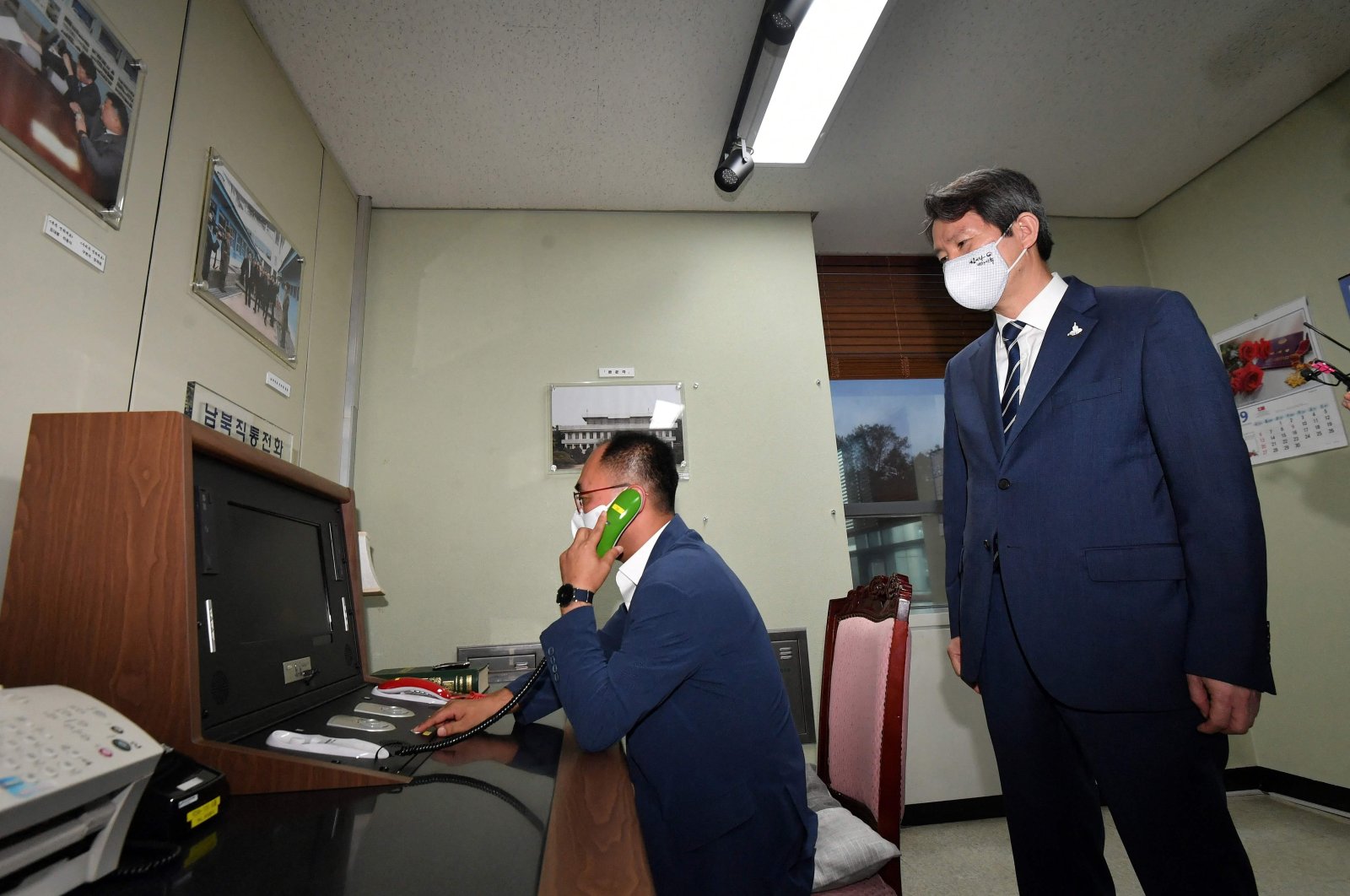 South Korea's Unification Minister Lee In-young (R) looking at the inter-Korean "hotline" during a visit to the south side of the truce village of Panmunjom in the Demilitarized Zone (DMZ) dividing the two Koreas, Sept. 16, 2020. (AFP Photo)
by REUTERS
Jul 30, 2021 9:07 am

North and South Korea are in talks to reopen a joint liaison office that Pyongyang blew up last year and to hold a summit as part of efforts to restore relations, three South Korean government sources with knowledge of the matter said.

The discussions signal an improvement in ties that have deteriorated in the past year after three leaders' summits in 2018 promised peace and reconciliation. Inter-Korean talks have the potential to help restart stalled negotiations between Pyongyang and Washington aimed at dismantling North Korea's nuclear and missile programs in return for sanctions relief, although some analysts remain cautious about this prospect.

The issue is key for Moon, who is facing declining support in his final year in office. He staked his legacy on improving relations with North Korea and helped set up historic meetings between Kim and then U.S. President Donald Trump in 2018 and 2019.

The two Koreas, still technically at war after their 1950-53 conflict ended in a cease-fire, on Tuesday reconnected hotlines North Korea severed in June last year. Both sides are discussing reestablishing a joint liaison office at the border village of Panmunjom, two sources said. Pyongyang spectacularly destroyed the previous office in its border town of Kaesong in 2020. They are also seeking a summit between Moon and Kim, the sources said, but no timeframe or other details have been raised due to the coronavirus pandemic.

North Korea has not confirmed any COVID-19 cases, but it shut borders and imposed strict prevention measures, seeing the pandemic as a matter of national survival.

"The talks are still ongoing, and COVID-19 should be the biggest factor," one source said. "A face-to-face meeting is the best, but hopefully the situation will get better." Moon's office referred to a briefing on Tuesday by his press secretary, Park Soo-hyun, who said the issue of restoring the liaison office was to be discussed, and that the leaders have not floated plans for any summit so far.

A second source said a virtual summit could be an option should North Korea balk at an in-person meeting because of COVID-19. "If we can do that and the North has that capability, it would make a big difference, and open so many windows of opportunity, something to restart talks with the United States."

North Korea, which has not held any meetings with foreign nationals since the pandemic began, has not commented on the prospect of reopening the liaison office.

Moon had called for a revival of the hotlines and offered a video summit with Kim, but Pyongyang had previously responded publicly with scathing criticism, saying it had no intention of talking to Seoul.

The first source said Moon and Kim have exchanged "candid" letters on more than 10 occasions, which led to an opening of a communication channel between Seoul's intelligence authorities and Kim's sister, Kim Yo Jong.

Despite "ups and downs" in the consultations, the two sides agreed over the weekend to reactivate hotlines as a first step. The source said Kim's move reflected a willingness to respond to U.S. overtures for talks, as the administration of President Joe Biden had vowed a practical approach including not naming an envoy for North Korean human rights issues.

"There were some visible elements, including pursuing a phased, action-for-action approach, instead of a grand bargain, and appointing a nuclear negotiator, instead of a human rights envoy," the source said. "After all, Washington has unveiled its policy and the North can't just sit idle, so inter-Korean ties came up as a starting point."

A spokesperson for the U.S. State Department gave a measured response, reiterating that Washington supports inter-Korean dialogue and engagement and that diplomacy and dialogue "are essential to achieving complete denuclearisation and to establishing permanent peace on the Korean Peninsula."

The spokesperson also said Washington was working to appoint a human rights envoy and would "continue to prioritize human rights in our overall approach" to North Korea. U.S. Secretary of State Antony Blinken said in June the Biden administration was determined to appoint such an envoy but did not offer a timeline.

Jenny Town, head of the Washington-based North Korea project 38 North, cautioned that there may be limits as to how far North-South relations could evolve near term, given that the reasons for the stagnation still existed. She also said a resumption of North-South dialogue did not necessarily mean North Korea was interested in resuming talks with Washington.

A third source said the two Koreas only announced the hotline reopenings because little progress was made over other issues, including how Pyongyang would apologize for blowing up the liaison office. Hit by the pandemic and typhoons last year, North Korea faces its worst economic crisis since a 1990s famine killed as many as 3 million.

However, few deaths have been reported from hunger in the latest crisis, the first source said, thanks to Chinese aid and the release of military and emergency reserves. The source said North Korea is expected to resume trade with China as early as August via cargo train services after scrapping plans to do so in April due chiefly to concerns over more contagious variants of the coronavirus. Beijing's Foreign Ministry did not immediately respond to a request for comment, and calls to China's Seoul Embassy were unanswered.