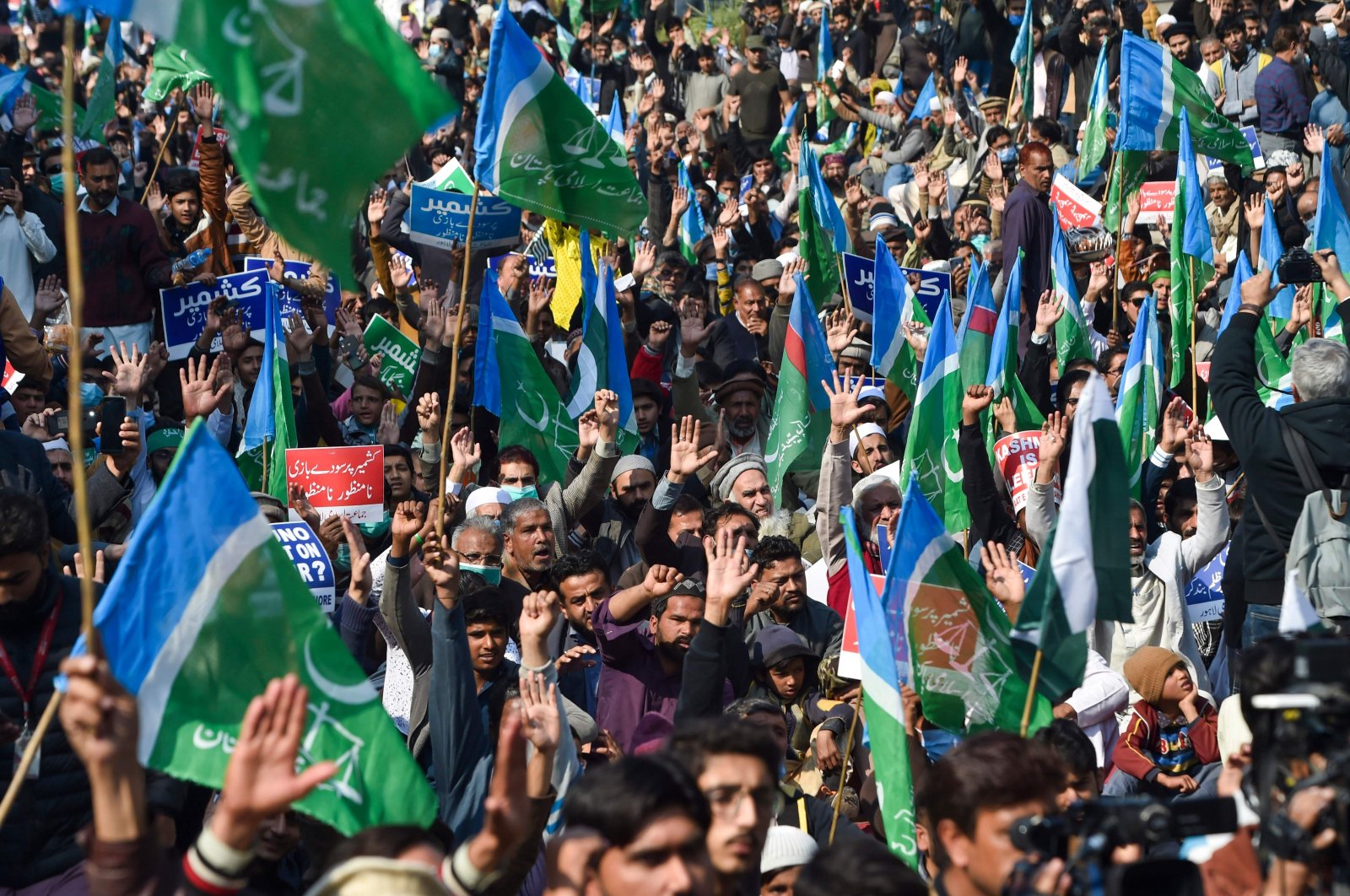 As a national holiday, the day began with special prayers in the mosques for the "liberation of Kashmir." A minute's silence was observed throughout the country at 10 a.m. local time (3 a.m. GMT).

People linked hands to form a chain at the Kohala area and other important sites linking Pakistan and Azad Kashmir.

In Islamabad, the main rally was led by Foreign Minister Shah Mahmood Qureshi near the Parliament house which was attended by Cabinet ministers, lawmakers, government officials and a large number of students.

Rallies, conferences and seminars were also held in all four provincial capitals – Karachi, Lahore, Peshawar and Quetta – to "denounce the human rights violations in Jammu and Kashmir."

Jamaat-e-Islami, the country's mainstream group, which began observing Feb. 5 as Kashmir Solidarity Day in 1990, organized rallies across the country on Friday, including a major congregation in Karachi, Lahore, Islamabad and Peshawar, to express solidarity with the freedom struggle in Indian-administered Jammu and Kashmir.

President Arif Alvi and Prime Minister Imran Khan in their separate messages reiterated that the entire Pakistani nation stood by their Kashmiri brethren "in their valiant struggle to achieve their legitimate right to self-determination."

In his message, Alvi said the resolution of the Jammu and Kashmir dispute in accordance with the relevant United Nations Security Council (UNSC) resolutions and the wishes of the Kashmiri people is "key to durable peace in South Asia."

Alvi warned the changes in demographic structure "of the occupied territory by the Indian government is further violation of international law wherein Kashmir's Muslim majority is being turned into a minority in its own land."

Khan called on the international community to hold New Delhi accountable for its "crimes against humanity in the Indian Illegally Occupied Jammu and Kashmir (IIOJK)."

"India must stop its brutal suppression of Kashmiris, adhere to its international human rights obligations, and honor the commitment to grant to Kashmiris their inalienable right to self-determination through a free and impartial plebiscite under the U.N. auspices," he said.

While observing Kashmir Solidarity Day, Khan said: "We salute the unflinching resolve of Kashmiris in their valiant struggle for the right to self-determination, which was pledged to them by India, Pakistan and the international community." He added that the latest Indian attempt to "further colonize occupied Kashmir by altering its demography and obliterating the distinct Kashmiri identity is reflective of a sinister design to convert the Muslim majority into a minority."

Alvi will address the session of the Azad Jammu and Kashmir Assembly in Muzaffarabad later today while Khan will speak at a public gathering at the Kotli area of Pakistani-administered Kashmir.

Qureshi said Pakistan's solidarity with Kashmiris will continue until Kashmiris achieve their inalienable right to self-determination as enshrined in the U.N. Charter and relevant U.N. Security Council resolutions.

"The entire Pakistani nation stands with them in their valiant struggle to secure their inalienable right to self-determination," the foreign minister said in a statement.

Qureshi expressed deep concern over the "military siege of millions of Kashmiris for the last 18 months." He said that "under the suffocating military siege and in the face of ravaging COVID-19 pandemic, the Indian army has continued cordon-and-search operations, staged ‘fake encounters,' and indulged in a killing spree of Kashmiri youth in IIOJK – thus further accentuating the grave humanitarian tragedy there."

Shehryar Khan Afridi, who leads Pakistan's National Assembly Kashmir Committee, said the country stands for peace in the region, but he warned that in the event of any misadventure by India, there will be retaliation.

"Pakistan wants peace in the region and is ready to move forward if the wishes and aspirations of Kashmiri people are recognized according to UNSC resolutions," Afridi said in a separate official statement.

"Our yearning for peace, however, shouldn't be taken as weakness. Any misadventure by the enemy would be responded to with full force," he added.

The disputed region of Kashmir, a Muslim-majority Himalayan region, is held by India and Pakistan in parts but claimed by both in full. A small sliver of the region is also controlled by China. Since they were partitioned in 1947, New Delhi and Islamabad have fought three wars – in 1948, 1965 and 1971 – two of them over Kashmir. Some Kashmiri groups have been fighting against Indian rule for independence, or for unification with neighboring Pakistan.

Already strained relations between the two neighbors have further plummeted after India scrapped the limited autonomy of the Jammu and Kashmir region on Aug. 5, 2019. It was also split into two federally administered territories.