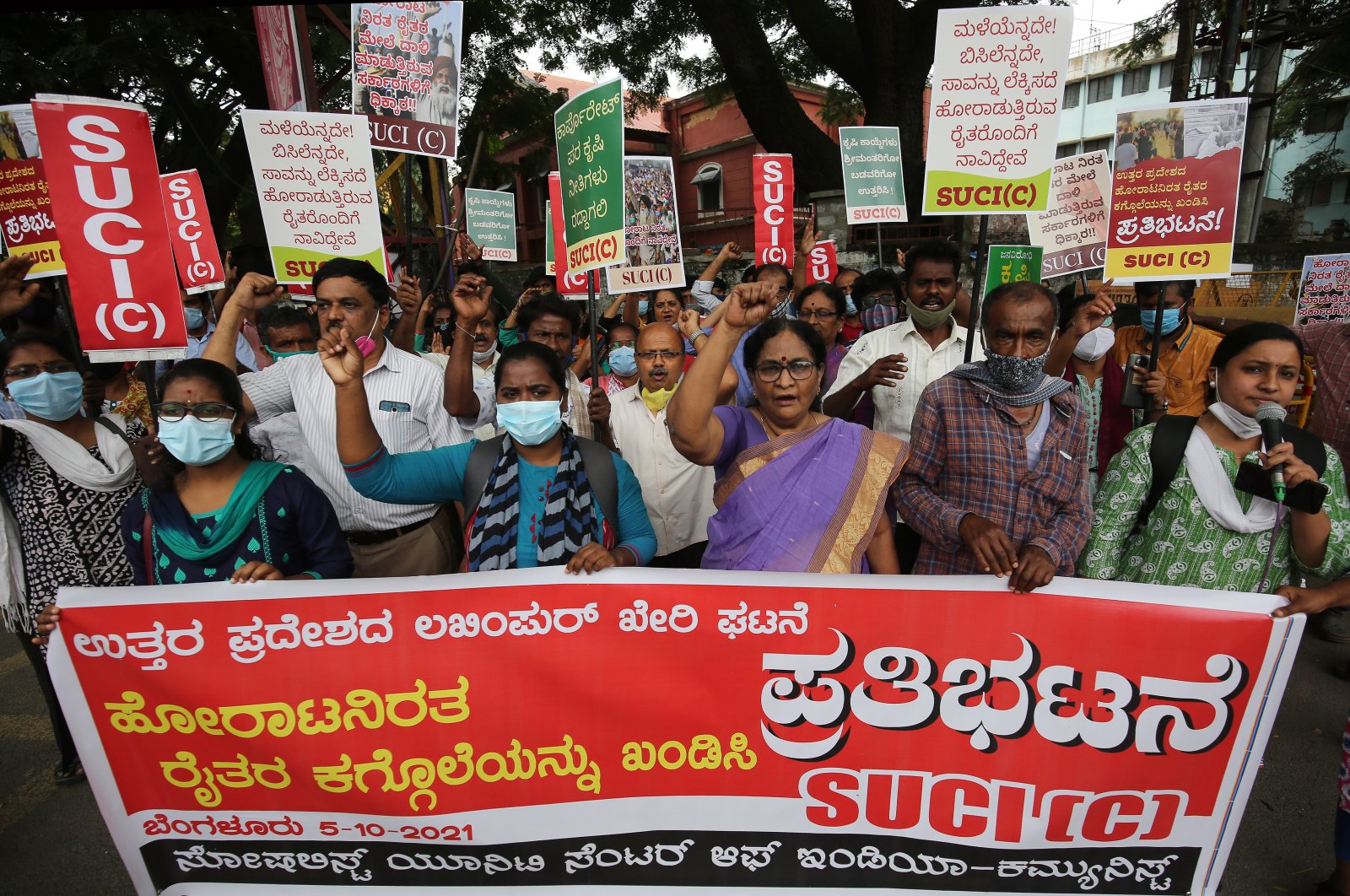 Members of Socialist Unity Centre of India (SUCI) protest as they shout slogans against the Indian Government on the issue of farmers killing in Uttar Pradesh, in Kolkata, Eastern India, Oct. 5, 2021. (EPA Photo)
by ASSOCIATED PRESS
Oct 09, 2021 10:03 pm

Four farmers died Sunday when a car owned by the minister ran over a group of farmers protesting in Lakhimpur Kheri, a town in Uttar Pradesh state, officials and farm leaders said.

Farm leaders alleged that Mishra’s son was in the car when it ran over the protesters, but Mishra denied it. His driver and three members of the ruling Bharatiya Janata Party (BJP), who were in a car, were all killed by the protesters by beating them with sticks in the violence that broke out after the incident.

Police officer Upendra Agarwal said on Saturday that Ashish Misra was arrested following daylong questioning in the town after "he failed to furnish any supportive evidence to prove that he was not present in any of the three vehicles that plowed through a crowd of farmers killing four of them.

"His father Ajay Mishra said that his son was innocent and that he was not present.

The arrest came a day after India’s top court criticized the state government for not arresting Ashish Mishra against whom a criminal case of murder is being investigated by the police. On Friday, Mishra made the police wait for hours for questioning before sending a message that he was unwell and couldn’t make it.

Police earlier this week said they had so far arrested six people and filed a criminal complaint against 14 more, including the minister’s son, in connection with the deaths of the four farmers. The BJP also lodged a criminal complaint against the farmers over the deaths of its members and the car driver, said Arvind Chaurasia, a senior official in charge of the district.

Police also said they recovered the body of a local journalist where violence ensued Sunday but did not provide further details on how he was killed.

The violence marked an escalation in ongoing protests against agriculture laws that farmers say will shatter their livelihoods. The protests have lasted since the government passed the laws last September and have been one of the biggest challenges to Modi.

Last week, thousands of farmers gathered at the edges of the capital New Delhi to mark one year of demonstrations. The government says the changes in the laws were needed to modernize agriculture and boost production through private investment. But the farmers say the laws will devastate their earnings by ending guaranteed pricing and will force them to sell their crops to corporations at cheaper prices.