Race against time as dozens remain missing in Japan mudslide 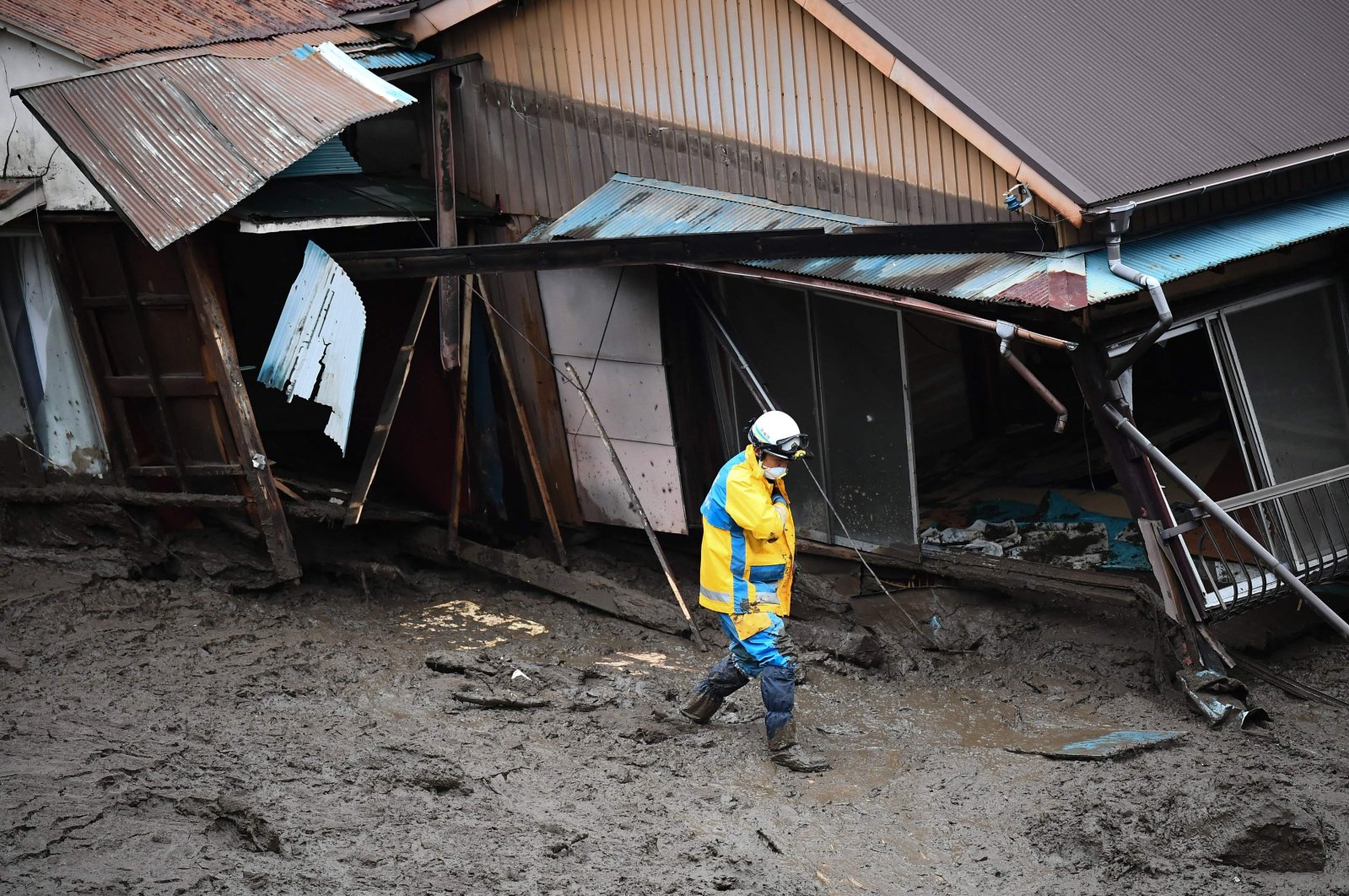 A police officer walks through the mud past a damaged building at the scene of a landslide in Atami, Shizuoka Prefecture, Japan, July 5, 2021. (AP Photo)
by Associated Press Jul 05, 2021 9:54 am
RECOMMENDED

Rescue workers continued their efforts on Monday to locate dozens of people unaccounted for in a massive landslide that hit a coastal Japanese resort town and killed three people.

Eighty people were still unaccounted for, according to Shizuoka prefectural disaster management official Takamichi Sugiyama. Officials were preparing to release their names in hopes of reaching some that might not have been caught in the landslide.

Initially, 147 of those people were unreachable, but that number was revised downward after city officials confirmed some had safely evacuated or were away when the disaster struck, it said.

The disaster is an added trial as authorities prepare for the Tokyo 2020 Olympics, due to start in less than three weeks, while Japan is still in the midst of the coronavirus pandemic.

At least 20 were initially described as missing. Adding to the confusion over casualties is that Atami is a vacation city, with many apartments and homes unoccupied for long parts of the year, their listed residents living in other places.

Others may be away visiting relatives or friends or not answering the phone, officials said. They hope to get in touch with more of those unaccounted for on Monday.

The landslide occurred Saturday after several days of heavy rains. Witnesses heard a giant roar as a small stream turned into a torrent, carrying black mud, trees, rocks and debris from buildings.

Bystanders were heard gasping in horror on cell phone videos taken as it happened.

Like many seaside and mountain towns in Japan, Atami is built on steep hillsides, its roads winding through bits of forest and heavy vegetation. With other parts of the country expecting heavy downpours in what is known as Japan's rainy season, authorities elsewhere were also surveying hillsides. NHK carried a program Monday about risk factors and warning signs that might precede a landslide.

Three coast guard ships and six military drones were backing up the hundreds of troops, firefighters and other rescue workers toiling in the rain and fog in search of possible survivors.

The mudslide struck Atami's Izusan neighborhood, known for its hot springs, a shrine and shopping streets. Atami is about 100 kilometers (60 miles) southwest of Tokyo.

Naoto Date, an actor who happened to be visiting the Izusan area after a filming session, woke up to sirens in the neighborhood when he was in his house, which is next to his mother's. Both of them were safe, but he made sure his mother walked to a nearby community center to evacuate, and he called all his friends and schoolmates and made sure they'd survived.

“I grew up here and my classmates and friends live here. I'm so sad to see my neighborhood where I used to play with my friends is now destroyed,” Date told The Associated Press (AP) in a video interview from his home in Atami.

Date said his friends all had safely evacuated and his mother moved to a hotel in a safer location. Date, who usually lives in Tokyo, said he was staying away from evacuation centers due to concern about the coronavirus.

Even though his house was located in a hazardous area, he said he never imagined it would be hit by a disaster.

“I used to take it not so seriously and I regret that,” he said. He filmed scenes in his neighborhood with muddy water gushing down and rescuers wading through knee-deep mud.

He also went to the sea where toppled cars were floating with debris from destroyed homes. “Many people saw their homes and belongings and everything washed away. They won't be able to return home, and it must require an unimaginable effort to recover."

Three people had been found dead as of early Monday, Fire and Disaster Management Agency and local officials said. Twenty-three people stranded by the mudslide were rescued, including three who were injured.

Shizuoka's governor, Heita Kawakatsu, told a news conference Sunday that construction upstream may have been a factor in the mudslide. Citing a preliminary examination by drone, Kawakatsu said massive amounts of soil that had been heaped up in the construction area had all washed down.

Kawakatsu said he will investigate. Media reports said a planned housing development was abandoned after its operator ran into financial problems.

The Izusan area is one of 660,000 locations in the country identified as prone to mudslides on a hazard map issued by the government but is not widely publicized and public awareness is low.

Early July near the end of a rainy season often is a time of deadly flooding and mudslides triggered by torrential rains, which many experts say are worsening due to global warming.