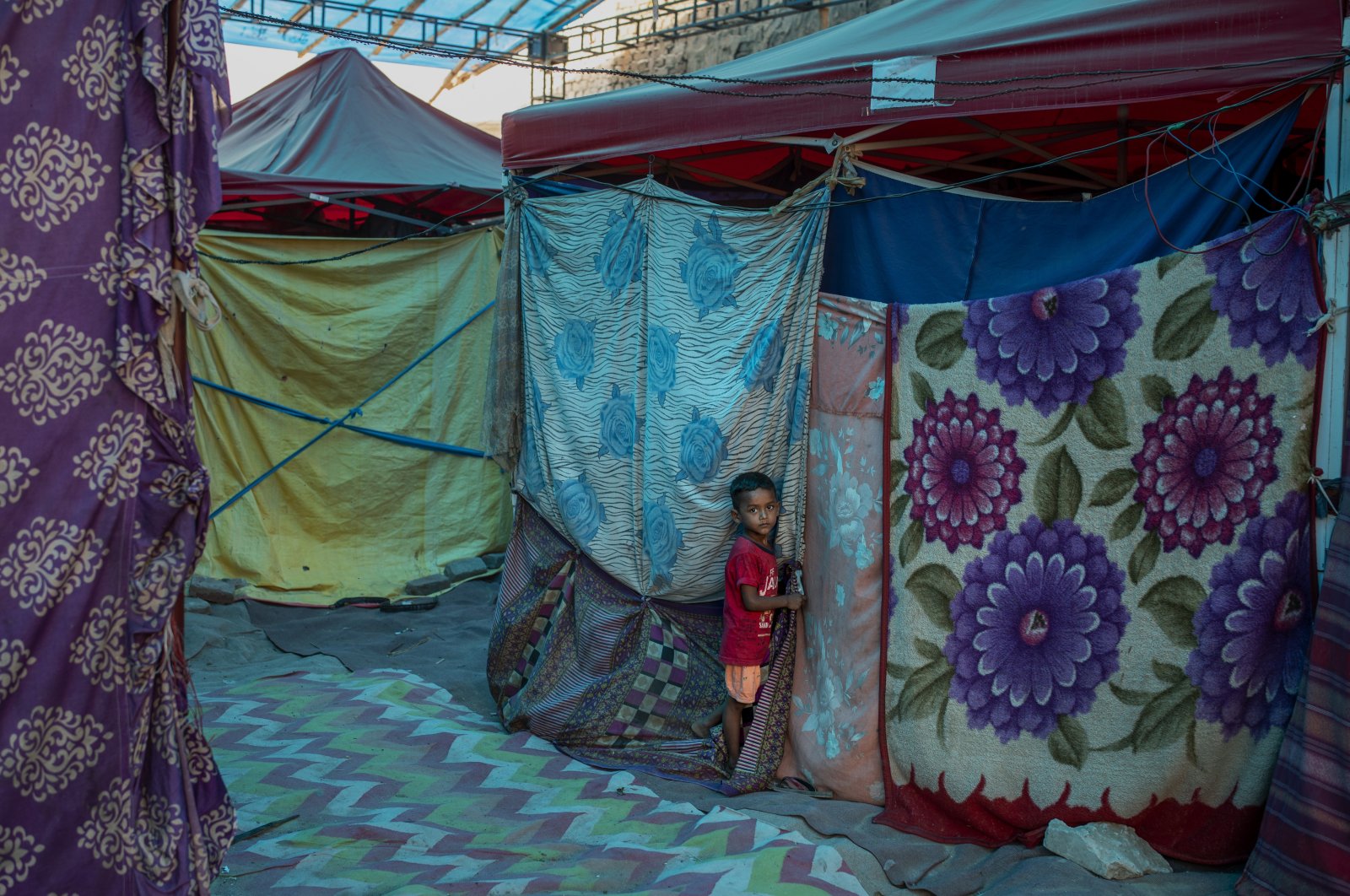 A young Rohingya refugee boy stands outside a tent at a refugee camp alongside the banks of the Yamuna River in the southeastern borders of New Delhi, India, July 1, 2021. (AP Photo)
by Anadolu Agency Aug 19, 2021 3:08 pm
RECOMMENDED

Testifying before a court in Argentina a Rohingya woman described the Myanmar military's genocide, painting a startling picture of the abuse suffered in Rakhine state, a rights body for the minority confirmed Wednesday.

The eyewitness, whose identity has been withheld for security reasons, is one of six Rohingya women treated inhumanely by the Myanmar military in their home country and are now living in cramped Bangladeshi camps. She virtually narrated her ordeal on Tuesday at the Federal Criminal Appeals Court in Buenos Aires, the Argentinian capital.

The Rohingya genocide has been separated into two phases, the first of which was a military campaign from October 2016 to January 2017, and the second of which has been ongoing since August 2017.

She testified in court about how the Myanmar military killed her husband and others in the states of Chuk Pyin and Rakhine.

"Soldiers killed hundreds of people. Some women were raped before being killed. The soldiers went on to rape many other women in their village and then burned their homes to the ground," she said.

Burmese Rohingya Organisation UK (BROUK), a U.K.-based Rohingya rights defender, filed a petition in November 2019 to open an investigation into the role of Myanmar's civilian and military leaders in committing genocide and crimes against humanity against the Rohingya, citing the principle of universal jurisdiction.

Crimes of this nature can be investigated anywhere in the world under the principle of universal jurisdiction, regardless of where they were committed.

"This is a historic moment for Rohingya brothers and sisters everywhere. We have been fighting for justice for the genocide against us for decades, but this is the first time anywhere in the world that a Rohingya has a chance to sit in person in front of a court of law, impartial and independent, to talk about the crimes against us," said BROUK chief Tun Khin.

Stressing that justice is the only way to break the cycle of violence in Myanmar, Khin said that the armed forces of Myanmar, officially known as the Tatmadaw, "must face the consequences of their murderous actions."

He, however, warned that the same military that tried to wipe out the Rohingya as a people is now in control of the country since the Feb. 1 coup.

"If the case is accepted by the Argentine judiciary, it will be the first universal jurisdiction case related to the situation of the Rohingya anywhere in the world," the statement added.

It would cover the full range of crimes committed entirely in Myanmar against the Rohingya, including mass murder, enforced disappearances, widespread torture, sexual violence and mass imprisonment, the statement noted.

Among those accused in the case are Min Aung Hlaing, the senior commander of the Myanmar military and ruling self-appointed prime minister of Myanmar, and other high-ranking military officials.

Tomas Ojea Quintana, a former U.N. special rapporteur on human rights in Myanmar, is serving as BROUK's legal counsel in the case.

Since August 2017, nearly 24,000 Rohingya Muslims have been killed, more than 34,000 thrown into fires, over 114,000 beaten and at least 18,000 Rohingya women and girls raped, according to a report by the Ontario International Development Agency (OIDA).

The Myanmar army's brutal crackdown in Rakhine state forced more than 750,000 Rohingya refugees, mostly women and children, to flee to Bangladesh, pushing the persecuted community's number in Bangladesh above 1.1 million, according to Amnesty International.