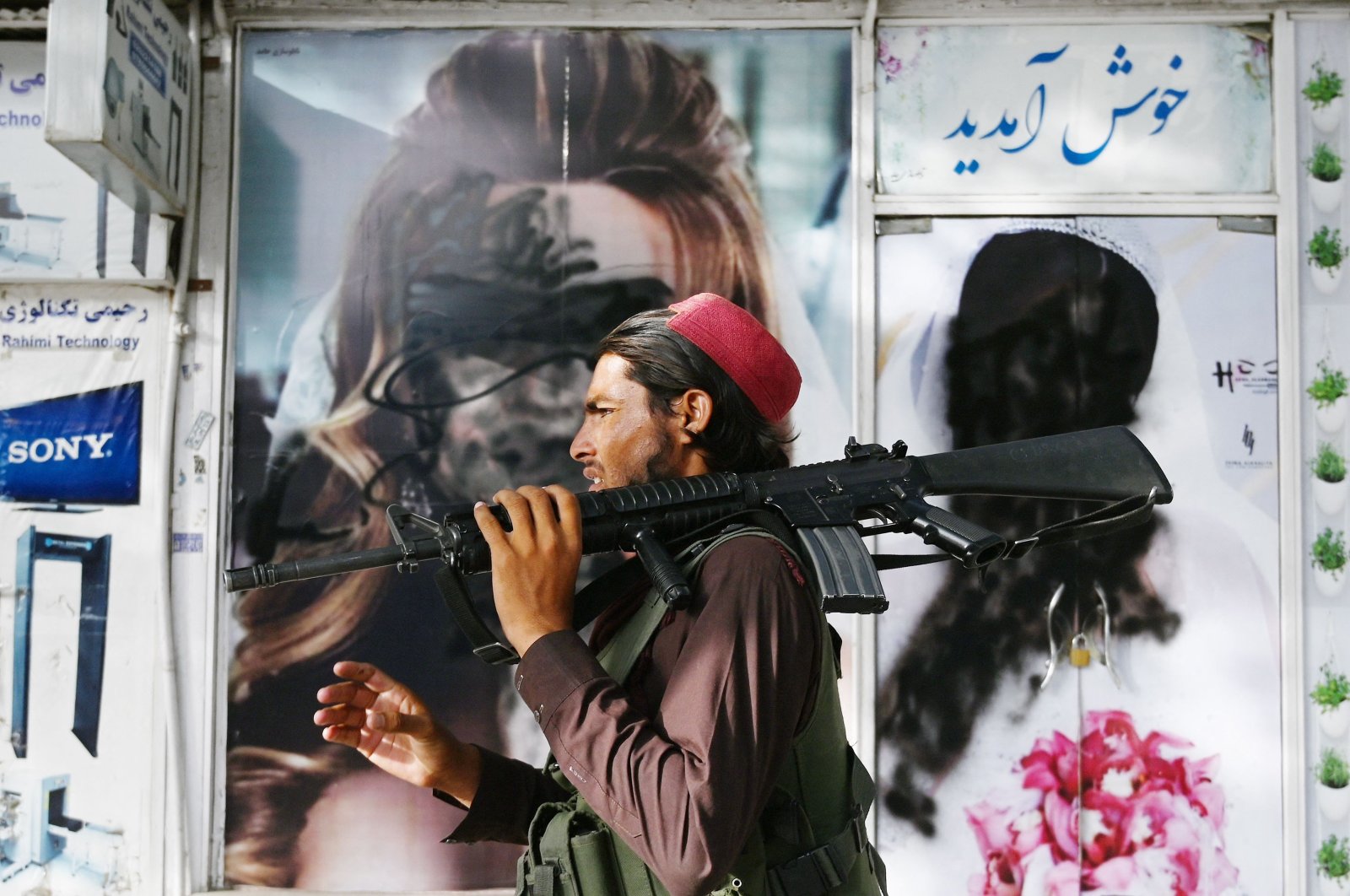 A Taliban fighter walks past a beauty salon with images of women defaced using spray paint in Shar-e-Naw in Kabul, Afghanistan, on Aug. 18, 2021. (AFP Photo)
by REUTERS Aug 18, 2021 7:14 pm
RECOMMENDED

A council of scholars will ultimately determine the role of women in Afghanistan, a senior Taliban leader shared. The scholars will decide how women should dress and whether they have the right to work and education among other things.

"Our ulema (scholars) will decide whether girls are allowed to go to school or not," Waheedullah Hashimi, who has access to the group's decision-making, told Reuters.

"They will decide whether they should wear hijab, burqa, or only (a) veil plus abaya or something, or not. That is up to them."

The hijab is usually a scarf covering the head, the burqa is an all-enveloping robe while the abaya is a robe that leaves the face uncovered.

On Tuesday, the Taliban's main spokesperson, Zabihullah Mujahid, told a news conference in Kabul that women would be allowed to work and study and "will be very active in society but within the framework of Islam."

During their 1996-2001 rule, the Taliban stopped women from working. Girls were not allowed to go to school and women had to wear burqas to go out, and then only when accompanied by a male relative.

Those who broke the rules sometimes suffered humiliation and public beatings by the Taliban's religious police.

Western leaders have said they will judge the new Taliban by their actions, including how they treat girls and women.

"We will judge this regime based on the choices it makes, and by its actions rather than by its words, on its attitude to terrorism, to crime and narcotics, as well as humanitarian access, and the rights of girls to receive an education," British Prime Minister Boris Johnson said on Wednesday.

"People in Afghanistan 99.99% are Muslims and they believe in Islam," Hashimi said. "When you believe in laws, definitely you should apply that law. We have a council, a very prominent council of Ulema. They will decide what to do."

Despite its surge across Afghanistan in recent weeks, Hashimi said even the Taliban had not expected to enter Kabul so soon. But chaos ensued in the capital after President Ashraf Ghani fled the country, he said.

"Therefore our leadership ordered our Taliban to Kabul city. There was no one to resist. No one at all. So we entered and everything was laid kind of empty. So we occupied and now we are in control of Kabul city."