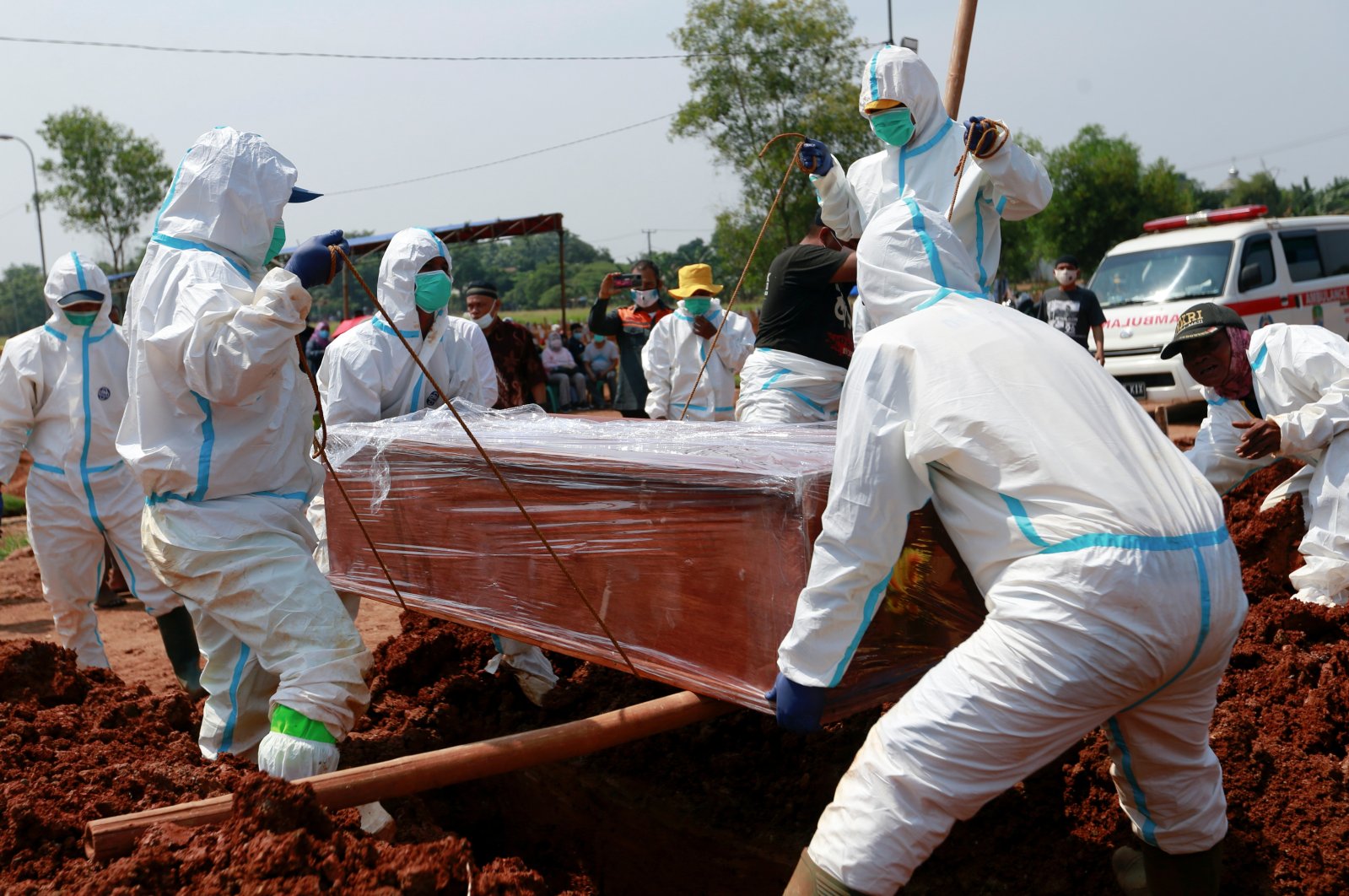 Gravediggers wearing personal protective equipment (PPE) bury a coffin at a Muslim burial area provided by the government for coronavirus victims in Bekasi, on the outskirts of Jakarta, Indonesia, July 8, 2021. (Reuters Photo)
by REUTERS Jul 09, 2021 8:58 am
RECOMMENDED

Having escaped the worst when the coronavirus pandemic erupted last year, Southeast Asia is now suffering record rises in deaths and cases, while vaccination shortfalls and highly contagious variants have derailed containment efforts.

As countries like Britain, Germany and France prepare to remove most remaining restrictions after devastating outbreaks, governments in Southeast Asia have been tightening measures, hoping targeted lockdowns will act as circuit-breakers in arresting dramatic spikes after cases started rising in May.

Indonesia, the region's hardest-hit and most populous country, recorded 38,391 cases Thursday, six times the number a month earlier, in a week when its daily death toll as much as doubled from the start of July. Hospitals on the most populous island Java are being pushed to the limit, oxygen supplies are low, and four of five designated COVID-19 burial grounds in the capital Jakarta are close to full.

Record deaths were reported Thursday in Malaysia, and in Thailand, where authorities proposed internal travel curbs as the delta variant wreaking havoc in Indonesia spread quickly in and around Bangkok. A new terminal at the Thai capital's airport is being turned into a 5,000-bed field hospital.

Neighboring Myanmar saw more than 4,000 new cases for the first time Thursday and one of its deadliest days, while Cambodia has seen its highest number of cases and deaths in the past nine days. Health experts say a low level of testing in the region's most populous countries Indonesia and the Philippines is also likely disguising the full extent of outbreaks, while Myanmar has seen a collapse in testing since February's military coup.

Vietnam's reputation as a coronavirus success story is under threat, with more cases in the past three days than during the first 13 months of the pandemic, although the record 1,314 cases Thursday were a fraction of those in Indonesia. Fears of a lockdown prompted supermarket panic-buying this week in the epicenter Ho Chi Minh City, and a 4% plunge in its main stock index Tuesday. The capital Hanoi halted public transport from places with infection clusters, to insulate itself from the outbreak in the southern commercial hub, where some of the country's tightest restrictions were in force from Friday.

Dicky Budiman, an epidemiologist at Griffith University, said the region was struggling to cope with the delta variant and were paying for inconsistencies in strategy and messaging, and enforcement of protocols. He also cited the need to broaden the range of vaccines to better protect populations, noting the dominance of the Sinovac vaccine, owing to China's vaccine diplomacy when western brands were unavailable.

Vaccination rates remain low, with 5.4% of Indonesia's 270 million population fully inoculated, about 2.7% of people in the Philippines and 4.7% of the population in Thailand.

Malaysia has vaccinated 9.3% of its 32 million people and has introduced an enhanced lockdown in its capital and industrial belt. Indonesia and Thailand are considering booster shots with messenger RNA (mRNA) vaccines, like those of Moderna and Pfizer-BioNTech/Cominarty, for medical workers who have mostly received the Chinese-made inactivated virus vaccines of Sinovac, amid concerns about their resistance to variants.

Singapore is among the few bright spots, with authorities expected to further ease restrictions imposed when the delta variant was detected, and complete the immunization of half of the population later this month. The city-state plans to allow fully vaccinated residents to attend larger gatherings like concerts, conferences and sports events.