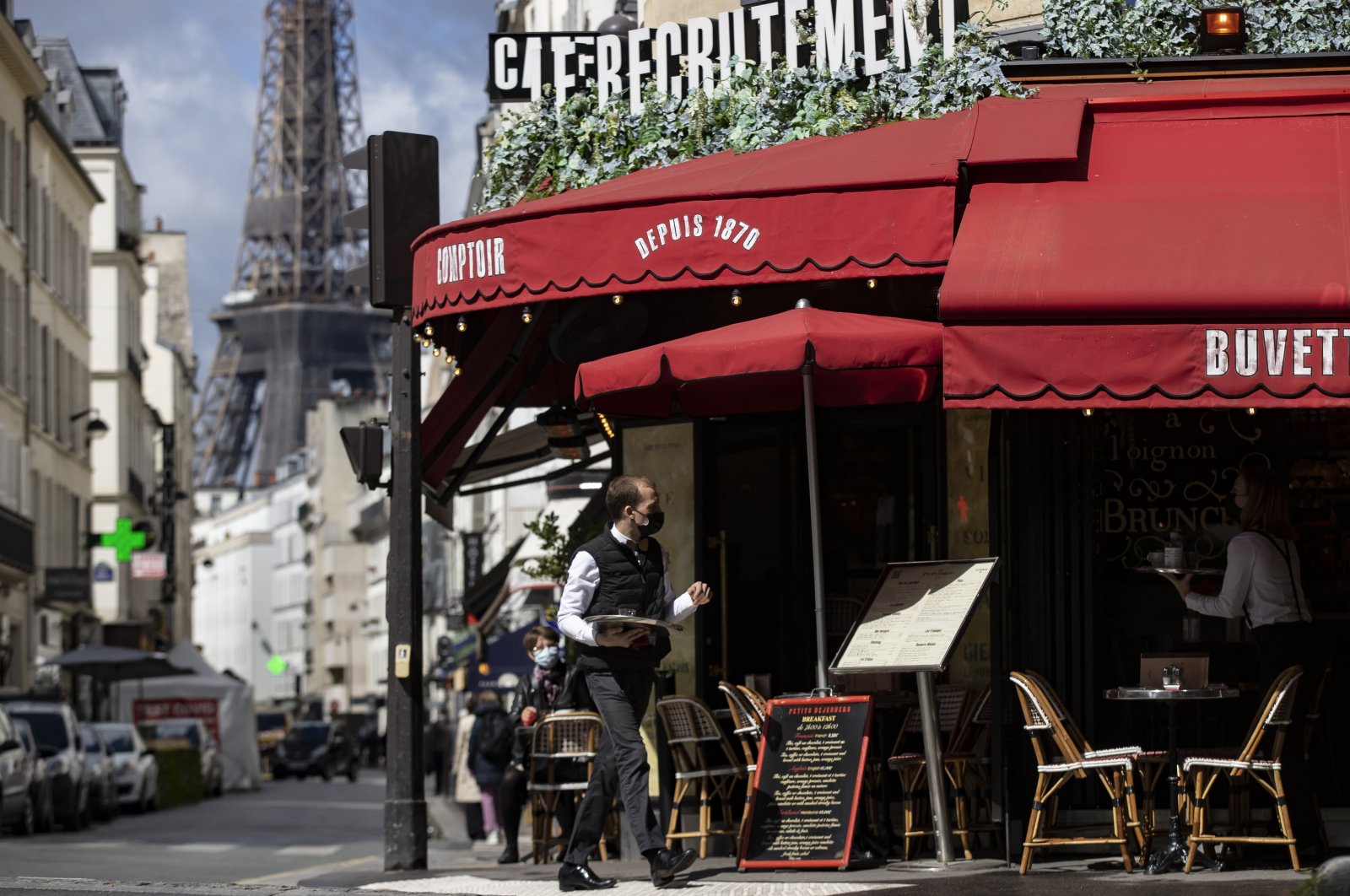 A waiter serves beverages on a cafe's terrace near the Eiffel Tower during the reopening of restaurant terraces and bars, Paris, France, May 19, 2021. (EPA-EFE Photo)
by Agencies Jun 09, 2021 11:47 am
RECOMMENDED

France and Belgium are gearing up to return to "normal life" by further easing their pandemic-related measures Wednesday, allowing restaurants and cafes to serve customers indoors, while the United States eased travel warnings for dozens of countries.

The coronavirus pandemic's impact on life around the planet was also illustrated Wednesday with a shake-up of the list of the world's most livable cities, with Auckland rocketing to the top on the back of New Zealand's successful COVID-19 response.

With more than 3.7 million lives lost globally, many nations are still struggling to contain their COVID-19 outbreaks, but the rapid vaccine rollout in wealthier parts of the world such as Europe is allowing the return of some activities considered unthinkable just a few months ago.

"A new step will be taken" Wednesday, French President Emmanuel Macron wrote on Twitter when people in France will be able to enjoy outdoor dining and staying out until 11 p.m. "Life will resume across our lands," he said. If all goes to plan, French authorities will drop the overnight curfew entirely on June 30. In virtually all of France, however, masks remain obligatory, even outdoors.

Belgium will also relax restrictions, allowing cafes and restaurants to serve indoors. Prime Minister Alexander De Croo announced longer operating hours for businesses and the easing of restrictions on sports venues and cinemas. European nations are ramping up vaccinations as they try to strike a balance between public health and reviving sectors such as tourism that were devastated by pandemic travel restrictions.

The hopeful outlook in Europe is a far cry from the early days of the pandemic when it was one of the worst-hit regions in the world. The impact of that phase was visible in the world's most livable cities list released Wednesday, which saw cities in Australia, Japan and New Zealand – all with relatively swift coronavirus responses – leaping ahead of those in Europe.

"Auckland rose to the top of the ranking owing to its successful approach in containing the COVID-19 pandemic, which allowed its society to remain open and the city to score strongly," said the Economist Intelligence Unit, which compiles the list. It cited the stress on health infrastructure for the poor showing of European cities, which also had a knock-on effect on culture and overall livability because of restrictions on movement. In contrast, "European cities fared particularly poorly in this year's edition."

"Vienna, previously the world's most livable city between 2018-20, fell to 12th. Eight of the top 10 biggest falls in the rankings are European cities," according to the study.

The biggest fall overall among the European cities was the port city of Hamburg in northern Germany, which fell 34 places to 47th.

The trend was motivated by a "stress on hospital resources" which the study said increased for most German and French cities and resulted in a "deteriorated health care score."

Pressure on European health systems also had a knock-on effect on culture and overall livability because of restrictions on movement, the Economist said, according to remarks carried by Agence France-Presse (AFP).

The most notable rise was recorded by Honolulu, Hawaii, in the United States, which came 14th in the ranking and moved up 46 places because of its containment of the pandemic and fast vaccination program. Damascus remains the city where life is most difficult because of Syria's ongoing civil war.

The return of gigs

The U.S. Tuesday eased its warnings against travel to dozens of countries including Olympics host Japan and much of Europe, with the State Department asking Americans to reconsider travel but ending blanket advice to not go at all. The U.S. has had one of the most successful vaccine rollouts in the world, and President Joe Biden has set a goal of giving at least one shot to 70% of American adults by July 4 – a goal still within reach but imperiled by hesitancy.

That challenge has been illustrated in Texas, where more than 100 employees of one of the largest hospitals in the state are suing their employer after it said it would fire them for failing to get vaccinated against COVID-19. The vaccines in use in the U.S. have been declared safe and given to more than 170 million people, allowing dramatic easing of curbs in many parts including New York City where huge music concerts and shows are set to return.

Bruce Springsteen announced Monday that his hit Broadway show will return on June 26, in front of vaccinated audiences. And on June 20, the famous Madison Square Garden will host a vaccinated crowd of thousands for a Foo Fighters gig, the first capacity concert at a New York arena since the virus struck last year.

"We've been waiting for this day for over a year," said the rock band's frontman Dave Grohl. "And Madison Square Garden is going to feel that HARD."

Meanwhile, Australia's second-largest city Melbourne will exit a COVID-19 hard lockdown Thursday night as planned, Victorian state authorities said, although some restrictions on travel and gatherings would likely remain for another week.

After two weeks in a strict lockdown that forced people to remain home except for essential business, Melbourne's 5 million residents will get more freedom to step outside from 11:59 p.m. local time (1 p.m. GMT) Thursday.

However, people must stay within 25 kilometers (15 miles) of their homes, officials said, in an effort to stop transmission during an upcoming long weekend. There will also be a total ban on house gatherings and masks will be mandatory indoors.

"This is a good day," Victorian state Acting Premier James Merlino told reporters in Melbourne Wednesday. "But we know this isn't over yet and until we have widespread vaccination across Victoria and the country, the virus will still be with us."

According to Reuters, Merlino said the further easing of restrictions for Melbourne could happen within a week barring any spike in cases.

A 44-year-old woman tested positive in Queensland state, authorities said Wednesday, after driving from Victoria, through New South Wales, earlier this month. Authorities said there was no immediate evidence of community transmission and no new restrictions on residents have been issued.

Queensland's state capital of Brisbane last went into a snap lockdown in late March to contain an outbreak that was quickly suppressed.

Victoria has endured four lockdowns since the pandemic began, the longest more than 100 days late last year, and the state has seen more than 800 deaths, 90% of the national toll.

Daily cases have remained in single digits on most days of the lockdown and cases were all linked to the highly infectious Delta virus variant found among cases late last week that raised concerns of a possible spike in infections.