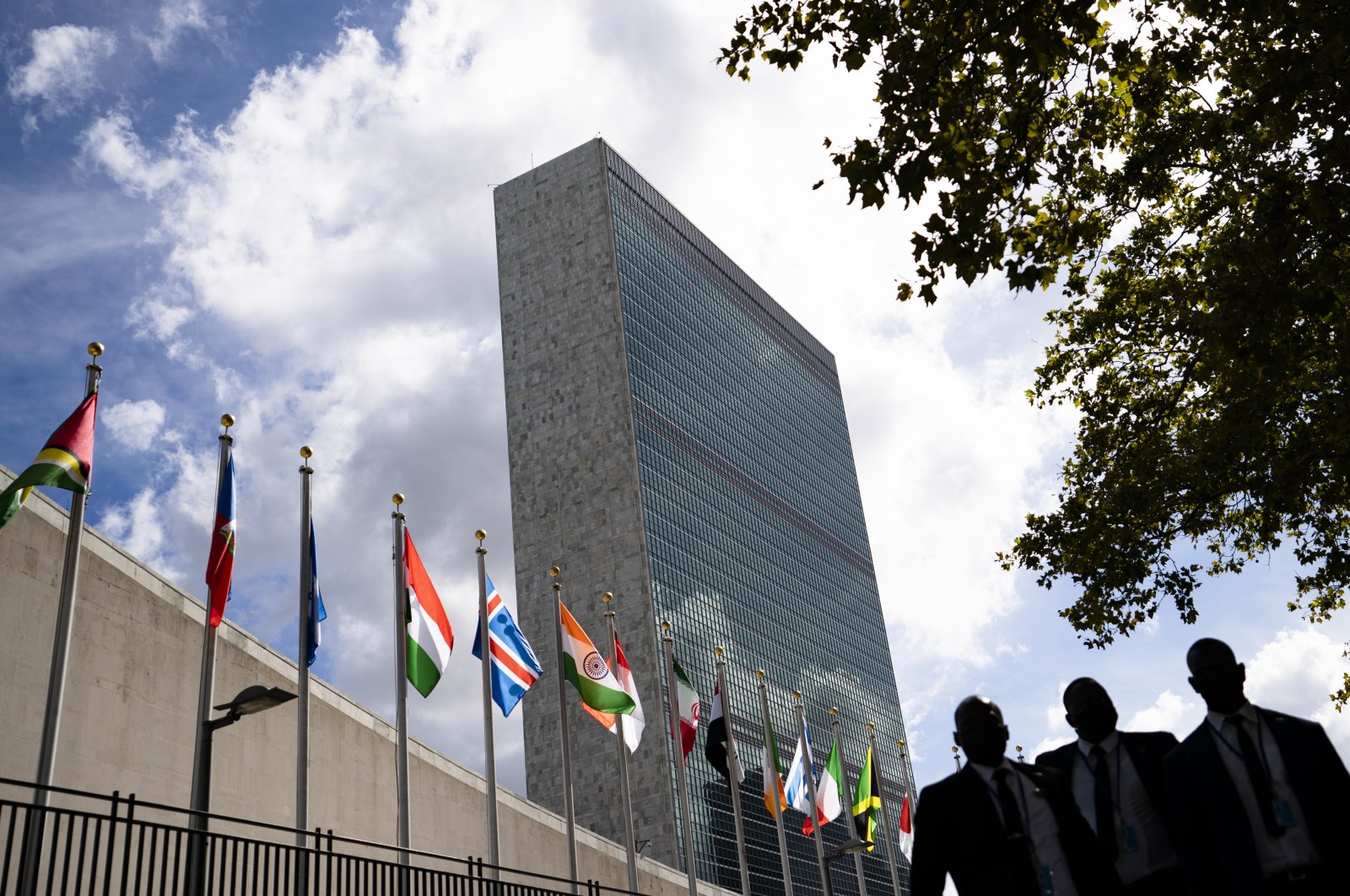 Members of a delegation's entourage wait outside a security checkpoint on the sidewalk in front of the U.N. headquarters, during the 76th Session of the U.N. General Assembly in New York, U.S., Sept. 21, 2021. (AP Photo)
by ASSOCIATED PRESS Sep 22, 2021 8:35 am
RECOMMENDED

The Taliban, who are now in de facto control of Afghanistan, want to address the United Nations General Assembly’s high-level meeting of world leaders this week, the international body said.

The question now facing U.N. officials comes just over a month after the Taliban, ejected from Afghanistan by the United States and its allies after 9/11, swept back into power as U.S. forces prepared to withdraw from the country at the end of August. The Taliban stunned the world by taking territory with surprising speed and little resistance from the U.S.-trained Afghan military. The Western-backed government collapsed on Aug. 15.

Five days later, Guterres received another communication with the letterhead “Islamic Emirate of Afghanistan, Ministry of Foreign Affairs,” signed by “Ameer Khan Muttaqi” as “Minister of Foreign Affairs,” requesting to participate in the U.N. gathering of world leaders.

Muttaqi said in the letter that former Afghan President Ashraf Ghani was “ousted” as of Aug. 15 and that countries across the world “no longer recognize him as president,” and therefore Isaczai no longer represents Afghanistan, Dujarric said.

The Taliban said it was nominating a new U.N. permanent representative, Mohammad Suhail Shaheen, the U.N. spokesperson said. He has been a spokesperson for the Taliban during peace negotiations in Qatar.

Senior U.S. State Department officials said they were aware of the Taliban’s request – the U.S. is a member of the U.N. credentials committee – but they would not predict how that panel might rule. However, one of the officials said the committee “would take some time to deliberate,” suggesting the Taliban’s envoy would not be able to speak at the General Assembly at this session at least during the high-level leaders’ week.

In cases of disputes over seats at the U.N., the General Assembly’s nine-member credentials committee must meet to make a decision. Both letters have been sent to the committee after consultations with General Assembly President Abdulla Shahid's office. The committee's members are the U.S., Russia, China, Bahama, Bhutan, Chile, Namibia, Sierra Leone and Sweden.

Afghanistan is scheduled to give the last speech on the final day of the high-level meeting on Sept. 27. It wasn't clear who would speak if the committee met and the Taliban were given Afghanistan's seat.

When the Taliban last ruled from 1996 to 2001, the U.N. refused to recognize their government and instead gave Afghanistan’s seat to the previous, warlord-dominated government of President Burhanuddin Rabbani, who eventually was killed by a suicide bomber in 2011. It was Rabbani’s government that brought Osama bin Laden, the mastermind of 9/11, to Afghanistan from Sudan in 1996.

The Taliban have said they want international recognition and financial help to rebuild the war-battered country. But the makeup of the new Taliban government poses a dilemma for the U.N. Several of the interim ministers are on the U.N.’s so-called blacklist of international terrorists and funders of terrorism.

Credentials committee members could also use Taliban recognition as leverage to press for a more inclusive government that guarantees human rights, especially for girls who were barred from going to school during their previous rule, and women who weren't able to work.