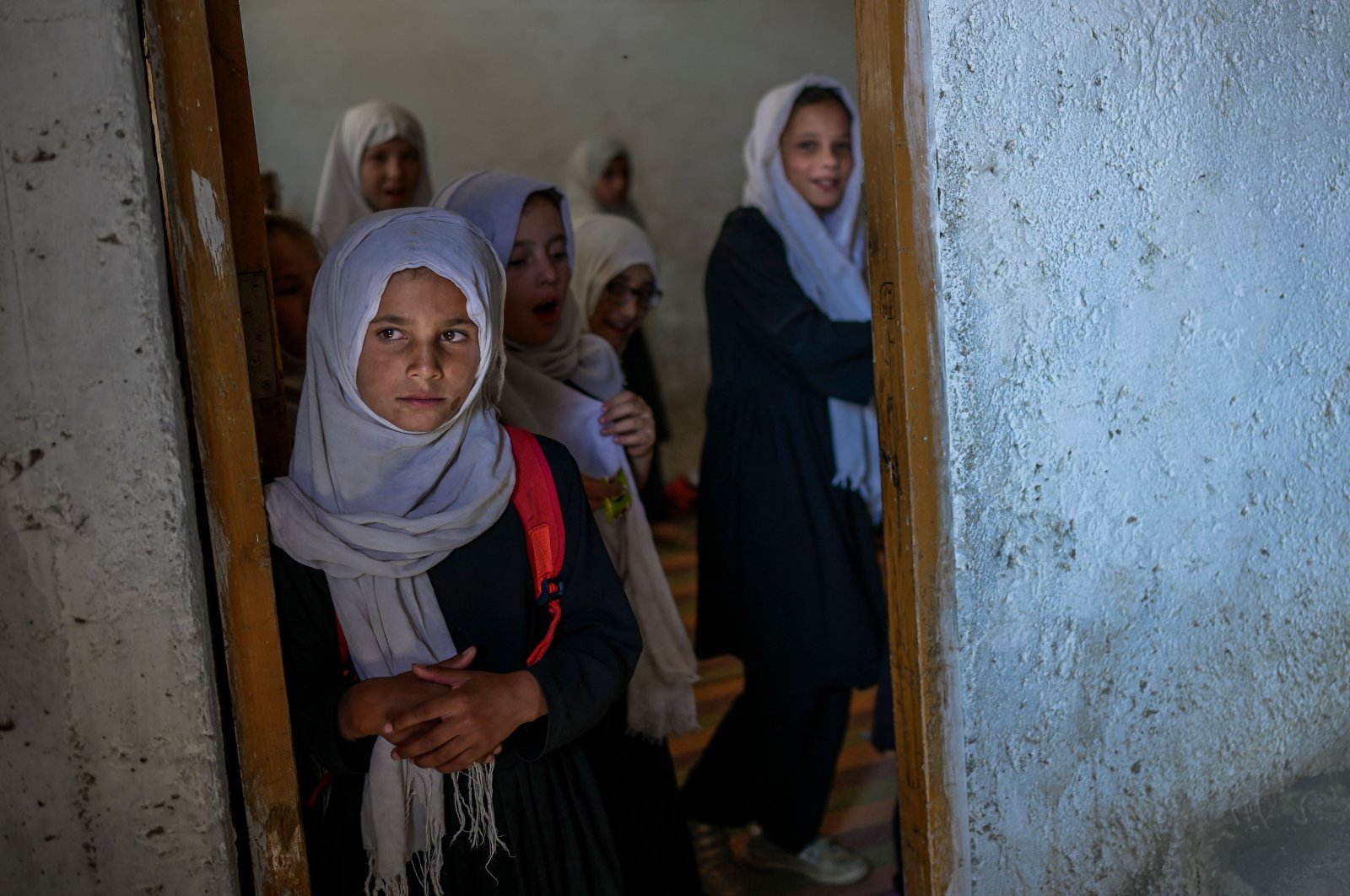 Schoolgirls gather at their class after arriving at a gender-segregated school in Kabul, Afghanistan, Sept. 15, 2021. (AFP Photo)
by French Press Agency - AFP Sep 18, 2021 11:09 am
RECOMMENDED

Afghanistan's new Taliban government excluded girls from returning to secondary school Saturday, allowing only boys and male teachers to go back to the classrooms.

The Taliban ousted the U.S.-backed government last month, promising a softer brand of rule than their repressive reign in the 1990s, when women were mostly banned from education and work.

But the diktat from the education ministry was the latest move from the new government to threaten women's rights.

"All male teachers and students should attend their educational institutions," a statement said ahead of classes resuming Saturday.

The statement, issued late Friday, made no mention of women teachers or girl pupils.

Secondary schools, with students typically between the ages of 13 and 18, are often segregated by sex in Afghanistan. During the COVID-19 pandemic, they have faced repeated closures and have been shut since the Taliban seized power.

Since a U.S.-led invasion ousted the Taliban in 2001, significant progress had been made in girls' education, with the number of schools tripling and female literacy nearly doubling to 30% – however, the change was largely limited to the cities.

The United Nations said it was "deeply worried" for the future of girls' schooling in Afghanistan.

"It is critical that all girls, including older girls, are able to resume their education without any further delays. For that, we need female teachers to resume teaching," the U.N. children's agency UNICEF said.

Primary schools have already reopened, with boys and girls mostly attending separate classes and some women teachers returning to work.

The new regime has also permitted women to go to private universities, though with tough restrictions on their clothes and movement.

In a further sign that the Taliban's approach to women and girls has not softened, they appeared to have shut down the government's ministry of women's affairs and replaced it with a department notorious for enforcing strict societal rules during their first reign.

In Kabul on Friday, workers were seen raising a sign for "the ministry for the promotion of virtue and prevention of vice" at the old Women's Affairs building in the capital.

Videos posted to social media showed women workers from the ministry protesting outside after losing their jobs.

No official from the Taliban responded to requests for comment.

Although still marginalized, Afghan women have fought for and gained basic rights in the past 20 years, becoming lawmakers, judges, pilots and police officers.

Hundreds of thousands have entered the workforce – a necessity in some cases as many women were widowed or now support invalid husbands as a result of decades of conflict.

The Taliban have shown little inclination to honor those rights – no women have been included in the government, and many have been stopped from returning to work.