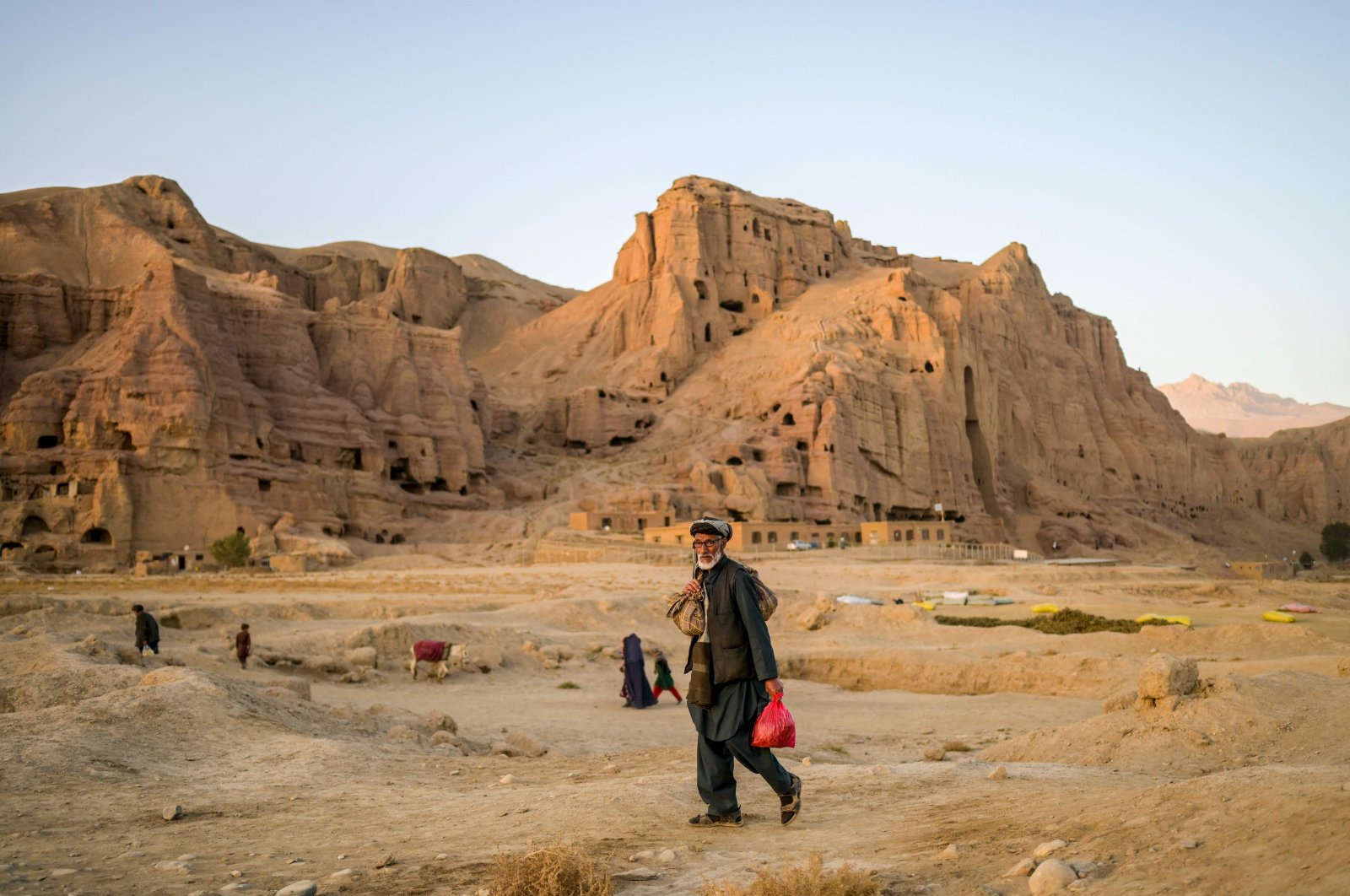 A Hazara man walks home near the cliffs pockmarked by caves where people still live as they did centuries ago in Bamiyan, Afghanistan, Oct. 3, 2021. (AFP Photo)
by DAILY SABAH WITH AGENCIES
Oct 05, 2021 8:53 am

The Taliban carried out 'cold-blooded executions' of members of the Hazara ethnic group, killing at least 13, including former government forces in a recent wave of horrific violence, a new report by Amnesty International reveals

Taliban forces unlawfully killed 13 ethnic Hazaras, most of them Afghan soldiers who had surrendered to the insurgents, a prominent rights group said Tuesday.

The killings took place in the village of Kahor in Daykundi province in central Afghanistan on Aug. 30, according to an investigation by Amnesty International. Eleven of the victims were members of the Afghan national security forces and two were civilians, among them a 17-year-old girl.

The reported killings took place about two weeks after the Taliban took control of Afghanistan in a blitz campaign, culminating in their takeover of Kabul. At the time, Taliban leaders sought to reassure Afghans that they had changed from their previous harsh rule of the country in the late 1990s.

The world has been watching whether the Taliban would live up to their initial promises of tolerance and inclusiveness toward women and ethnic minorities, among them the Shiite Hazaras. However, Taliban actions so far, such as renewed restrictions on women and the appointment of an all-male government, have been met with dismay by the international community.

The Taliban doubled down on their hard-line trajectory Monday in a third round of Afghanistan government appointments that encompassed a host of men named to deputy positions, a spokesperson said. None of the 38 new appointments announced by chief spokesperson Zabihullah Mujahid were women. They were comprised of members drawn entirely from the Taliban with little representation of minority groups. Also included were appointments to humanitarian organizations.

The appointments were the latest indication the Taliban government has no intention of heeding conditions from the international community that formal recognition of their rule would depend on their treatment of women and minority groups. Among the new appointments was a political deputy for the prime minister, deputy ministers and deputy head of the Afghan Red Crescent Society. Most of the positions consisted of army and defense ministry commanders and deputies across Afghanistan's provinces including Kabul, Helmand, Herat and Kandahar.

The Hazara ethnic group makes up around 9% of Afghanistan’s 36 million people. Amnesty's secretary general, Agnes Callamard, said that "these cold-blooded executions (of the Hazaras) are further proof that the Taliban are committing the same horrific abuses they were notorious for during their previous rule of Afghanistan."

The rights group said Sadiqullah Abed, the Taliban-appointed chief of police for Daykundi, denied any killings had happened and only said that a member of the Taliban had been wounded in an attack in the province.

The Taliban took control of Daykundi province on Aug. 14, according to the Amnesty report, and an estimated 34 former soldiers sought safety in Khidir district. The soldiers, who had government military equipment and weaponry with them, agreed to surrender to the Taliban.

Mohammad Azim Sedaqat, who led the group’s surrender, arranged to decommission the weapons in the presence of Taliban members. On Aug. 30, an estimated 300 Taliban fighters arrived in a convoy close to Dahani Qul village, where the security forces members were staying, some with family members, according to Amnesty’s report.

As the security forces attempted to leave the area with their families, Taliban fighters caught up with them and opened fire on the crowd, killing a 17-year-old girl named Masuma.

One soldier fired back, killing a Taliban fighter and wounding another. The Taliban continued to shoot as the families fled, killing two soldiers, according to the report.

After nine security forces surrendered, the Taliban took them to a nearby river basin and killed them, according to the rights group. Amnesty said it verified photographs and video evidence taken in the aftermath of the killings.

A former member of the province's parliament Raihana Azad described the events as “inhumane mass killings” by the new Afghan rulers. Azad said the Aug. 30 murder direct violated the claims of the Taliban of general amnesty of all former Afghan servicepeople and government workers.

During their five-year rule in the 1990s, the Taliban faced accusations of murdering hundreds of Hazara in the provinces of Balkh and Bamiyan.

Zaman Sultani, South Asia researcher at Amnesty International, said the recent massacres in Daykundi are a continuation of a series of illegal killings by the group. He cited the statements that interviewees attributed to a senior Taliban official as proof: “I have killed people for the past 20 years. Killing is easy for me. I can kill again,” the official reportedly told Daykundi residents.

The Taliban's atrocities did not end in Daykundi, as thousands of people were forced to leave their houses in the Gizab and Pato districts on Aug. 14, just a day before former Afghan President Ashraf Ghani escaped the capital of Kabul, leaving citizens in the hands of the unpredictable Taliban. Some 20,000 families from at least 10 villages were forcibly displaced over the last month and a half.

“If it was just one village it may be possible that these were some kind of legal issues, but it doesn’t make sense that there are land disputes all across this many villages,” Azad told Doha-based Al-Jazeera. “Without their homes and lands, these people have no financial means to move anywhere else, so they’re just left to live in tents in fields.”

The forced displacement also took place in the Northern province of Kunduz. Human Rights Watch (HRW) said in a July report that the Taliban forced at least 400 families to flee their homes.

“The forced displacement of civilians is unlawful unless required for the security of the affected civilians or is absolutely necessary for military reasons. Retaliatory attacks are a form of collective punishment and are also prohibited,” Patricia Gossman, associate Asia director at HRW told Al-Jazeera.

The fears of further escalation in Afghanistan amid reports of human rights abuses keep the international community hesitant to recognize the Taliban's self-appointed government as legitimate and to begin cooperating with it.

France's President Emmanuel Macron said Tuesday the forthcoming G-20 summit must send a clear message to Afghanistan's Taliban about the conditions for its international recognition.

In an interview with France Inter radio station broadcast on Tuesday, Macron said those conditions must include equality for women, access for foreign humanitarian operations and noncooperation with terrorist groups.

"I believe international recognition should have a price, and the dignity of Afghan women, equality between men and women, should be one of the points on which we insist, and should be a condition for us," Macron said, according to Reuters.

Referring to the G-20 summit due to take place in Rome later this month, Macron said: "We will talk about Afghanistan. We absolutely must, that's to say us, the Europeans, the Americans, China, Russia, the big powers of Africa, Asia, the Pacific, and Latin America all together, we must have a very clear message that we will set conditions for recognition of the Taliban."

The Taliban seek international support as they grapple with the daunting challenges of an economy on the brink of collapse, drought and a growing security threat from the Daesh terrorist group.

Since the group took control of Afghanistan, the World Bank and the International Monetary Fund (IMF) have paused disbursements to Kabul. The U.S. froze billions of dollars in assets held in U.S. accounts by Afghanistan's central bank. Foreign aid previously accounted for nearly 75% of Afghanistan’s public expenditure, according to a World Bank report. Without those funds, the Taliban are unable to pay public sector salaries, precipitating a spiraling economic crisis.