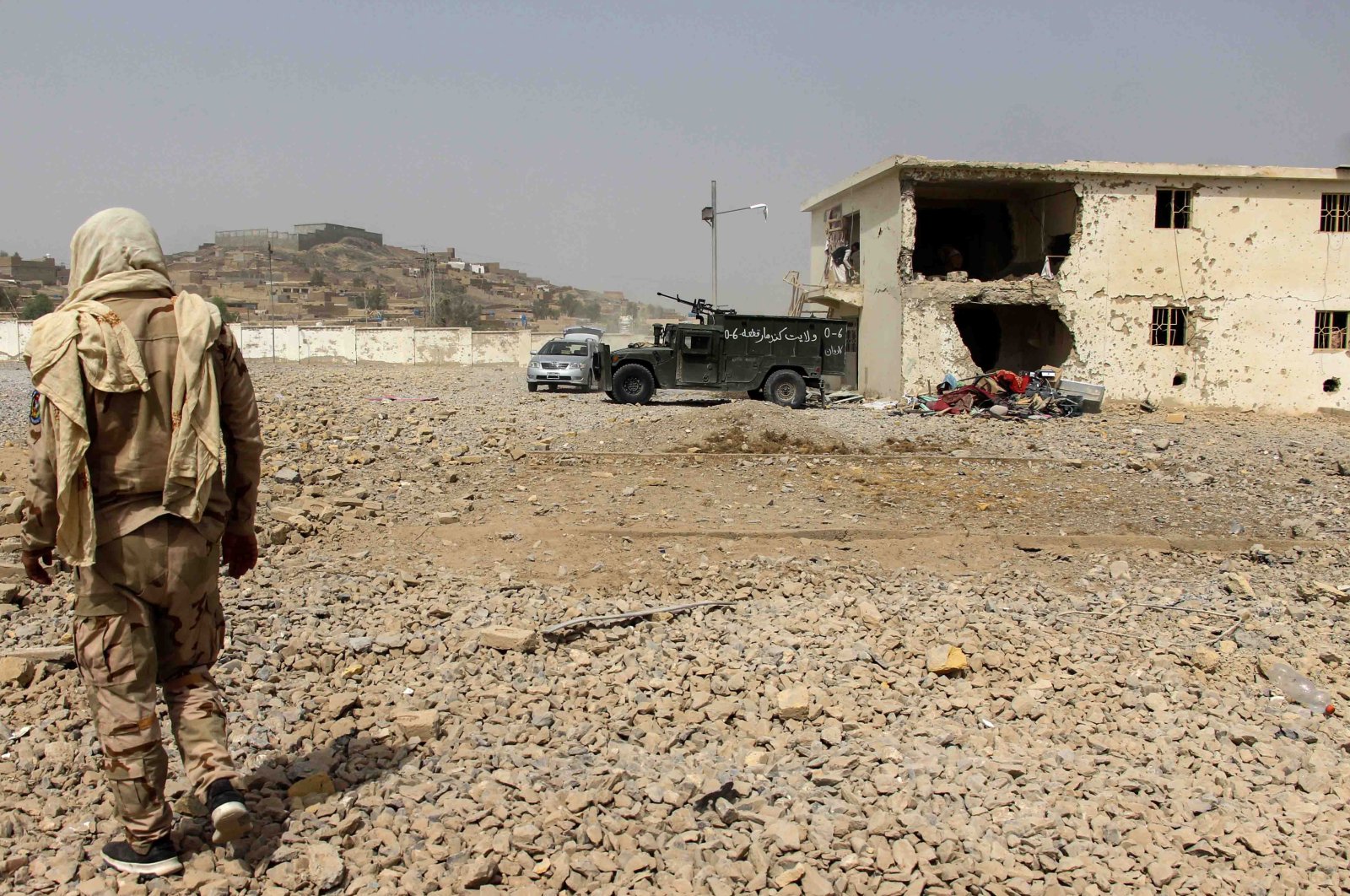 The Taliban held talks with the Afghan government in Tehran, while the insurgent group's militants stage a major assault on provincial capital Qala-e-Naw

The Taliban Wednesday continued its efforts to seize power in the vacuum left by the United States military’s final withdrawal from Afghanistan, as the insurgents launched a massive assault on a provincial capital city.

Fierce fighting erupted in the western city of Qala-e-Naw, the capital of Badghis, with the militants seizing police headquarters and offices of the country's spy agency.

Afghanistan's Defense Minister Bismillah Khan said government forces were in a "very sensitive military situation," adding that "the war is raging" with the Taliban.

The onslaught came just hours after Washington announced U.S. forces on the ground had completed more than 90% of their withdrawal from Afghanistan and as the Kabul government held talks with Taliban representatives in neighboring Iran.

The militants have waged a dizzying campaign across Afghanistan since U.S. and NATO forces announced the final withdrawal from the country in early May, seizing dozens of rural districts and stirring fears that the government is in crisis.

"The enemy has entered the city, all the districts have fallen," Badghis governor Hessamuddin Shams told reporters in a text message, according to Agence France-Presse (AFP)

"The provincial council officials have fled to an army camp in the city. Fighting continues in the city," added Badghis provincial council member Zia Gul Habibi. She said the Taliban had entered the city's police headquarters and the local office of the country's spy agency, the National Directorate of Security.

In a separate video message sent to reporters, Shams attempted to calm the residents of the city, even as he appeared armed with a rifle with gunfire rattling in the distance. "My message is please keep your calm. I assure you that we will, all of us, together defend the city," he said.

As news of the attack spread, social media was flooded with videos of the fight for the city, with some videos showing armed Taliban fighters on motorbikes entering Qala-e-Naw as onlookers cheered.

The fight for the city coincided with a high-level summit across the border in Iran, where an Afghan delegation met with Taliban representatives in Tehran, according to the Iranian foreign ministry. Opening the Tehran talks, Iran's Foreign Minister Mohammad Javad Zarif welcomed the U.S. departure from its eastern neighbor but warned, "Today the people and political leaders of Afghanistan must make difficult decisions for the future of their country."

Last week, all U.S. and NATO forces left Bagram Air Base near Kabul – the command center for anti-Taliban operations – effectively wrapping up their exit after 20 years of military involvement that began in the wake of the 9/11 terrorist attacks.

Vital U.S. air support for the Afghan forces has been massively curtailed by the handover.

For months, the Taliban have been effectively surrounding several provincial capitals across the country, with observers predicting that the militants were waiting for the complete withdrawal of foreign forces before ordering an onslaught on urban areas.

After they routed much of the north in recent weeks, the fall of Badghis would further tighten the Taliban's grip on western Afghanistan. Their forces have also inched closer to the nearby city of Herat, near the border with Iran.

If the Taliban capture Qala-e-Naw it will be of "strategic value as it creates a psychological effect of Afghan forces rapidly losing territory like dominoes against an unstoppable force," said Afghanistan expert Nishank Motwani.

Afghan defense officials have said they intend to focus on securing major cities, roads and border towns in the face of numerous Taliban offensives.

Meanwhile, Russian Foreign Minister Sergei Lavrov said that the situation in Afghanistan could swiftly deteriorate and said Moscow was ready to defend its regional allies if necessary.

Russian President Vladimir Putin Monday told Emomali Rakhmon, the president of Tajikistan, that Moscow would help the former Soviet republic contend with the fallout from NATO's exit from neighboring Afghanistan if needed.

Rakhmon has ordered the mobilization of 20,000 military reservists to bolster his country's border with Afghanistan after more than 1,000 Afghan security personnel fled across the frontier in response to Taliban militant advances.

Lavrov, speaking Wednesday during a visit to Laos, said Russia was ready to use its military base in Tajikistan, one of its biggest abroad, to ensure the security of its allies in the region. Tajikistan was part of the former Soviet Union and is in an area where Moscow tries to retain influence.

"We are closely watching what is happening in Afghanistan, where the situation has a tendency to swiftly deteriorate including against the backdrop of the hasty exit of American and other NATO troops," said Lavrov. "They were unable to achieve visible results when it comes to stabilizing the situation during the decades they spent there," he said.

Lavrov added that military obligations that Russia had undertaken in the framework of the Collective Security Treaty Organization (CSTO), a post-Soviet security bloc it leads and whose other members include Kazakhstan, Tajikistan and Kyrgyzstan, remained in full force. CSTO representatives had visited the Tajik-Afghan border, most of which Russian officials say is reportedly under Taliban control from the Afghan side, in order to assess the situation and report back, Lavrov said.

"We will do everything we can, including using the capabilities of the Russian military base on Tajikistan's border with Afghanistan, to prevent any aggressive impulses toward our allies," Lavrov said.