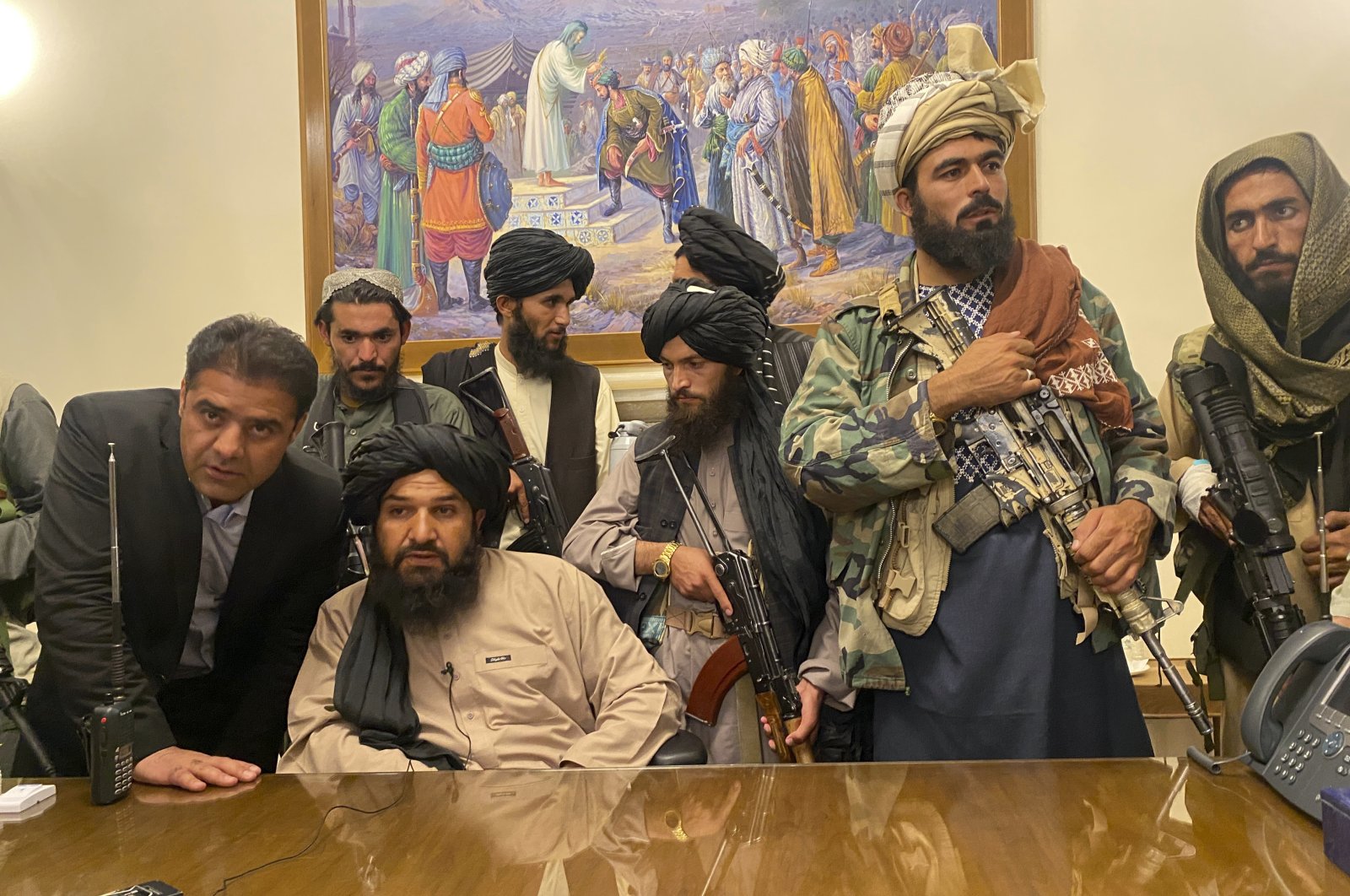 The Taliban said the war in Afghanistan is over after taking control of the presidential palace in Kabul while more than 60 countries call for the safe departure of Afghans and foreigners as panic, fear and anxiety spanned every corner of the capital

Afghan President Ashraf Ghani said Sunday that, "The Taliban have won with the judgment of their swords and guns, and are now responsible for the honor, property and self-preservation of their countrymen," after fleeing the country as the militants entered the capital virtually unopposed, saying he wanted to avoid bloodshed, while hundreds of Afghans desperate to leave flooded Kabul airport.

Al-Jazeera broadcast footage of what it said were Taliban commanders in the presidential palace with dozens of armed fighters. Militants with rifles slung over their shoulders were also seen walking Monday through the streets of the Green Zone, the formerly heavily fortified district that houses most embassies and international organizations.

In the capital, a tense calm set in, with most people hiding in their homes as the Taliban deployed fighters at major intersections. There were scattered reports of looting and armed men knocking on doors and gates, and there was less traffic than usual on eerily quiet streets. Fighters could be seen searching vehicles at one of the city’s main squares.

Naeem said the form of the new regime in Afghanistan would be made clear soon, adding the Taliban did not want to live in isolation and calling for peaceful international relations.

"We have reached what we were seeking, which is the freedom of our country and the independence of our people," he said. "We will not allow anyone to use our lands to target anyone, and we do not want to harm others."

A Taliban leader told Reuters the insurgents were regrouping from different provinces and would wait until foreign forces had left before creating a new governance structure. The leader, who requested anonymity, said Taliban fighters had been "ordered to allow Afghans to resume daily activities and do nothing to scare civilians."

"Normal life will continue in a much better way, that's all I can say for now," he told Reuters in a message.

"I'm in a complete state of shock," said Sherzad Karim Stanekzai, who spent the night in his carpet shop to guard it. "I know there will be no foreigners, no international people who will now come to Kabul."

A U.S. State Department spokesperson said early on Monday that all embassy personnel, including Ambassador Ross Wilson, had been transferred to Kabul airport, mostly by helicopter, to await evacuation and the American flag had been lowered and removed from the embassy compound.

Hundreds of Afghans invaded the airport's runways in the dark, pulling luggage and jostling for a place on one of the last commercial flights to leave before U.S. forces took over air traffic control on Sunday. Videos circulating on social media showed hundreds of people racing across the tarmac as U.S. soldiers fired warning shots in the air.

"This is our airport but we are seeing diplomats being evacuated while we wait in complete uncertainty," said Rakhshanda Jilali, a human rights activist who was trying to get to Pakistan, told Reuters in a message from the airport.

U.S. forces managing the airport fired into the air to stop Afghans surging onto the tarmac to try to board a military flight, a U.S. official said. Dozens of men tried to clamber up onto an overhead departure gangway to board a plane while hundreds of others milled about, a video posted on social media showed. New footage emerged Monday showing several dead bodies seen in Kabul airport after a night of chaos and fear. According to Reuters, at least five people were killed inside Kabul airport during the chaos.

One witness told Reuters he had seen the bodies of five people being taken to a vehicle. Another witness said it was not clear whether the victims were killed by gunshots or in a stampede. U.S. troops, who are in charge of the airport, earlier fired in the air to scatter the crowd, a U.S. official said. Officials were not immediately available to comment on the deaths.

Massouma Tajik, a 22-year-old data analyst, described scenes of panic at the airport, where she was hoping to board an evacuation flight. After waiting six hours, she heard shots from outside, where a crowd of men and women were trying to climb aboard a plane. She said U.S. troops sprayed gas and fired into the air to disperse the crowds after people scaled the walls and swarmed onto the tarmac. Gunfire could be heard in the voice messages she sent to The Associated Press (AP).

The Pentagon on Sunday authorized another 1,000 troops to help evacuate U.S. citizens and Afghans who worked for them, expanding its security presence on the ground to almost 6,000 troops within the next 48 hours.

More than 60 Western countries, including the United States, Britain, France and Japan, issued a joint statement saying all Afghans and international citizens who wanted to leave must be allowed to do so. Western nations, including France, Germany and New Zealand, said they were working to get citizens as well as some Afghan employees out. Russia said it saw no need to evacuate its embassy for the time being, while Turkey said its embassy would continue operations.

In a Facebook post, Ghani said he had left the country to avoid clashes with the Taliban that would endanger millions of Kabul residents. Some social media users branded Ghani, who did not disclose his location, a coward for leaving them in chaos.

Many Afghans fear the Taliban will return to past harsh practices in their imposition of Shariah, or Islamic law. During their 1996-2001 rule, women could not work and punishments such as stoning, whipping and hanging were administered.

U.N. Secretary-General Antonio Guterres urged all parties to exercise the utmost restraint and expressed particular concern about the future of women and girls. In Washington, opponents of President Joe Biden's decision to end America's longest war, launched after the Sept. 11, 2001, attacks, said the chaos was caused by a failure of leadership.

Biden has faced rising domestic criticism after sticking to a plan, initiated by his Republican predecessor, Donald Trump, to end the U.S. military mission by Aug. 31. Senate Republican leader Mitch McConnell blamed Biden for what he called a "shameful failure of American leadership."

"Terrorists and major competitors like China are watching the embarrassment of a superpower laid low," McConnell said. Naeem said the Taliban would adopt an international policy of two-way noninterference. "We do not think that foreign forces will repeat their failed experience."

By Monday morning, Afghanistan's Civil Aviation Authority issued an advisory saying the "civilian side” of the airport had been "closed until further notice” and that the military controlled the airspace. Afghanistan’s airspace is often used by long-haul carriers moving between the Far East and the West. Early Monday morning, flight-tracking data showed no immediate commercial flights over the country. In the capital itself a tense calm set in, with most people hiding in their homes. There were scattered reports of looting and armed men knocking on doors and gates.

The Taliban ruled Afghanistan from 1996 to 2001 with a harsh form of Shariah. Women were largely confined to their homes and suspected criminals faced amputation or public execution. The Taliban have sought to project greater moderation in recent years, but many Afghans remain skeptical and fear a rollback of individual rights.

New Zealand Prime Minister Jacinda Ardern called for the Taliban to uphold human rights and said the world was watching: "It's going to be all about the actions, not the words."

The Taliban had also harbored Osama bin Laden and al-Qaida in the years before they carried out the Sept. 11, 2001 attacks. That sparked a U.S.-led invasion that rapidly scattered al-Qaida and drove the Taliban from power. But the U.S. lost focus during the Iraq war and the Taliban eventually regrouped.

The militants captured much of the Afghan countryside in recent years and then swept into cities as U.S. forces prepared to withdraw ahead of an Aug. 31 deadline. When the Taliban last seized Kabul in 1996 it had been heavily damaged in the civil war that broke out among rival warlords after the Soviet withdrawal seven years earlier.

The city was then home to around a million people, most traveling on dusty roads by bicycle or aging taxi.

Today Kabul is a built-up city home to 5 million people, where luxury vehicles and SUVs struggle to push through endemic traffic jams.

Many of the younger Taliban fighters hail from rural areas without electricity or running water, and are getting their first glimpse of a modern city they had only previously heard stories about.