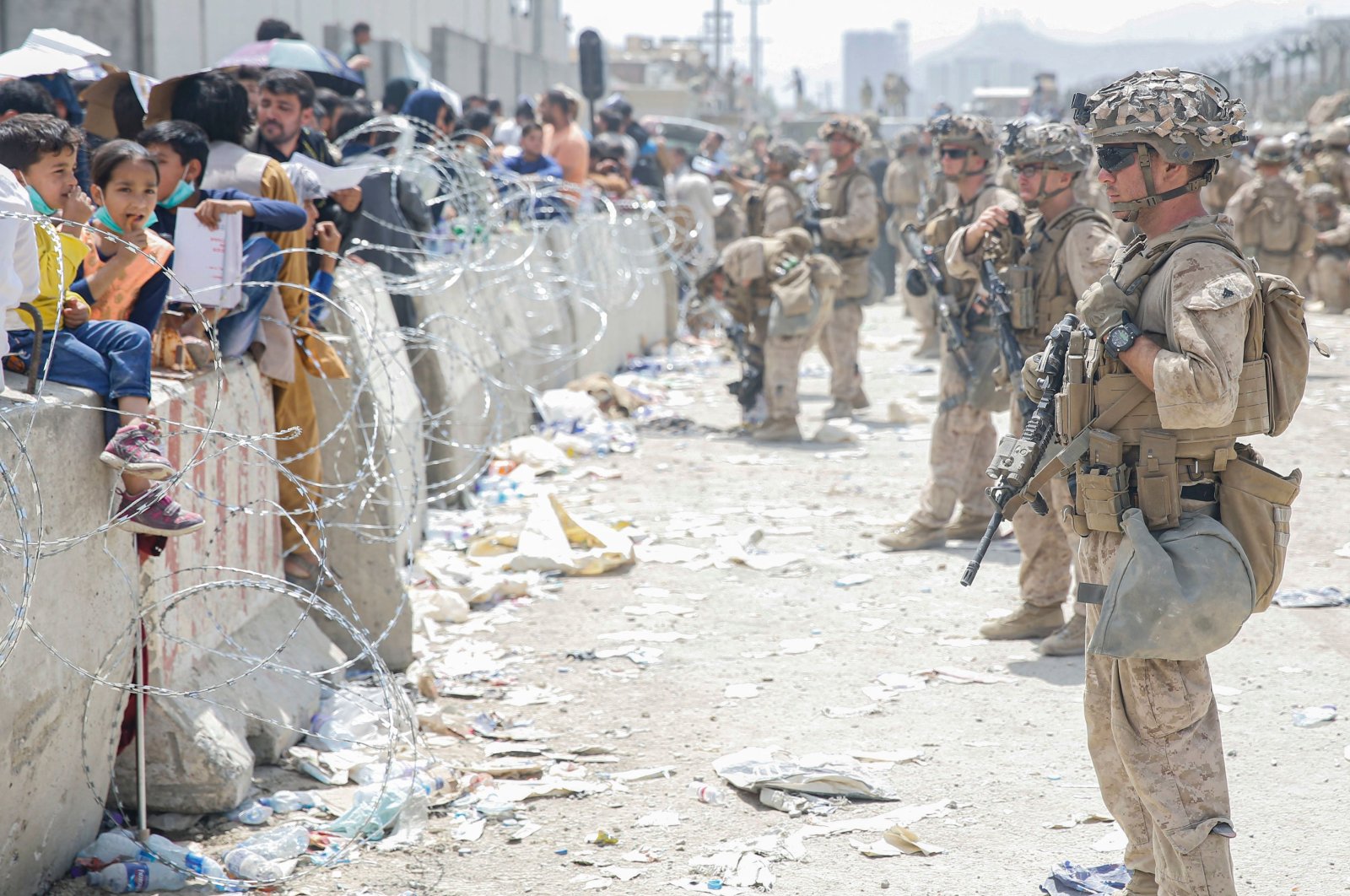 In this image courtesy of the U.S. Marine Corps, soldiers provide assistance during an evacuation at Hamid Karzai International Airport, Kabul, Afghanistan, on August 20, 2021. (Photo by Nicholas Guevara / US Marine Corps via AFP)
by Agencies Aug 21, 2021 3:44 pm
RECOMMENDED

Thousands of Afghans amassed near the military entrance gate of Kabul Hamid Karzai International Airport Saturday in a bid to leave the country before the Taliban solidify their rule and Western countries terminate their evacuation operations.

According to Anadolu Agency's (AA) Sayed Khodaverdi Sadat, shots were fired to disperse people from the area, where they had reached after staying at the main entrance for two days. The airport currently serves as the main lifeline for Afghans and foreign citizens trying to flee the country.

Meanwhile, the United States advised Americans in Afghanistan to avoid traveling to Kabul airport in an embassy travel advisory Saturday as thousands attempt to flee the country.

"Because of potential security threats outside the gates at the Kabul airport, we are advising U.S. citizens to avoid traveling to the airport and to avoid airport gates at this time unless you receive individual instructions from a U.S. government representative to do so," the advisory said.

The unexpected power grab by the Taliban earlier this week has triggered a rush to flee Afghanistan as many fear retribution. In the days since the Taliban took control of the capital and the country last Sunday, thousands of people have been airlifted out of Afghanistan from Kabul airport, the only part of the capital controlled by international troops.

Many desperate Afghans who have either worked with international troops over the past two decades or who work in areas such as human rights are fearing for their lives, with many trying to get themselves or family members inside the airport.

A report compiled for the United Nations warned that the Taliban is conducting targeted searches for supposed collaborators with the ousted government, despite assurances by the extremist group that it would not carry out reprisals.

There have been repeated armed confrontations at the gates to the airport compound. The U.S. military decides on when and how to open and close the gates, and the timing is not predictable.

Loudspeaker announcements at the northern entrance said the gate would now be closed for two days, a witness told Deustche Presse-Agentur (dpa).

A second eyewitness said that people from all walks of life were outside the airport: actors, TV personalities, young people, women with newborn babies or people in wheelchairs, among many others.

Images of a baby being handed to troops over the compound wall went viral Friday. A soldier grabbed the baby by the right arm and handed it to colleagues.

U.S. President Joe Biden has assured U.S. citizens and Afghans who worked with the Americans that they will be brought home, but there are many thousands still in the country.

Troops from many other countries, including Germany, Britain and Turkey, are carrying out simultaneous evacuation operations from the airport.

Meanwhile, the deputy head of the Taliban, Mullah Abdul Ghani Baradar, arrived in Kabul Saturday. Baradar, in charge of the Taliban's political office in Doha, will conduct talks with Taliban members and other politicians on the formation of a new government. He flew into Kandahar in southern Afghanistan with a delegation Tuesday afternoon.

Baradar is the highest-ranking representative of the Taliban known to have arrived in Afghanistan so far, and is tipped by intelligence sources to be given a post similar to that of prime minister.

In February 2020, he signed the agreement with the U.S. on behalf of the extremist organization to end the U.S.-led military mission in Afghanistan. The withdrawal of U.S. troops led to the decision by other Western powers to also withdraw.

Taliban leader Mawlawi Haibatullah Akhundzada has not been seen in Afghanistan since the Taliban takeover and his whereabouts are unknown.

This week, several high-ranking Taliban representatives had met former-President Hamid Karzai and Abdullah Abdullah, the chairperson of the High Council for National Reconciliation, for discussions on a future government.

Abdullah, a senior official in the ousted government, tweeted that he and Karzai met Saturday with Taliban’s acting governor for Kabul, who "assured us that he would do everything possible for the security of the people” of the city.

The Taliban have said they are planning to share power with other political forces. However, posts from Afghan locals and reports often proves otherwise

"Today some of my friends went to work at the court and the Taliban didn't let them into their offices. They showed their guns and said, ‘You’re not eligible to work in this government if you worked in the past one,'” one women's activist in Kabul told The Associated Press (AP) Saturday. She spoke on the condition of anonymity for fear of retaliation.

With a Turkish visa but no way to safely reach the airport, the activist described the gap between the Taliban's words and actions as "very alarming.” She said she was holed up in the city with a colleague, eating food delivered by a friend.

Unlike the 1990s, the Taliban now operate in a very different Afghanistan, facing far closer scrutiny this time around as Afghans share updates on social media. Some Afghans however fear retaliation, and are hurriedly wiping out their online presence instead.

Time is running out ahead of Biden’s Aug. 31 deadline to withdraw most remaining U.S. troops, and the president Friday night did not commit to extending it. He faces growing criticism as videos depict pandemonium and occasional violence outside the airport, as vulnerable Afghans who fear the Taliban's retaliation send desperate pleas not to be left behind.

Evacuations continued, though some outgoing flights were far from full because of the airport chaos, Taliban checkpoints and bureaucratic challenges. A German flight Friday night carried 172 evacuees, but two subsequent flights carried out just seven and eight people.

After a backlog at a transit facility in Qatar forced flights from Kabul to stop for several hours on Friday, the Gulf nation of Bahrain Saturday announced it was allowing flights to use its transit facilities for the evacuation. The United Arab Emirates (UAE), meanwhile, said it would host up to 5,000 Afghans "prior to their departure to other countries.”

On Friday, a U.S. defense official said about 5,700 people, including about 250 Americans, were flown out of Kabul aboard 16 C-17 transport planes, guarded by a temporary U.S. military deployment that’s building to 6,000 troops. On each of the previous two days, about 2,000 people were airlifted.

Officials also confirmed that U.S. military helicopters flew beyond Kabul airport to scoop up 169 Americans seeking to evacuate. No one knows how many U.S. citizens remain in Afghanistan, but estimates have ranged as high as 15,000.