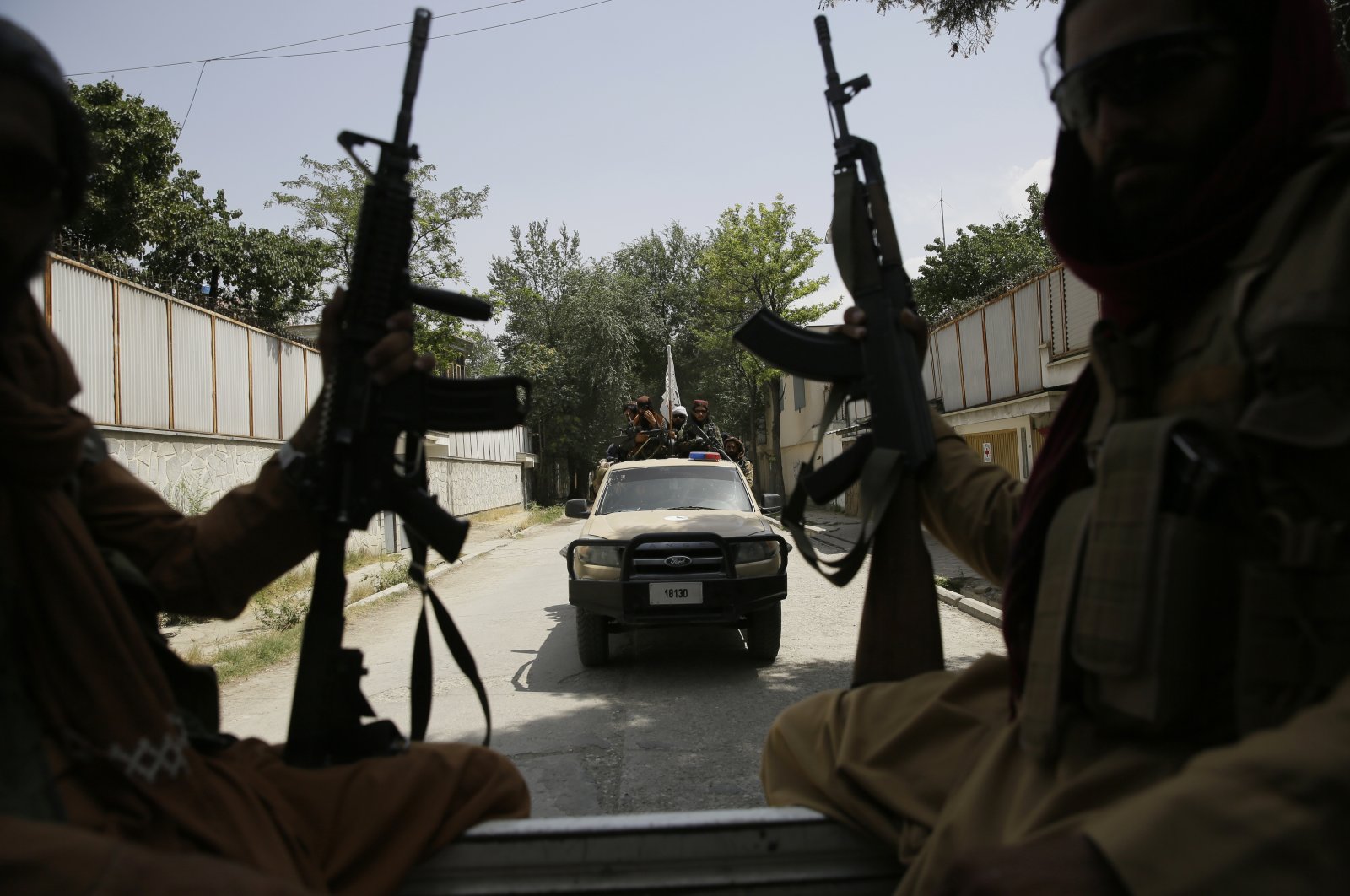 A confidential United Nations document asserts that the Taliban is intensifying a search for people, carrying out ‘door to door’ manhunts, while the chaotic U.S.-led evacuations struggle to move Afghan personnel and citizens out of Kabul

The United Nations has warned the Taliban are stepping up their search for people who have worked with United States and NATO forces and going door-to-door to find them, while chaos prevails in Kabul Hamid Karzai International Airport with Washington struggling to pick up the pace of American and Afghan evacuations.

With an Aug. 31 deadline looming, tens of thousands remain to be airlifted from the chaotic country. Taliban fighters and their checkpoints ringed the airport – major barriers for Afghans who fear that their past work with Westerners make them prime targets for retribution.

Hundreds of Afghans who lacked papers or clearance for evacuation also congregated outside the airport, adding to the chaos that has prevented even some Afghans who do have papers and promises of flights from getting through. It didn’t help that many of the Taliban fighters could not read the documents.

In a hopeful sign, State Department spokesperson Ned Price said in Washington that 6,000 people were cleared for evacuation Thursday and were expected to board military flights in the coming hours. That would mark a major increase from recent days. About 2,000 passengers were flown out on each of the past two days, Pentagon spokesperson John Kirby said.

Kirby said the military has aircraft available to evacuate 5,000 to 9,000 people per day, but until Thursday far fewer designated evacuees had been able to reach, and then enter, the airport. Kirby told reporters the limiting factor has been available evacuees, not aircraft. He said efforts were underway to speed processing, including adding State Department consular officers to verify paperwork of Americans and Afghans who managed to get to the airport.

Additional entry gates had been opened, he said. And yet, at the current rate it would be difficult for the U.S. to evacuate all of the Americans and Afghans who are qualified for and seeking evacuation by Aug. 31. President Joe Biden said Wednesday he would ensure no American was left behind, even if that meant staying beyond August, an arbitrary deadline that he set weeks before the Taliban climaxed a stunning military victory by taking Kabul last weekend. It was not clear if Biden might consider extending the deadline for evacuees who aren't American citizens.

Meanwhile, the confidential report – provided by the U.N.’s threat-assessment consultants and seen by a number of news media organizations – said the group has “priority lists” of individuals it wants to arrest and is threatening to detain or kill family members if the wanted refuse to turn up. According to the document, people who have played central roles in the Afghan military, police and intelligence units are at greatest risk.

The report asserted that "targeted door-to-door visits" have been carried out on a regular basis. It added that the militants are also monitoring people heading for the Kabul airport and have set up checkpoints in major cities, including the capital and Jalalabad. The document, dated Wednesday, was written by the Norwegian Center for Global Analyses, an organization that provides intelligence to U.N. agencies.

"They are targeting the families of those who refuse to give themselves up, and prosecuting and punishing their families 'according to Sharia law,'" Christian Nellemann, the group's executive director, told Agence France-Presse (AFP). "We expect both individuals previously working with NATO/U.S. forces and their allies, alongside their family members, to be exposed to torture and executions," he said.

"This will further jeopardize Western intelligence services, their networks, methods and ability to counter both the Taliban, ISIS (Daesh) and other terrorist threats ahead," he added. The report says the militants are "rapidly recruiting" new informers to work with the Taliban regime and are expanding their target lists by contacting mosques and brokers.

An Amnesty International report provided more evidence Friday that undercut the Taliban's claims they have changed. The rights group said that its researchers spoke to eyewitnesses in Ghazni province who recounted how the Taliban killed nine ethnic Hazara men in the village of Mundarakht on July 4-6. It said six of the men were shot, and three were tortured to death. Hazaras are Shiite Muslims who were previously persecuted by the Taliban and who made major gains in education and social status in recent years.

The brutality of the killings was "a reminder of the Taliban’s past record, and a horrifying indicator of what Taliban rule may bring,” said Agnes Callamard, the head of Amnesty International. The rights group warned that many more killings may have gone unreported because the Taliban cut cellphone services in many areas they’ve captured to prevent images from being published.

Biden recently has faced waves of criticism from world leaders and members of Congress, from both the Democratic and Republican parties, over U.S. efforts to evacuate Afghan personnel and citizens as well as the chaotic troop withdrawal from the war-torn country. Democratic Rep. Seth Moulton, a former Marine who served four tours in Iraq, called the Biden administration’s evacuation operations the “greatest foreign policy disaster that we’ve seen in a very long time.”

The British government has also come under fire with Foreign Secretary Dominic Raab facing mounting pressure to resign over his handling of the crisis. The opposition Labour party said that there had been an “unforgivable failure of leadership” by the British government. The party has compiled a list of 18 urgent questions that the foreign minister must answer about his trip and how his agency is dealing with the crisis.

Raab, who turned down calls for resignation Friday, was reportedly "unavailable" when his office told him to "urgently" call Afghan Foreign Minister Hanif Atmar on August 13, two days before the Taliban march in Kabul, to arrange assistance for those who supported British troops. It was reported Thursday that Atmar refused to arrange a telephone conversation with a junior minister, postponing it to the next day. Since then, it turned out that no call took place.

At the airport, military evacuation flights continued, but access remained difficult for many. On Thursday, Taliban militants fired into the air to try to control the crowds gathered at the airport’s blast walls. Men, women and children fled. U.S. Navy fighter jets flew overhead, a standard military precaution but also a reminder to the Taliban that the U.S. has the firepower to respond to a combat crisis. There is no accurate figure of the number of people – Americans, Afghans or others – who are in need of evacuation as the process is almost entirely self-selecting.

For example, the State Department says that when it ordered its nonessential embassy staff to leave Kabul in April after Biden’s withdrawal announcement, fewer than 4,000 Americans had registered for security updates.

The actual number, including dual U.S.-Afghan citizens along with family members, is likely much higher, with estimates ranging from 11,000 to 15,000. Tens of thousands of Afghans may also be in need of escape.

Compounding the uncertainty, the U.S. government has no way to track how many registered Americans may have left Afghanistan already. Some may have returned to the U.S. but others may have gone to third countries.

At the Pentagon, Kirby declined to say whether Defense Secretary Lloyd Austin had recommended to Biden that he extend the Aug. 31 deadline. Given the Taliban's takeover of the country, staying beyond that date would require at least the Taliban's acquiescence, he said. He said he knew of no such talks yet between U.S. and Taliban commanders, who have been in regular contact for days to limit conflict at the airport as part of what the White House has termed a "safe passage” agreement worked out Sunday.

"I think it is just a fundamental fact of the reality of where we are, that communications and a certain measure of agreement with the Taliban on what we're trying to accomplish has to occur,” Kirby said. Of the approximately 2,000 people airlifted from the airport in the last 24 hours that ended Wednesday morning, nearly 300 were Americans, Kirby said.

U.S. lawmakers were briefed Thursday morning that 6,741 people had been evacuated since Aug. 14, including 1,762 American citizens and Green Card holders, according to two congressional aides. Although Afghanistan had been a hot spot for the coronavirus pandemic, the State Department said Thursday that evacuees are not required to get negative COVID-19 results.

"A blanket humanitarian waiver has been implemented for COVID-19 testing for all persons the U.S. government is relocating from Afghanistan,” the department said, according to The Associated Press (AP).

Medical exams, including COVID-19 tests, had been required for evacuees prior to the Taliban’s takeover of Kabul, which added extra urgency to efforts to get at-risk Afghans out. Additional American troops continued to arrive at the airport.

As of Thursday, there were about 5,200, including Marines who specialize in evacuation coordination and an Air Force unit that specializes in emergency airport operations. Biden has authorized a total deployment of about 6,000. Hoping to secure evacuation seats are American citizens and other foreigners, Afghan allies of Western forces and women, journalists, activists and others most at risk from the fundamentalist Taliban.

In June, more than 20 diplomats at the U.S. Embassy in Kabul registered their concerns that the evacuation of Afghans who had worked for America was not proceeding quickly enough. In a cable sent through the State Department’s dissent channel, a time-honored method for foreign service officers to register opposition to administration policies, the diplomats said the situation on the ground was dire, that the Taliban would likely seize control of the capital within months of the Aug. 31 pullout, and urged the administration to immediately begin a concerted evacuation effort, according to officials familiar with the document.

Will U.S. troops go beyond the airport perimeter to collect and escort people? Austin suggested Wednesday that this was not currently feasible. "We don't have the capability to go out and collect large numbers of people,” he told reporters.

Austin added that evacuations would continue "until the clock runs out or we run out of capability.” Afghans in danger because of their work with the U.S. military or U.S organizations, and Americans scrambling to get them out, also pleaded with Washington to cut the red tape that has complicated matters.

"If we don’t sort this out, we’ll literally be condemning people to death,” said Marina Kielpinski LeGree, the American head of a nonprofit, Ascend. The organization's young Afghan female colleagues were in the mass of people waiting for flights at the airport in the wake of days of mayhem, tear gas and gunshots.