Taliban urge clearing of Kabul airport after 12 killed since takeover 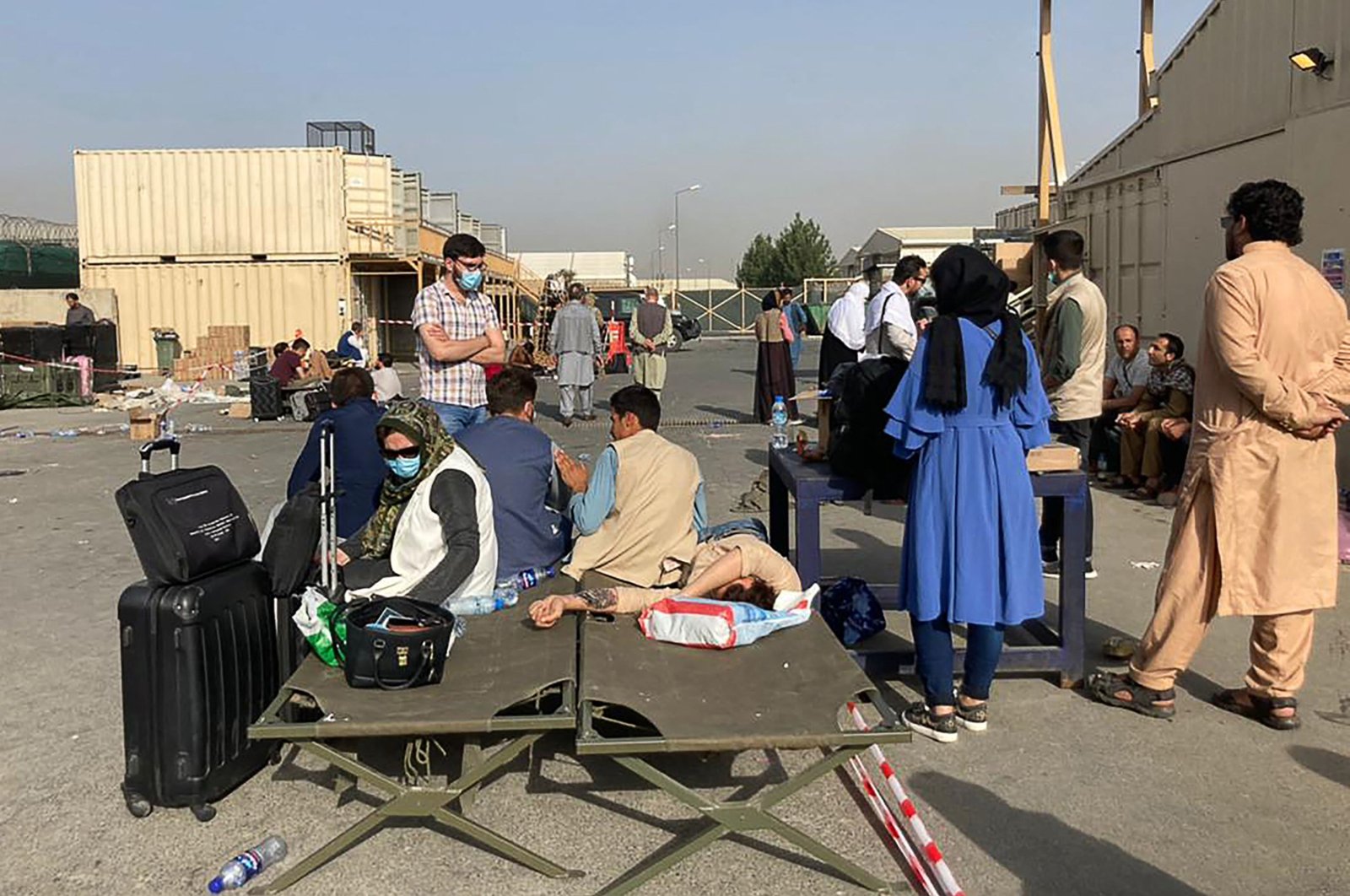 People wait to be evacuated from Afghanistan at the airport in Kabul on Aug. 18, 2021 following the stunning Taliban takeover of the country. (AFP Photo)
by REUTERS Aug 19, 2021 9:36 am
RECOMMENDED

A total of 12 people have been killed in and around the airport in the Afghan capital, Kabul, the Taliban and NATO officials said, since the group seized the city on Sunday, triggering a rush of fearful people trying to leave.

The deaths were caused either by gun shots or in stampedes, the Taliban official said on Thursday, and he urged people still crowded at the gates of the facility to go home if they did not have the legal right to travel.

"We don't want to hurt anyone at the airport," said the Taliban official, who declined to be identified.

As the United States and other Western powers pressed on with the evacuation of their nationals and some Afghans on Thursday, the rest of Afghanistan waited to see whether the nation's independence day would stir more anti-Taliban protests.

Demonstrations in the eastern city of Jalalabad on Wednesday marked the first major display of collective defiance since the insurgents seized control of the capital, Kabul, at the start of the week.

In normal times, the country would celebrate Afghanistan's 1919 independence from British control on Aug. 19, but scenes in Jalalabad raised the prospect that people could use the patriotic occasion to protest against Taliban rule.

Two witnesses and a former police official told Reuters Taliban fighters opened fire when protesters in Jalalabad tried to hoist the national flag at a square, killing three and wounding more than a dozen. Video aired by British news channel Sky News showed hundreds of Afghans gathered in Jalalabad, with the black, red and green tricolor flying from several rooftops and carried by some protesters. Sky reported they had torn down the Taliban's white flag.

"I am standing here in front of you. You can hit me with 30 bullets, kill me, I will sacrifice my life for this flag. This is my flag. My government will soon be back, God willing," said one protester wrapped in the tricolor in the Sky report.

Taliban spokespeople could not be reached for comment. The center of resistance is the Panjshir Valley, an ethnic-Tajik stronghold to the northeast of Kabul. In an op-ed for the Washington Post, Amad Massoud, the Panjshiri leader of the National Resistance Front of Afghanistan called for Western support and arms to fight the Taliban.

"I write from the Panjshir Valley today, ready to follow in my father’s footsteps, with mujahideen fighters who are prepared to once again take on the Taliban," wrote Massoud, the son of Amhad Shah Massoud, a resistance leader killed by suspected al-Qaeda militants on behalf of the Taliban in 2001.

"We have fought for so long to have an open society, one where girls could become doctors, our press could report freely, our young people could dance and listen to music or attend soccer matches in the stadiums that were once used by the Taliban for public executions – and may soon be again."

As the airlift of Western citizens and Afghans who worked for foreign governments sought to ramp up, President Joe Biden said U.S. forces would remain until the evacuation of Americans was finished, even if that meant staying past the Aug. 31 U.S. deadline for complete withdrawal.

Witnesses said Kabul Hamid Karzai International Airport was calm early on Thursday. In total, at least 8,000 people have been evacuated since Sunday, a Western security source in Kabul said. A day earlier armed Taliban members prevented people from getting into the airport compound.

"It's a complete disaster. The Taliban were firing into the air, pushing people, beating them with AK47s," said one person who was trying to get through on Wednesday.

A Taliban official said commanders and soldiers had fired into the air to disperse crowds outside Kabul airport, but told Reuters: "We have no intention to injure anyone."

The U.S. Federal Aviation Administration (FAA) said domestic air carriers and civilian pilots will be allowed to fly into Kabul to conduct evacuation or relief flights only with prior U.S. Defense Department approval.

Facing a barrage of criticism over the U.S. withdrawal, Biden said chaos was inevitable. Asked in an interview with ABC News if the exit of U.S. troops could have been handled better, Biden said: "No. ... The idea that somehow, there's a way to have gotten out without chaos ensuing, I don't know how that happens."

A new government to replace that of President Ashraf Ghani, who is in exile in the United Arab Emirates (UAE), may take the form of a ruling council, with Taliban supreme leader Haibatullah Akhundzada in overall charge, a senior member of the group said.

Afghanistan would not be a democracy. "It is sharia law and that is it," Waheedullah Hashimi, a senior Taliban official, told Reuters. Ghani, who has been bitterly criticized by former ministers for leaving Afghanistan as Taliban forces swept into Kabul on Sunday, said he had followed the advice of government officials. He denied reports he took large sums of money with him.

"If I had stayed, I would be witnessing bloodshed in Kabul," Ghani said in a video streamed on Facebook.