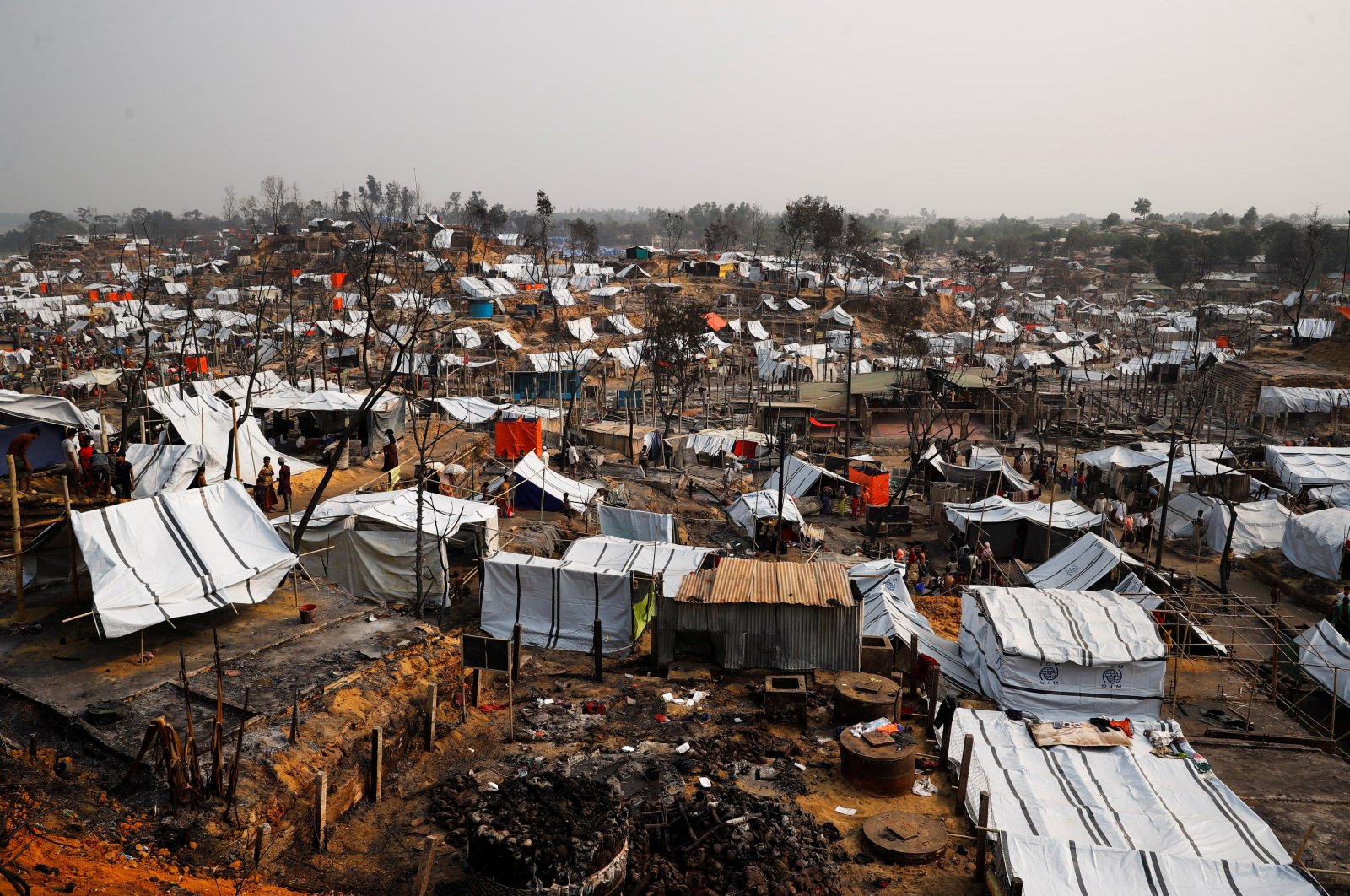 A general view of the Rohingya refugee camp after a massive fire broke out two days ago and destroyed thousands of shelters in Cox's Bazar, Bangladesh, March 24, 2021. (Reuters Photo)
by Daily Sabah with Reuters Mar 25, 2021 1:28 pm
RECOMMENDED

Turkey's state-run aid agency will provide two meals a day to approximately 20,000 people who were left without shelter after a massive blaze swept through a Bangladeshi refugee camp holding almost a million Rohingya Muslims on Monday, leaving at least 15 people dead, over 500 injured and nearly 50,000 homeless.

The Turkish Cooperation and Coordination Agency (TIKA), which plans to reestablish a kitchen in the region in a short time, will provide two hot meals a day to nearly 20,000 refugees in cooperation with the World Food Program (WFP), in an effort to help Rohingyas in Cox's Bazar district through difficult times.

According to TIKA the delivery of hot food by Bangladesh authorities will take about 15 days. During this period, TIKA will continue to work 24 hours to distribute food to Rohingya refugees affected by the fire.

The United Nations High Commissioner for Refugees (UNHCR) representative in Bangladesh, Johannes Van der Klaauw said that about 400 people are still missing after the fire that broke out in the Balukhali camp in Cox's Bazar on March 23. An executive director of Burma Human Rights Network (BHRN) Kyaw Win said that approximately 15,000 shelters were destroyed in the camp, while at least 28 people died.

On Thursday, families left homeless by the fire, built shelters using tarpaulin, ropes and bamboo provided by aid groups. With critical infrastructure including medical facilities and sanitation systems destroyed, fears are rising about the spread of disease.

"We have to act quickly to rebuild not only homes, but the entire infrastructure of damaged areas," Snigdha Chakraborty, Bangladesh country manager of aid agency Catholic Relief Services, told Reuters. "Rebuilding latrines, wells and bathing spaces is crucial to saving lives and preventing disease."

Despite the efforts, many were still without shelter four days on from the fire, in rising heat and humidity.

"Everything has gone," said Mohammed Salam, a 50-year-old refugee. "I, my wife and my six sons, are still sleeping under the sky. I hope I'll get a tent today."

The blaze is the latest trauma for many of the refugees, who fled from their homes in western Myanmar when the military there launched an offensive against Rohingya insurgents in 2017. Citing the overcrowding in the camps thrown up across deforested hills, Bangladesh has been trying to move 100,000 Rohingya to a remote, flood-prone Bay of Bengal island, despite opposition from aid groups and the reluctance of many Rohingya.