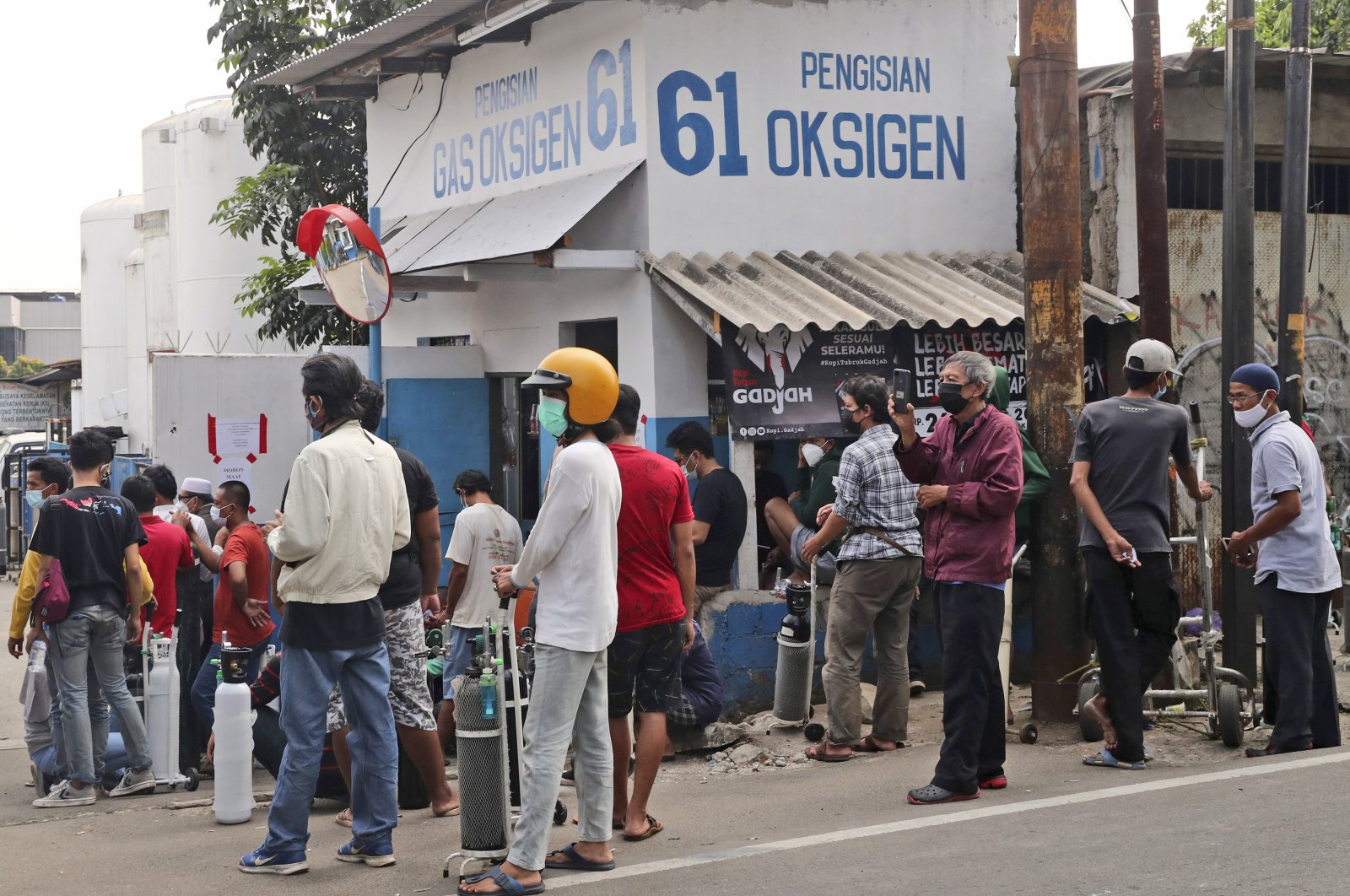 While many Asian countries grapple with the worst spike yet in COVID-19 infections, the slow flow of vaccine doses from around the world is finally gaining momentum, raising hopes that vaccination rates could increase and help mitigate the effects of the rapidly spreading delta variant.

With many vaccine pledges still unfulfilled and rates of infection spiking across multiple countries, however, experts say more needs to be done to help nations struggling with the overflow of patients and shortages of oxygen and other critical supplies. Some 1.5 million doses of the Moderna vaccine arrived Thursday afternoon in Indonesia, which has become a dominant hot spot with record-high infections and deaths.

The U.S. shipment follows 3 million other American doses that arrived Sunday, and 11.7 million doses of AstraZeneca that have come in batches since March through the U.N.-backed COVAX mechanism, the last earlier this week.

"It’s quite encouraging,” said Sowmya Kadandale, health chief in Indonesia of UNICEF, which is in charge of the distribution of vaccines provided through COVAX. "It seems now to be, and not just in Indonesia, a race between the vaccines and the variants, and I hope we win that race.”

Many, including the World Health Organization (WHO), have been critical of the vaccine inequalities in the world, pointing out that many wealthy nations have more than half of their populations at least partially vaccinated, while the vast majority of people in lower-income countries are still waiting on a first dose.

The International Red Cross warned this week of a "widening global vaccine divide” and said wealthy countries needed to increase the pace of following through on their pledges. "It’s a shame it didn’t happen earlier and can’t happen faster,” Alexander Matheou, the Asia-Pacific director of the Red Cross, said of the recent uptick in deliveries.

"There’s no such thing as too late – vaccinating people is always worth doing – but the later the vaccines come, the more people will die.” Vietnam, Thailand and South Korea have all imposed new lockdown restrictions over the past week as they struggle to contain rapidly rising infections amid sluggish vaccination campaigns.

In South Korea – widely praised for its initial response to the pandemic that included extensive testing and contact tracing – a shortage in vaccines has left 70% of the population still waiting for their first shot. Thailand, which only started its mass vaccination in early June, is seeing skyrocketing cases and record deaths, and only about 15% of people have had at least one shot. In Vietnam, only about 4% have.

"Parts of the world ... are talking about reclaiming lost freedoms such as going back to work, opening the cinemas and restaurants,” Matheou told The Associated Press (AP). "This part of the world is far away from that.”

Indonesia started aggressively vaccinating earlier than many in the region, negotiating bilaterally with China for the Sinovac jabs. Now about 14% of its population – the fourth largest in the world – has at least one dose of a vaccine, primarily Sinovac. Several countries also have their own production capabilities, including South Korea, Japan and Thailand, but still need more doses to fill the needs of the region’s huge population.

"Both Moderna and AstraZeneca have been really critical in ramping up these numbers and ensuring that the supplies are available,” said UNICEF's Kadandale, noting that Indonesia plans to have some additional 208.2 million people vaccinated by year’s end and is giving 1 million shots daily.

"Every single dose does make a huge difference.”

Many other countries in the region have vaccination rates far below Indonesia’s for a variety of reasons, including production and distribution issues as well as an initial wait-and-see attitude from many early on when numbers were low and there was less of a sense of urgency.

Some were shocked into action after witnessing the devastation in India in April and May as the country’s health system collapsed under a severe spike in cases that caught the government unprepared and led to mass fatalities.

At the same time, India – a major regional producer of vaccines – stopped exporting doses so that it could focus on its own suffering population. The U.S. has sent tens of millions of vaccine doses to multiple countries in Asia recently, part of President Joe Biden’s pledge to provide 80 million doses, including Vietnam, Laos, South Korea and Bangladesh. The U.S. plans to donate an additional 500 million vaccines globally in the next year, and 200 million by the end of 2021.

"Indonesia is a critical partner for U.S. engagement in Southeast Asia and the vaccines come without strings attached,” said Scott Hartmann, a spokesman for the U.S. Embassy in Jakarta. "We’re doing this with the object of saving lives and ending the global pandemic, and equitable global access to safe and effective vaccines is essential.”

Earlier in the week, German Foreign Minister Heiko Maas, whose country is one of the largest financial backers of COVAX, accused Russia and China of using their delivery of vaccines for policy leverage.

"We note, in particular with China, that the supply of vaccines was also used to make very clear political demands of various countries,” he said, without providing specific examples. There are also growing questions about the effectiveness of China’s Sinovac vaccine against the delta variant of the virus.

Sinovac has been authorized by WHO for emergency use but Indonesia also said it was planning boosters for health workers, using some of the newly delivered Moderna doses, after reports that some of the health workers who had died since June had been fully vaccinated with the Chinese shot.

"We have still found people getting severe symptoms or dying even when they are vaccinated,” Pandu Riono, an epidemiologist with the University of Indonesia, said about the Sinovac shot.

"It’s only proven that some vaccines are strong enough to face the delta variant – AstraZeneca, Moderna and Pfizer seem capable.” While the majority of recent deliveries have been American, Japan was sending 1 million doses of AstraZeneca on Thursday each to Indonesia, Taiwan and Vietnam as part of bilateral deals, and Vietnam said it was receiving 1.5 million more AstraZeneca doses from Australia.

The Philippines is expecting a total of 16 million doses in July, including 3.2 million from the U.S. later this week, 1.1 million from Japan, 132,000 of Sputnik V from Russia, as well as others through COVAX.

Japan is also is sending 11 million through COVAX this month to Bangladesh, Cambodia, Iran, Laos, Nepal, Sri Lanka, and others. Canada this week committed an additional 17.7 million surplus doses to the 100 million already pledged through COVAX, which is coordinated by Gavi, a vaccine alliance. France delivered 1.7 million doses worldwide through June with COVAX and is sending millions more this summer.

In addition to distributing some donated vaccines, financial contributions to COVAX also help fund the purchase of doses to distribute for free to 92 low- or moderate-income nations. Earlier this month, it took blistering criticism from the African Union (AU) for how long it was taking for vaccines to reach the continent, noting that just 1% of Africans are fully vaccinated.

Gavi said the vaccine shortfall so far this year is because the major COVAX supplier, the Serum Institute of India, diverted production to domestic use. In its latest supply forecast, however, Gavi shows deliveries just beginning a sharp uptick and still on track to meet the goal of about 1.5 billion doses by year’s end, representing 23% coverage in lower- and middle-income nations, and more than 5 billion doses by the end of 2022.

"It’s better to focus on vaccinating the world and to avoid hoarding doses,” said Matheou of the Red Cross. "Sharing vaccines makes everyone safer.”