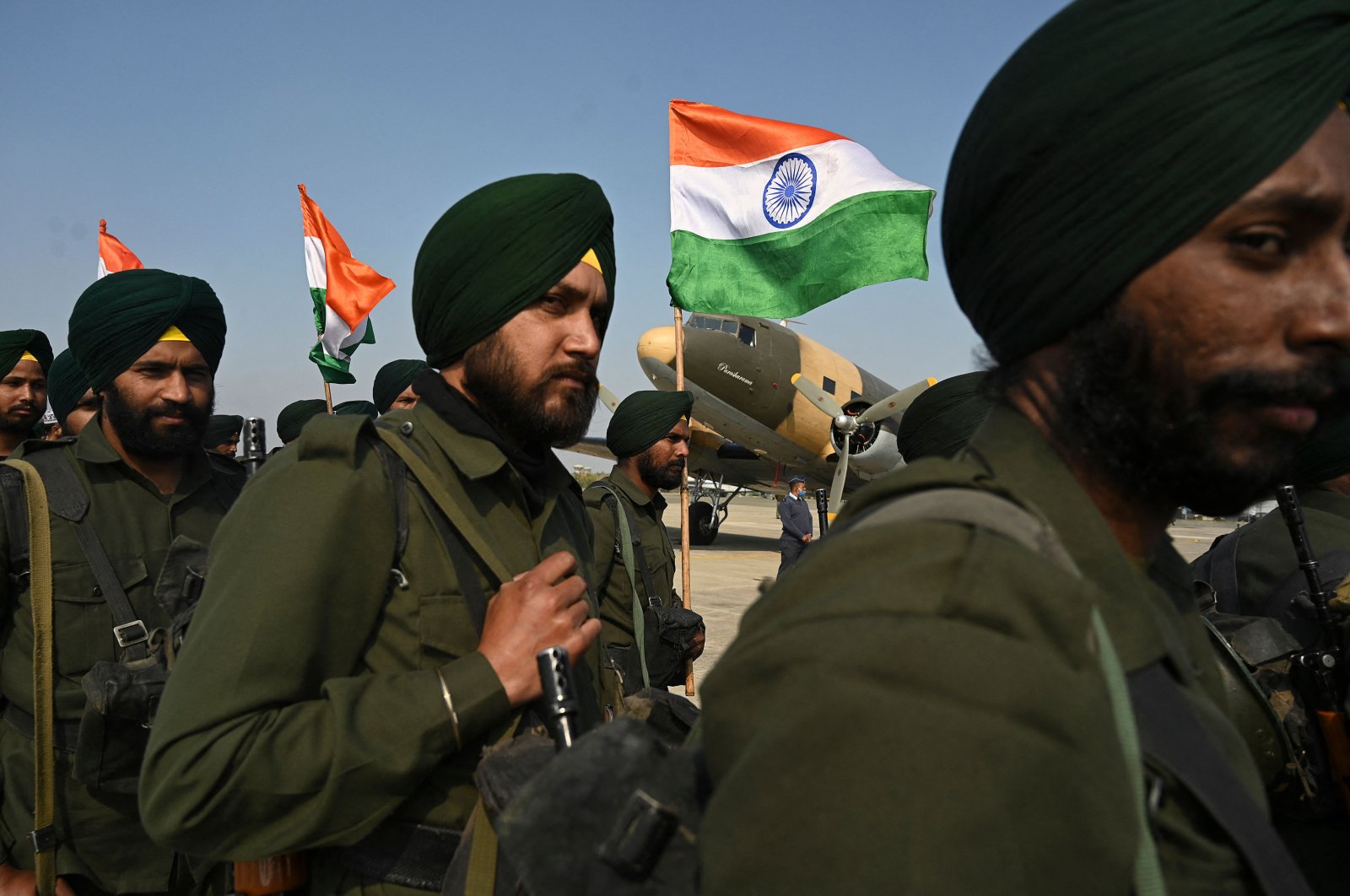 Indian army soldiers perform during a re-enactment of the 1947 landings of Indian troops at Srinagar, during a function at the Indian Air-Force base in Srinagar on Oct. 27, 2021. (AFP Photo)
by Anadolu Agency Oct 28, 2021 10:12 am

Speaking at a rally in the capital Islamabad on Kashmir's "Black Day," Alvi said the current Indian government led by Prime Minister Narendra Modi has committed the worst atrocities against the people of Kashmir.

"The world should fulfill its promises made with the Kashmiri people," the president said, referring to U.N. Security Council resolutions on Kashmir.

After gaining independence from British colonial rule, Indian troops positioned themselves in Srinagar, the capital of Jammu and Kashmir on Oct. 27, 1947

Pakistanis and Kashmiris commemorate the anniversary of the Indian action as "Black Day," while India commemorates it as "Accession Day," and the region has been a source of tension between India and Pakistan ever since.

In 1989, Kashmiri resistance groups launched a campaign for independence or unification with Pakistan, leading to more than 70,000 deaths, according to several human rights groups.

"Pakistan wants to draw the attention of the governments and people around the world that this is not a matter of trade (with India). There is no democracy in India but stories of minorities' oppression as especially Muslims are being oppressed there," Alvi added.

To show solidarity with Kashmiris, the president led a rally from Parliament House to D-Chowk, which was joined by National Assembly Speaker Asad Qaiser, federal ministers, lawmakers, officials and civil society members.

Criticizing Modi's policies, Alvi alleged that his "fascist" government has unleashed a wave of atrocities against Muslims and other minority groups in India. He also accused New Delhi of violating human rights in Kashmir and stated that the world should take notice of the sufferings of the Kashmiri people due to the continued military siege imposed by the Indian government in the territory since August 2019.

The country marked "Black Day" to express solidarity with the people of Jammu and Kashmir on the 74th anniversary of the region's dispute.

The day began with special morning prayers in mosques for those killed in the conflict in Indian-administered Kashmir. Political, social and human rights activists organized rallies in major cities including Karachi, Lahore, Islamabad, Peshawar and Muzaffarabad to condemn the valley's "illegal occupation" and demand that the U.N. fulfill its resolutions on Kashmir.

Meanwhile, Pakistani Prime Minister Imran Khan reiterated his country's unflinching diplomatic, moral and political support for the people of Kashmir. "Unfortunately, today's India is ruled by the ideology of the RSS (a Hindu nationalist group that eventually gave rise to India's ruling party), which has no place for Muslims or other minorities in its extremist ideology.

As a result, the ruling Bharatiya Janata Party (BJP) has resorted to more brutal methods to stifle the voice of Kashmiris," Khan said in a statement. He urged the international community to play its role in putting pressure on India to immediately stop human rights violations in Kashmir and allow Kashmiris to decide their future in accordance with U.N. Security Council resolutions.

Kashmir, a Muslim-majority Himalayan region, is held by India and Pakistan in parts and claimed by both in full. A small sliver of Kashmir is also held by China. Since they were partitioned in 1947, India and Pakistan have fought three wars – in 1948, 1965, and 1971 – two of them over Kashmir. Indian and Pakistani troops have also fought intermittently in the northern Siachen region since 1984. A cease-fire took effect in 2003.

Some Kashmiri groups in Jammu and Kashmir have been fighting against the Indian rule for independence or for unification with neighboring Pakistan.