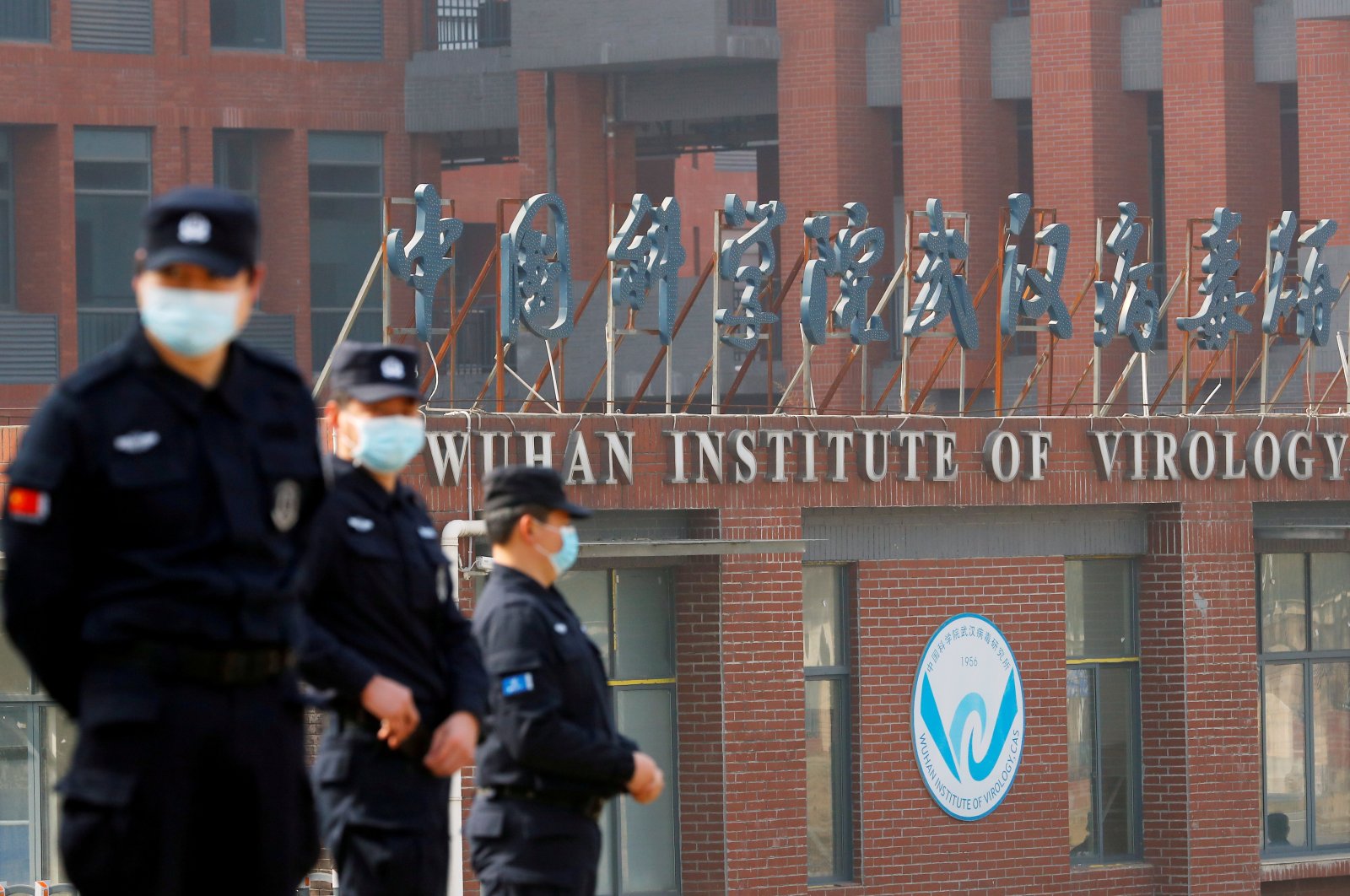 Security personnel keep watch outside the Wuhan Institute of Virology during the visit by the World Health Organization (WHO) team tasked with investigating the origins of the coronavirus disease (COVID-19), in Wuhan, Hubei province, China, Feb. 3, 2021. (Reuters Photo)
by Agencies May 27, 2021 11:29 am

President Joe Biden ordered several United States agencies to review the origins of the COVID-19 pandemic, prompting an angry response from China that asserted Washington's remarks are a fixation on 'political manipulation'

U.S. President Joe Biden instructed American intelligence officials to review classified information regarding the origins of the COVID-19 pandemic, including any possibility the trail might lead to a Chinese laboratory, in a move that drew wide condemnation from Beijing.

After months of minimizing that possibility as a fringe theory, the Biden administration is joining worldwide pressure for China to be more open about the outbreak, aiming to head off Republican complaints the president has not been tough enough as well as to use the opportunity to press China on alleged obstruction.

Biden on Wednesday asked U.S. intelligence agencies to report back within 90 days. He directed U.S. national laboratories to assist with the investigation and the intelligence community to prepare a list of specific queries for the Chinese government. He called on China to cooperate with international probes into the origins of the pandemic.

Republicans, including former President Donald Trump, have promoted the theory that the virus emerged from a laboratory accident rather than naturally through human contact with an infected animal in Wuhan, China.

Biden in a statement said the majority of the intelligence community had "coalesced” around those two scenarios but "do not believe there is sufficient information to assess one to be more likely than the other.” He revealed that two agencies lean toward the animal link and "one leans more toward” the lab theory, "each with low or moderate confidence."

"The United States will also keep working with like-minded partners around the world to press China to participate in a full, transparent, evidence-based international investigation and to provide access to all relevant data and evidence," said Biden.

His statement came after weeks of the administration endeavoring to avoid public discussion of the lab leak theory and privately suggesting it was farfetched. In another sign of shifting attitudes, the Senate approved two Wuhan lab-related amendments without opposition, attaching them to a largely unrelated bill to increase U.S. investments in innovation.

One of the amendments, from Sen. Rand Paul, R-Ky., would block U.S. funding of Chinese "gain of function” research on enhancing the severity or transmissibility of a virus. Paul has been critical of Dr. Anthony Fauci, the government's top infectious disease expert, and aggressively questioned him at a recent Senate hearing over the work in China.

The other amendment was from GOP Sen. Joni Ernst of Iowa and it would prevent any funding to the Wuhan Institute of Virology. Both were approved without roll call votes as part of the broader bill that is still under debate in the Senate. As for the origin of the pandemic, Fauci, a White House coronavirus adviser, said Wednesday that he and most others in the scientific community "believe that the most likely scenario is that this was a natural occurrence, but no one knows that 100% for sure.”

"And since there’s a lot of concern, a lot of speculation and since no one absolutely knows that, I believe we do need the kind of investigation where there’s open transparency and all the information that’s available, to be made available, to scrutinize,” Fauci said at a Senate hearing, according to The Associated Press (AP)

White House press secretary Jen Psaki said Tuesday that the White House supports a new World Health Organization (WHO) investigation in China, but she added that an effective probe "would require China finally stepping up and allowing access needed to determine the origins.” Biden still held out the possibility that a firm conclusion may never be reached, given the Chinese government's refusal to fully cooperate with international investigations.

"The failure to get our inspectors on the ground in those early months will always hamper any investigation into the origin of COVID-19,” he said.

Following Biden's order, China hit out at the "dark history" of the U.S. intelligence community. Rejecting the need for a new investigation into the pandemic, a ministry of foreign affairs spokesperson on Thursday said the Biden administration's "motive and purposes are clear."

"The dark history of the U.S. intelligence community has long been known to the world," Zhao Lijian added, referring to the U.S.' unfounded allegations of weapons of mass destruction, which justified its invasion of Iraq, as Agence France-Presse (AFP) reported.

The Chinese Embassy in Washington, without mentioning the Biden order, accused unnamed political forces of being fixated on a blame game while ignoring the urgent need to combat the pandemic.

"Smear campaign and blame shifting are making a comeback, and the conspiracy theory of ‘lab leak’ is resurfacing,” the embassy said in a statement posted Wednesday on its website. Administration officials continue to harbor strong doubts about the lab leak theory.

“Some political forces have been fixated on political manipulation and (the) blame game,” the embassy in Washington said.

Rather, they view China’s refusal to cooperate in the investigation – particularly on something of such magnitude – as emblematic of other irresponsible actions on the world stage. Privately, administration officials say the end result, if ever known, won’t change anything, but note China’s stonewalling is now on display for the world to see.

"China’s position that their part in this investigation is complete is disappointing and at odds with the rest of the international community that is working collaboratively across the board to bring an end to this pandemic and improve global health security," said spokesperson Ned Price.

Research into the origins of the virus is critically important, said Arinjay Banerjee, a virologist at the Vaccine and Infectious Disease Organization in Saskatchewan, Canada, because, "If you don’t know where it came from, how are you going to stop it from spreading it again?”

"The great probability is still that this virus came from a wildlife reservoir,” he said, pointing to the fact that spillover events – when viruses jump from animals to humans – are common in nature, and that scientists already know of two similar beta coronaviruses that evolved in bats and caused epidemics when humans were infected, SARS1 and MERS.

"The evidence we so far have suggests that this virus came from wildlife,” he said; however, the case is not completely closed. "There are probabilities, and there are possibilities,” Banerjee said.

"Because nobody has identified a virus that’s 100% identical to SARS-CoV-2 in any animal, there is still room for researchers to ask about other possibilities.”

Andy Slavitt, Biden's senior adviser for the coronavirus, said Tuesday that the world needs to "get to the bottom ... whatever the answer may be."

"We need a completely transparent process from China; we need the WHO to assist in that matter," Slavitt said. "We don’t feel like we have that now."