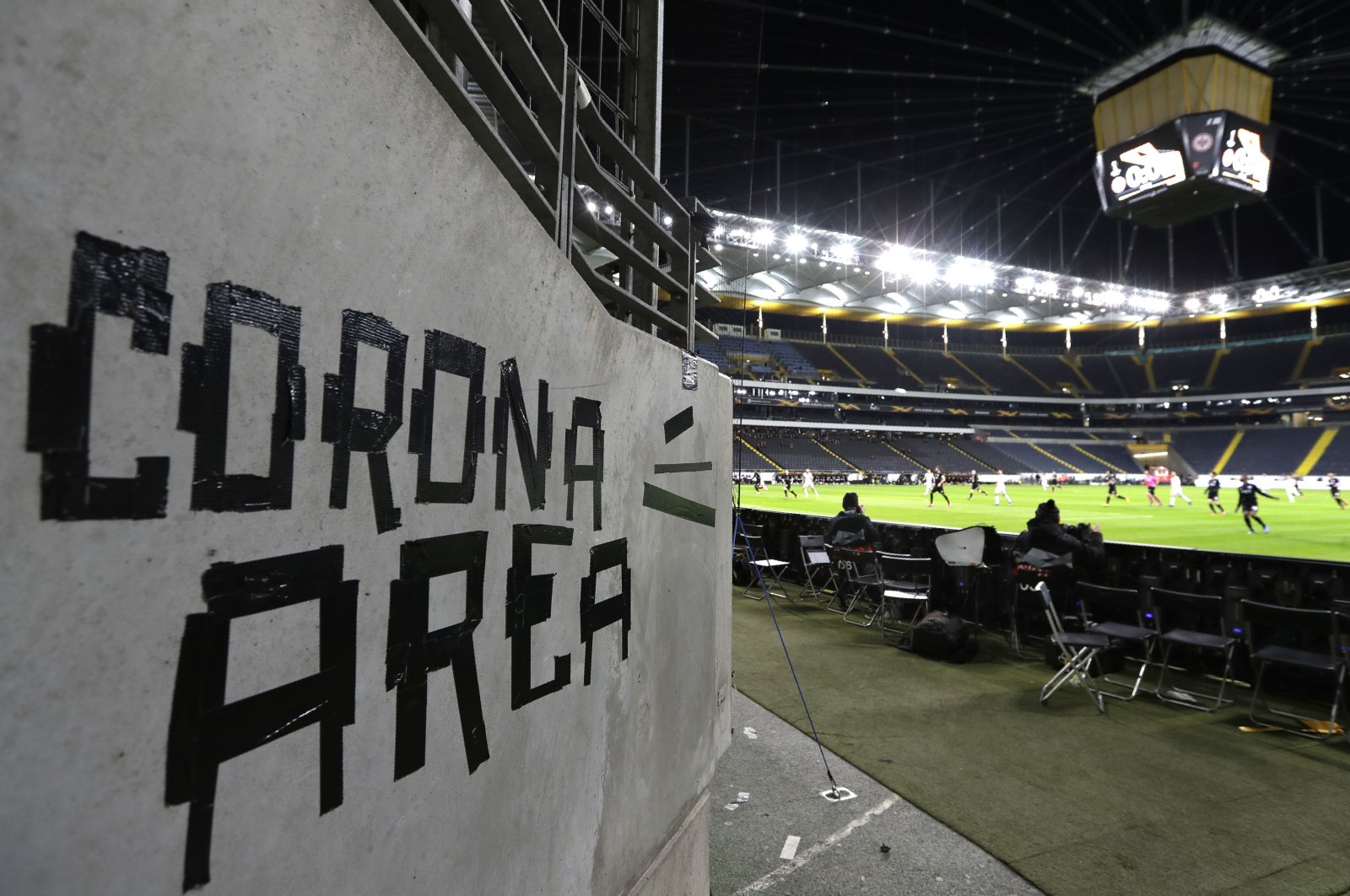 In this Thursday, March 12, 2020 file photo shows a sign taped by Eintracht fans on a wall of the stadium during a Europa League round of 16, 1st leg football match between Eintracht Frankfurt and FC Basel in Frankfurt, Germany. (AP Photo)
by Daily Sabah with Wires Mar 14, 2020 11:19 am
RECOMMENDED

As the novel coronavirus spreads across the globe, major entertainment events have been canceled or postponed in bid to curb the outbreak.

The World Health Organization (WHO) said it was "impossible" to predict when the virus, known as COVID-19, would peak globally, meaning more events could be affected amid increased restrictions on large gatherings.

The outbreak has ultimately brought the sports world to a halt.

In North America, all major leagues have halted their activities for at least a couple of weeks. The NBA, the NHL and MLS have all suspended their ongoing seasons, while the MLB delayed its 2020 season's opening day of March 26.

In motorsports, Formula One has canceled the Australian Grand Prix and postponed the next three races in Bahrain, Vietnam and China. Organizers hope to start the season in Europe at the end of May, putting the Dutch and Spanish races currently scheduled for May 3 and May 10 in Zandvoort and Barcelona in doubt. Four rounds of the MotoGP season in Qatar, Thailand, Texas and Argentina will also not go ahead as scheduled.

European football, however, has taken the biggest hit.

All matches in Europe's top five leagues – Spain, England, Germany, Italy and France – have been suspended. With WHO calling Europe the new epicenter of the COVID-19 outbreak, many pundits fear the national league tournaments could be canceled altogether.

Meanwhile, European football's governing body, UEFA, postponed all Champions League and Europa League games. Two Champions League games — Barcelona vs. Napoli, and Bayern Munich vs. Chelsea — had been planned for Wednesday. But there are travel restrictions between Spain and Italy, and Chelsea winger Callum Hudson-Odoi has tested positive for the virus. Eight Europa League games were scheduled for next Thursday, although only six first-leg games were played this week. Two games between Italian and Spanish teams were postponed because of travel restrictions. The quarterfinal draws in both competitions, scheduled for next Friday, have also been postponed.

UEFA faces an even bigger question Tuesday as officials are set to discuss a possible one-year postponement of the 2020 European Championship. The decision to postpone would push the congested football calendar beyond its limits and could even impact the 2022 World Cup in Qatar.

The same fate expects another big sporting event of 2020 – the Summer Olympics — which was still firmly on the calendar. The International Olympic Committee and the Tokyo organizing committee were not considering canceling or delaying the games, "absolutely not at all,” said Japan Olympics minister Seiko Hashimoto.

The fate of the Olympics is a daily topic as Japan's government struggles to bring the coronavirus outbreak under control. U.S. President Donald Trump made a suggestion to postpone the Tokyo Olympics for a year because of the spreading coronavirus.

South America's national football tournament, the Copa America, is the third major sports event scheduled for summer 2020. Coronavirus outbreak on the continent is not as widespread as in Europe, but it starts showing signs of spreading rapidly. Several South American football federations have suspended tournaments due to the virus.

Major music festivals have also been canceled or postponed, including the desert fest Coachella in California, which was pushed back until October. Live Nation Entertainment and AEG Presents, the world's largest live-entertainment companies, suspended all current tours through March, including those of Billie Eilish, the Strokes and Post Malone, a disaster for many artists and their crews, as well as local vendors and businesses who rely on income from concertgoers.

Organizers of Burning Man said they are closely monitoring the situation, but there were no changes in their schedule and the festival would start in a Nevada desert in late August.

In the U.K., a new ban on mass gatherings could affect events such as the Glastonbury music festival slated for late June.